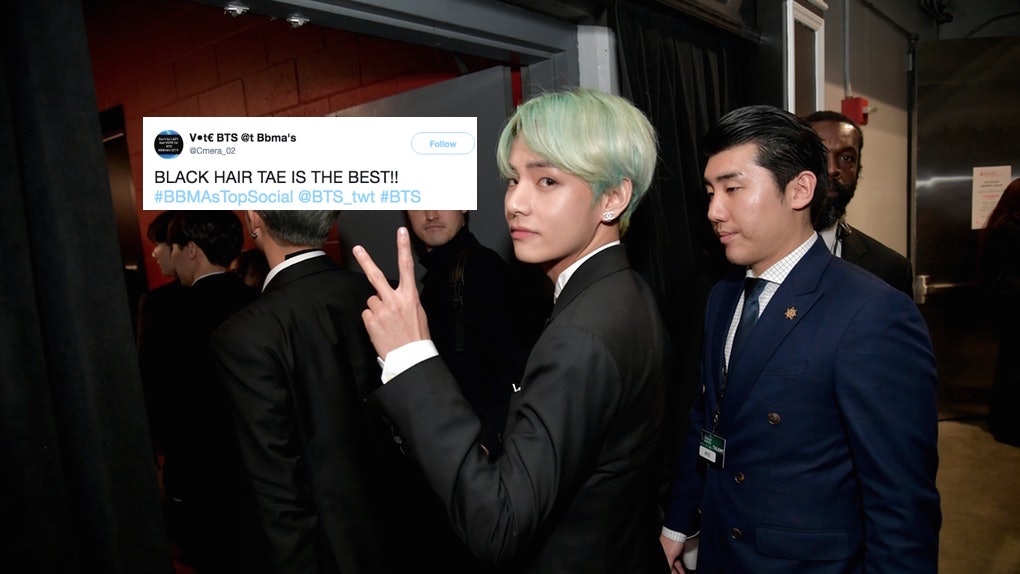 The BTS boys change their hair color more than I change my sheets. RM, Jimin, V, Suga, Jungkook, Jin, and J-Hope, outside of their music, are all known for their awe-inspiring fashion sense and their ever-changing hairstyles. Seriously, if you combined all the colors they've dyed their hair over the years since they debuted in 2013, you could make one hell of a pastel-colored rainbow. But a new color on one of the members is making fans swoon, and for once it's not a pastel or bright color. V from BTS' new black hair at the Fact Music Awards is simple and sleek, and fans in the BTS ARMY are loving the look.

The Fact Music Awards are a South Korean award show for which the winners are voted on by the fans. The awards all fall under the umbrella of rewarding artists who market their music well to their fans/have a good online presence with their respective fandoms. It was previously announced in March that BTS would be attending the award show, but not performing, leaving fans with only a few chances to catch a glimpse of the boys during the show.

Diehard BTS fans around the world stayed awake to catch the many livestreams and pictures of BTS on the Fact Music Awards red carpet, and that's when the swooning over V's new jet-black hair began.

Fans on Twitter are in love with V's new look (read: his gorgeous natural hair color).

Looking good, V! This is quite the quick hair change, though.

Just last week, V's hair was a bright blue while he and the other BTS boys were doing press for their new album, Map Of The Soul: Persona in New York City.

That is a straight-up electric blue. I don't even want to know how many hours it took to accomplish that color, let alone how many it took to get it back to black. Oof. Hair colorists are heroes.

Then, before the black hair and before the bright blue, V's hair was kind of like a sea-foam green color at the Grammys.

In BTS' Lotte Duty Free commercial that dropped in March, V was rocking bright red hair (indicating they probably filmed this baby back in December 2018).

And the photos of the BTS x Mattel fashion dolls reveal that V's doll's hair is the same half blond, half pink hair he sports in the "IDOL" music video.

The BTS ARMY was actually pretty unimpressed by doll-V's hair when the photos of the dolls were revealed. They felt that V's look in the "IDOL" music video was really iconic, and the doll interpretation wasn't up to scratch, but the fans were still thankful that the dolls were made, as it only helps to elevate the group's status as worldwide pop stars.

Safe to say V's hair evolution has been filled with frequent changes. Maybe his black hair at the Fact Music Awards was him setting his hair color back to neutral before changing it to another dramatic color? If V's hair history has taught us anything, it's that his hair color doesn't stay the same for too long. As for now, I'm enjoying this jet black stage, because as amazing as V looks in all the rainbow-inspired colors he recks on the regular, his natural color just sends.

More like this
Rosé From BLACKPINK's "Gone" Music Video Is The Ultimate Sad-Girl Aesthetic
By Abby Monteil
The 'Glee' Cast's Tribute To Naya Rivera At The 2021 GLAAD Media Awards Was So Moving
By Abby Monteil
How Long Has Billie Eilish Had Blonde Hair? She Hid It For Months
By Daffany Chan
Stay up to date