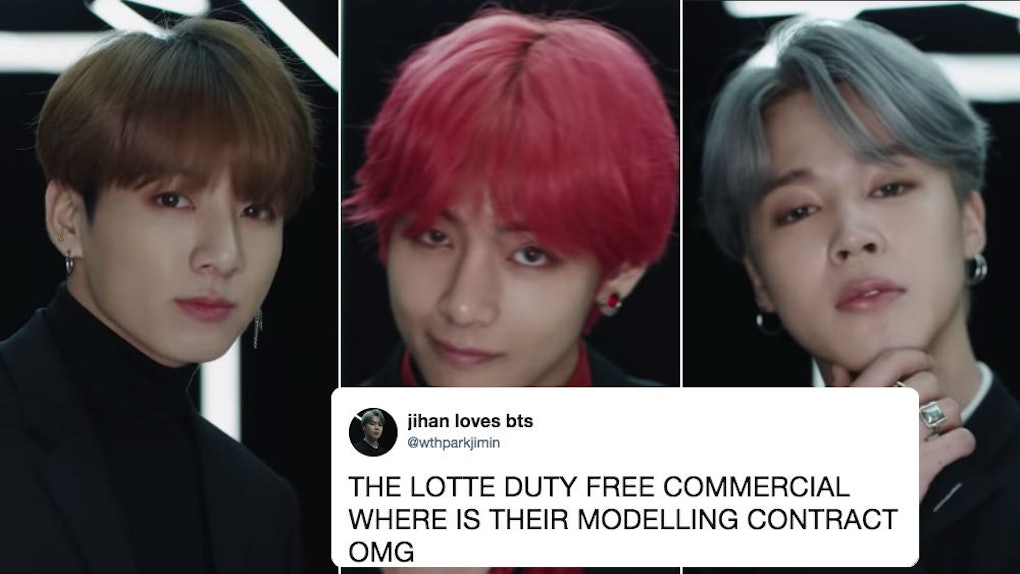 This Video Of BTS' Lotte Duty Free Ad Sees The Boys Walk A Runway Looking So Hot, It Hurts

Y'ALL, a commercial starring BTS just dropped, and it's literally the sexiest thing I've ever seen. The video of BTS' Lotte Duty Free ad is about to make the entire BTS ARMY lose their collective minds, if that hasn't already started. The commercial, created for a popular Korean sopping outlet, dropped on Monday, March 4, and it shows all of the BTS boys strutting their stuff down an amazingly-lit, L-shaped runway. The commercial only lasts 15 seconds, but oh, what a glorious 15 seconds it is.

The ad is one of several that the group has created with the brand. Before today's release, there were clips teasing the upcoming ad campaign showing BTS having fun behind the scenes. Now fans know what they were working on, and they are so pleased.

This ad comes the same day as the debut celebration of BTS' sibling group, TXT (aka, TOMORROW X TOGETHER). On Monday, March 4, the five-member group was debuted to the world along with their debut single, "Crown." TXT is part of BTS' label, Big Hit Entertainment, and is the first new group to be created under the BTS/Big Hit Entertainment umbrella. Jimin even sent the new group a congratulatory tweet to celebrate the big day. Safe to say it's been a busy day for the BTS fandom!

I think they're fans? lol.

The video starts out with a group shot of the BTS boys — Jimin, RM, V, Jungkook, Suga, Jin, and J-Hope — from behind walking toward the set. Then, V and Jimin (heartthrobs extraordinaire) walk down the runway first. They all take turns walking down the runway in a way that I can only describe as putting on the smolder.

Jimin with the smolder!

V with a stare that goes straight into your damn soul.

RM making you shake in your boots!!

Justice for Suga, who only got one blink-and-you'll-miss-it moment where he blew a kiss to the camera. A moment to be cherished, nonetheless.

J-Hope killing me softly with this look.

I'm gonna need a tonic for this Jin.

JungKook, who gave you the right?!

The fandom has been abuzz lately, as Live Nation announced that the group has officially added more tour stops to their Love Yourself: Speak Yourself world tour. Exciting!

As of Friday, March 1, BTS had completely sold out all the announced stops on their stadium tour. But on March 2, Live Nation announced that more tour dates had been added due to popular demand, with tickets for the newly announced dates going on sale on Friday, March 8.

The three new shows will be on May 5 at the Rose Bowl Stadium in Los Angeles, May 12 at Soldier Field in Chicago, and May 19 at the MetLife Stadium in E. Rutherford, NJ, according to Live Nation's announcement.

So if you haven't had the chance to catch the BTS boys on this current tour and you live in the U.S., you have one more chance to snag tickets when they go on sale this Friday. But don't worry if you miss this tour, BTS is going to be around for at least seven more years.