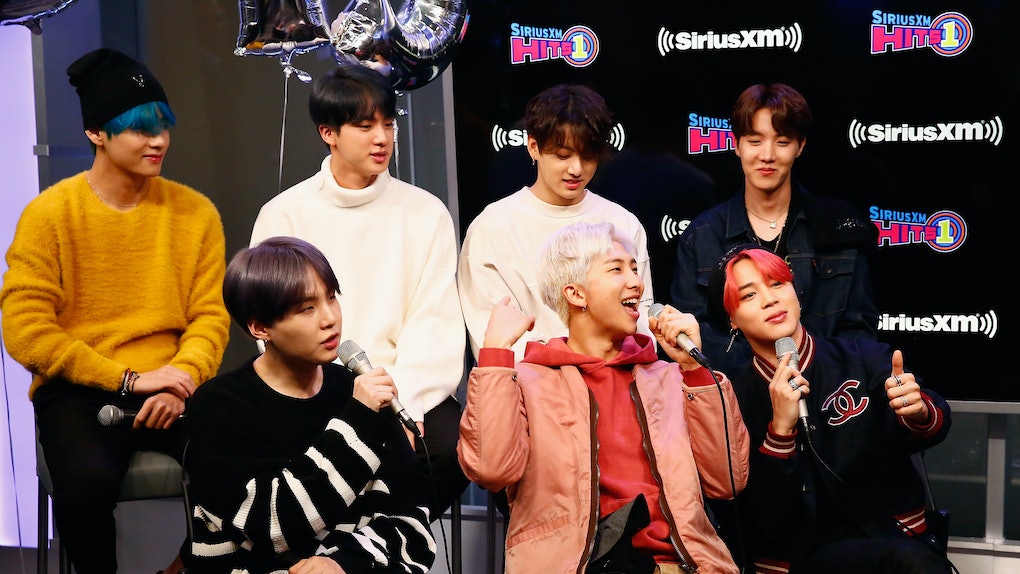 Get ready, BTS fans! There's another award show to catch your favorite boys attending. South Korea's Fact Music Awards are coming up this Wednesday, April 24. The show will start at 6 a.m. in the U.S., so if you're so committed to BTS that you'll wake up in the wee hours of the morning to see their appearance at the show, here's how to stream the Fact Music Awards.

It was previously announced in March that BTS will be attending the Fact Music Awards on April 24. While they aren't slated to perform during the show, fans will hopefully still get the chance to see them strut down the event's red carpet in all of their amazingness. While the red carpet isn't streaming online, fans might be lucky enough to get pics of BTS in all their glory.

Before the show goes down, though, let's run through what the Fact Music Awards are in the first place, since it's an unfamiliar award show for American audiences.

The Fact Music Awards, according to AllKPop.com, awards Korean artists who interact positively with their fans throughout the year. It's all about appreciating fandoms and how they support music artists, which the BTS ARMY will surely appreciate, given their unwavering support and love for the group they display on social media. The event is broadcast solely online and will be hosted by Fan N Star, and its awards all fall under the umbrella of marketing toward the fans.

BTS definitely has a good relationship with their fans online, so it's no surprise that the group will be attending this award show come April 24.

Voting for the award show has already closed, so the broadcast will be honoring the winners as determined by the fan voting results. BTS has won the U+ Idol Live Popularity Award, and came in a close second for the Fan N Star Choice Award behind Super Junior, another all-male K-Pop group.

So here's how you can stream the Fact Music Awards: Fans can head over to VLive.com, where a livestream will begin at 6 a.m. EST and 3 a.m. PST on the morning of Wednesday, April 24. Which means, at the moment, there's only a stream for the actual award ceremony.

Considering BTS won't be performing during the award show, the red carpet will be the place where fans can see the best shots of RM, Jimin, V, Suga, Jungkook, Jin, and J-Hope, but, as I mentioned, there's no official stream for that part, so keep your eyes on Twitter for any pictures! The red carpet will be starting at 5 p.m. Korean time, which is 4 a.m. EST and 1 a.m. PST. So if you're an East Coaster wanting to keep an eye out for red carpet pics, you'll have to wake up super early. If you're a West Coaster, staying up late is your best bet.

The fun thing about this award show is that its winners are determined by you, the fans, so if you can catch the show (more power to you for being awake that early and/or late), it'll be a fun experience for the BTS fandom.