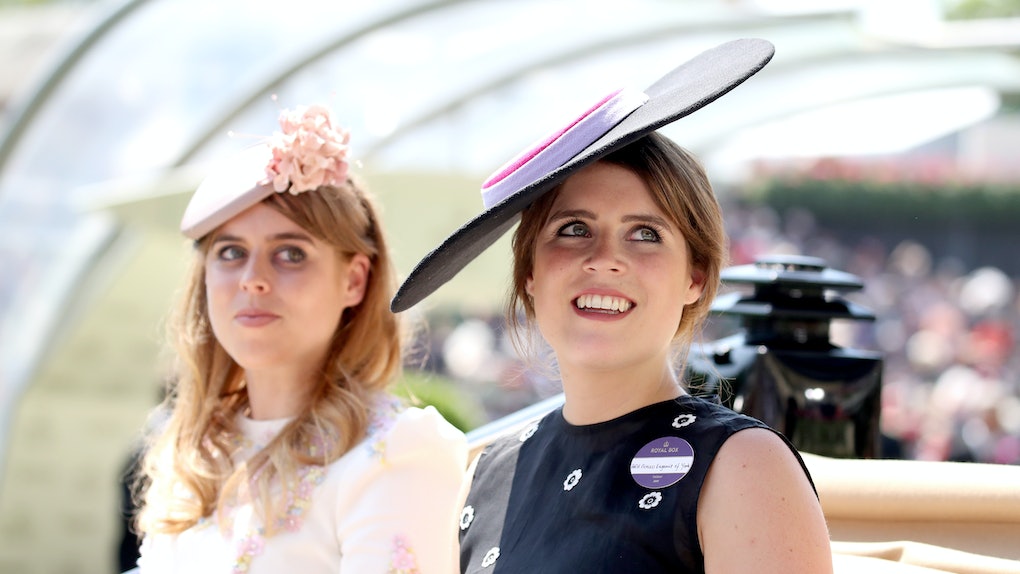 I’ll be the first to admit that as an only child, I’ve long been jealous of anyone who has a sister, but that envy reached a new level today. Why, you ask? Because Princess Eugenie’s Instagram post about Princess Beatrice’s engagement is full-on #FamGoals, that's why. Honestly, when you get engaged, what’s better than a sister’s well wishes? And if you ask me, Princess Eugenie crushed it. Not only did she congratulate her sister on this major milestone, but she did so in a way that was warm, personal, and genuine. In fact, she even used her affectionate nickname for her sister — “Beabea.”

But if, for whatever reason, you’re behind on the big news (and the even bigger rock) yet, let’s take a step back. On the morning of Sept. 26, an announcement about the engagement of Princess Beatrice to Edoardo Mapelli Mozzi was posted to The Duke of York's website. Buckingham Palace’s post revealed that Mozzi proposed to Her Royal Highness in Italy earlier in September and that he collaborated with British jewelry designer Shaun Leane on designing the ring (more on that later). Within the announcement, Princess Beatrice and her betrothed added their own comment: “We are extremely happy to be able to share the news of our recent engagement. We are both so excited to be embarking on this life adventure together and can’t wait to be married. We share so many similar interests and values and we know this will stand us in great stead for the years ahead, full of love and happiness.”

Princess Eugenie is one of the very few royals to maintain her own Instagram page, and she wasted no time before sharing her feels on the news. In an Instagram post on Sept. 26, she wrote: “Beabea — wow! I'm so happy for you my dearest big sissy and dear Edo. It's been a long time coming and you two are meant to be.” The best part? Eugenie’s post includes a series of stunning photos of the engaged couple that she took herself. The first two shots show the couple embracing and looking very much in love (as in, they’re a literal heart-eyes emoji), and the third and final shot is a close-up of the jaw-dropping ring. And there it is, fam — yet another reason why a sister can come in handy (for taking new photos with the bomb lighting, of course).

BTW, this isn’t the first time that Eugenie has posted about her sis on the ‘Gram. On Thursday, Aug. 8, she posted a series of adorable childhood photos and wished Beabea a happy 31st birthday. Oh, she also mentioned in the caption that her big sis has been “bossing it” since before she was born, and TBH, I’m adopting that phrase stat.

Eugenie isn’t the only person who shared their sentiments about the engagement on Instagram, either. Princess Beatrice’s hubby-to-be, who’s the CEO of architecture/design studio Banda Property, posted a series of photos to his Instagram with an equally heartwarming caption: "You will never be alone my love, my heart is your home. Hand in hand, today, tomorrow and forever.” I mean, the multi-millionaire property tycoon definitely has a way with words.

Sarah Ferguson, the Duchess of York, also commented on her daughter’s engagement on IG. The proud mama wrote, “I know what a mother feels so I have tears of joy. I am so proud of this sensational news. Andrew and I are just the luckiest people ever to have two great sons in law.” Fergie, as she’s widely known, shared a few of Eugenie’s outdoor shots, as well as some black-and-white photos of the lovebirds taken by professional photog Misan Harrimanat the Royal Lodge in Windsor Great Park. In reference to Eugenie’s photos, the Dutchess wrote, “My girls are so close. Beatrice and Edo wanted her to capture this special moment.”

And rounding out all of the epic Instagram posts about this royal engagement is one by jewelry designer Shaun Leane, who shared a close-up photo of the platinum and diamond ring and revealed that it’s “a fusion of Victorian and Art Deco designs, and is accompanied by two additional matching bands.” In a previous post that includes Eugenie’s pics, he wrote that he was "so honored" that Edoardo chose to work with him on the ring, and to have been "involved in this special moment in their lives.” He added, “The bespoke experience was a beautiful journey; from imagining the design with Edoardo to the crafting of the finished rings. Being able to incorporate both Edoardo and Princess Beatrice’s characters into the design has resulted in a unique ring that represents their love and lives entwining."

Given all the social media love she's gotten, Princess Beatrice must be feeling encouraged and supported as she embarks on this exciting new chapter.

And it looks like we won’t have to wait long for all those royal wedding deets because Buckingham Palace reported that the Queen’s granddaughter will be tying the knot sometime in 2020.

In the meantime, perhaps Eugenie will be giving her little sis some wedding planning tips. After all, she walked down the aisle nearly a year ago, on Oct. 12, 2018. The Duchess of York’s daughter got married at St. George's Chapel at Windsor Castle, which, it’s worth noting, is the venue at which Meghan Markle and Prince Harry exchanged vows.

Will Beatrice and her groom-to-be get married at the very same castle? It’s too early to tell. But one thing’s for sure: We’re definitely in for some killer social media posts about the big day. I, for one, think that’s a valid reason to keep those eyes peeled on Instagram.