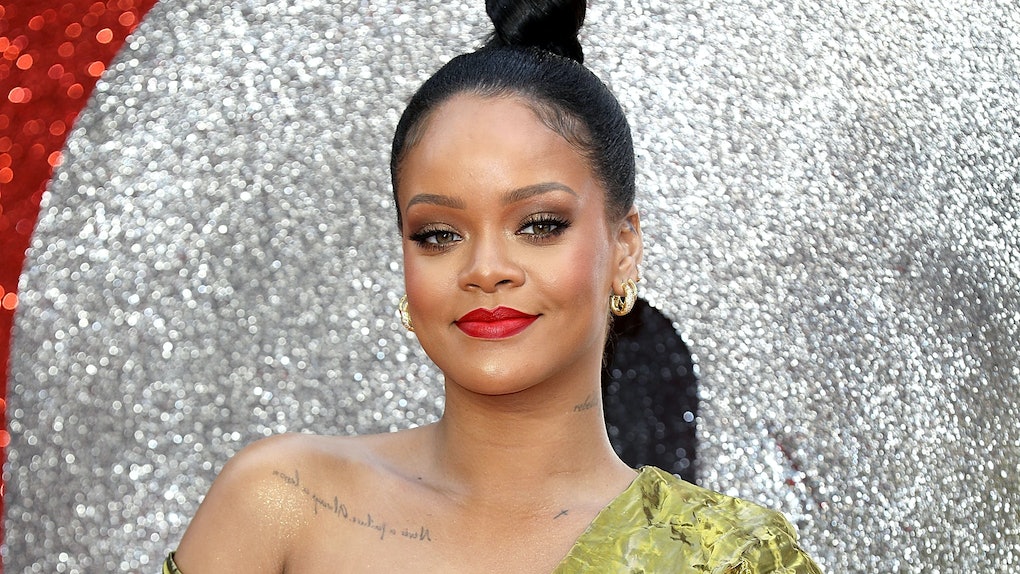 Photos of Rihanna's Blonde Hair Have Twitter In An Unapologetic Frenzy

Rihanna is quite the chameleon when it comes to her beauty looks. The singer has been known to rock a rainbow of hues in the past, though not for a few years. Always one to keep her fans on their toes, however, photos of Rihanna's blonde hair are shaking the internet to its core.

It's understandable that Rihanna has been keeping her hair its natural brown color lately; she's had a lot going on. Between launching multiple Fenty Beauty products, a Fenty Beauty pop-up shop, Savage x Fenty lingerie, acting in the Ocean's 8 movie, plus hosting the Met Gala (which she attended dressed as the Pope), she performed at the 2018 Grammy Awards, and she celebrated her 30th birthday (wearing an "I Hate Rihanna" T-shirt, nonetheless). I'm already exhausted just thinking about all of those things, I can't imagine where RiRi would've found the time to change up her hair color in the midst of all that.

Rihanna has given herself the reputation of never being one to remain stagnant, however, so it's about time she debuted a new hair hue. Despite the fact that she's rocked bolder styles such as a bright red cut in the past, this style is surprisingly soft.

Rihanna posted a photo of herself on her Instagram Story wearing a very long, blonde wig! At first look, I thought it was a finished look, and RiRi was going for a somewhat sultry vibe. After more careful viewing, however, I realized that the singer was actually poking fun at the fact that the lacefront part of her wig had not yet been properly applied. "What frontal?" wrote Rihanna, joking at the fact that the mesh on her wig is humorously obvious.

Rihanna's hair stylist, Yusef Williams, has not yet commented on the singer's long blonde locks, either. Despite the mystery of whether or not the longe blonde wig is Rihanna's finished look (will she cut it? Add more color?) Twitter already has lots of wild thoughts about it.

"Rihanna has gone blonde. I knew my queen would lead me to the right decision," it's never not a bad idea to follow in Rihanna's style footsteps.

"Rihanna is blonde. I need to go blonde now, too," because do as RiRi does.

"Rihanna hasn’t been blonde in years and if she doesn’t post more pictures well we’re gonna have a problem," for real though, I need more info.

"Demi and Rihanna return blonde hair at the same time is it means a collab??!?!" Is there a connection to Demi Lovato's blonde hair??

"Wait why did Rihanna and Demi go blonde at the same time omg I need to go back to sleep," tweeted another fan, wondering if there was a connection between the two singers lighter hairdos.

"Demi and Rihanna are both blonde. Their minds. They interlocked and did something," the theories poured out.

"Rihanna is blonde today. Something is about to happen to us," tweeted one curious follower.

No matter the reason for the new style, pretty much everyone was loving it.

More like this
For These 3 Black Streetwear Designers, The Hype Is Long Overdue
By Jacorey Moon
Kim Kardashian With Blonde Hair & Bleached Eyebrows Is A Total Surprise
By Margaret Blatz
Is SPF In Makeup Enough? Experts Break Down Whether Or Not It's Strong Enough
By Margaret Blatz
Stay up to date