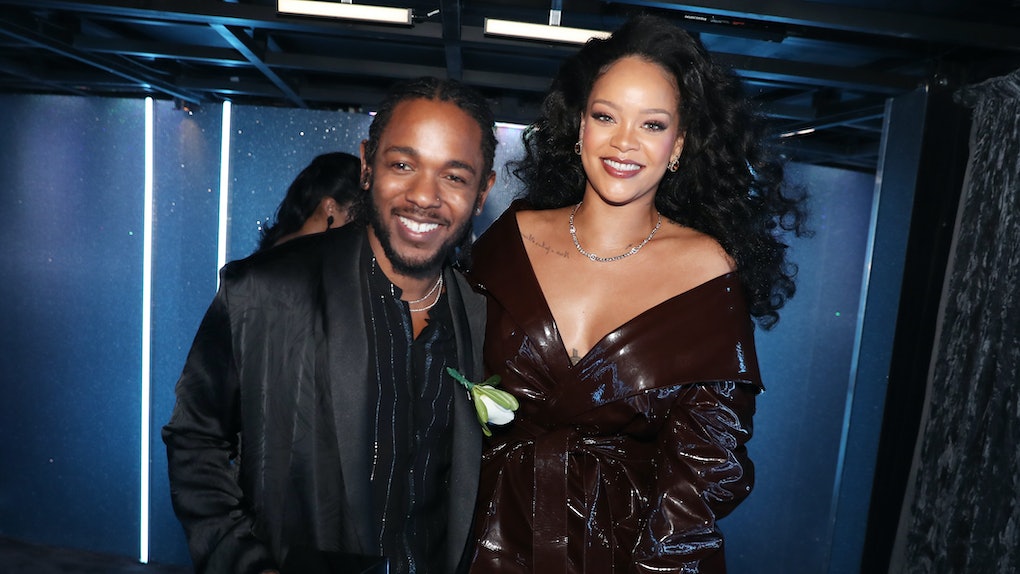 Rihanna has dominated the Grammy Awards in years past, this year she doesn't have much eligible music for the ceremony, but it wouldn't be a night in music with out the bad girl. She is there to perform, but Rihanna's 2018 Grammys look is already stealing the show.

In 2017, Rihanna was nominated for eight Grammys, although by some evil magic she didn't win any. RiRi is nominated for only one Grammy this year — Best Rap/Sung Performance for her work on Kendrick Lamar's song "Loyalty" — but it's due to the fact that she's been busy taking over the rest of the world, not any musical snubbing. Rihanna has released multiple Fenty beauty products in the mere four months since she first dropped the eponymous line (Fenty is Rihanna's last name, and Rihanna is actually her middle name, much of the internet didn't realize that). Basically, Rihanna is a busy woman and the world is lucky that she has deigned to take time out of her schedule to grace us with her presence at the 2018 Grammy Awards.

When Rihanna shows up anywhere, even the Grammys, is anyone really talking about her music? The woman is a style icon, literally, she won the CFDA Style Icon Award in 2014 — remember Rihanna's sheer sequined gown? So it should come as no surprise to you that RiRi's Grammy's look is equally fab.

After skipping the red carpet this year, Rihanna unveiled her bold futuristic look on the stage after accepting an award for "Loyalty" with Kendrick Lamar for Best Rap/Sung Performance.

Rihanna attended a pre-Grammys MusiCares event and was prepping her fans for her fire performance. RiRi wore fire-themed boots by Vetements, a black T-shirt and leggings, and finished off the red hot look with flame-shaped sunglasses by JZhong. At one point in the evening, Rihanna also wore a flame-printed fur coat. To appreciate Rihanna's current Bad Girl vibes, take a look back at her Grammy looks from years past and see her style evolution:

Rihanna practically redefined what a crop top is and should be with this orange bra-top that looks like it was made to show off her tattoos. The top and skirt are both by Armani Privé, and please let me know if you know someone else who could pull off that skirt because as far as I'm concerned, Rihanna is the only girl (in the world) who could.

2015 Rihanna was even pouffier than 2017, but don't doubt that she looked just as fierce. RiRi stood out like the princess that she is in this Giambattista Valli gown, Kendall Jenner loved the look so much she even recreated it at the 2018 Golden Globes.

Rihanna full on slayed in this ethereal red Alaia gown. You don't understand, this is an Alia. An a-what-a? Yup, that same designer that Cher Horowitz almost risked her life for.

RiRi slayed in another Armani gown. This time it was a simple, sexy black dress with a seriously low-cut V-neck.

I think you can agree with me that 2011 may have been when Rihanna started taking the epic fashion risks that she is now infamous for. This Jean Paul Gaultier gown was a polarizing outfit, to say the least.

2010 was a pretty edgy year for the songstress too, though. This was pre-most of her now-infamous tattoos, but she managed to still look like the natural bad girl that she is in this Elie Saab getup.