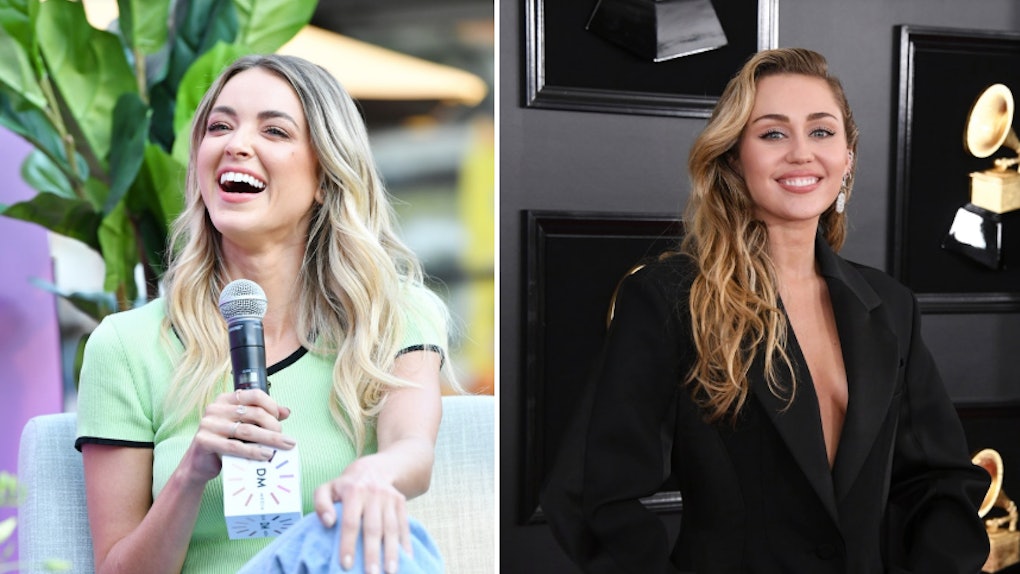 As much as I’m still in mourning over Miley Cyrus and Liam Hemsworth’s split, I’m also kind of digging her new reported fling with Kaitlynn Carter. It’s unclear what exactly their rumored relationship status is at this point — a casual situation or something more? — but it’s obviously really heating up. Miley Cyrus and Kaitlynn Carter’s zodiac signs reveal that their future together is a little uncertain… so I guess time will tell if this couple is here to stay.

To catch you up to speed, Cyrus and Carter have been linked since Aug. 10, when they were reportedly photographed kissing during a vacation to Italy — the same day that a rep for Cyrus announced her separation from Hemsworth. The devastating breakup news went hand-in-hand with the hot new gossip about Carter and Cyrus making out. Hemsworth addressed the split directly in an Instagram post, and then Cyrus released the song “Slide Away” on Aug. 16 that seemed to address her feelings about the relationship ending. Then, just a few days later, Hemsworth reportedly filed for divorce.

I know, I know — it’s heartbreaking stuff. But in more exciting news, Cyrus and Carter reportedly can’t keep their hands off each other. They were spotted making out again on Aug. 16 at SoHo House in West Hollywood, and they reportedly had dinner with Cyrus’s mom the next day. So, what’s going on here? While neither Cyrus or Carter has commented publicly on the state of their relationship, it sure looks like they’re together at this point. To get some clues into their undeniable connection, let’s look at their birth charts, shall we?

Cyrus is a Sagittarius, born on Nov. 23 — a fire sign that loves to seek adventure and constant change. Sagittarians are naturally effusive and draw others toward them, and they like to keep their lifestyles and interests ever-evolving. Dating a Sagittarius means signing up for a whirlwind of fun, and also sometimes a world full of drama. This sign often struggles with commitment, but when they find the right person who can help them learn and grow, they dive all in.

Carter, meanwhile, is a Virgo, born on Sept. 4. Virgos are much more low-key, and they prefer a life of stability, consistency, and security. Virgos are extremely loyal, and they’re always striving for improvement, but sometimes they can become overly critical when things don’t go perfectly as planned. A Virgo typically seeks a partner who will encourage and support them to be their best selves.

When you examine these two signs in a relationship, they might not seem like the most ideal match at first. After all, fire and earth signs have extremely different overall approaches to life. But in the right partnership, they can push one another out of their comfort zones and really grow as a couple. A Virgo and Sagittarius couple may have some initial challenges as they learn to accept one another’s approaches to love — a Sagittarius could find a Virgo too boring, while a Virgo could become frustrated with a Sagittarian’s reluctance to settle down. But if they are able to come to a place of shared understanding, and adjust to meet the other’s needs (which both signs are good at), they will open the world up to one another.

This explains why Carter and Cyrus seem to have such sizzling chemistry. They’re likely attracted to their contrasting perspectives and excited about what they can learn from each other. It’s too soon to tell whether they can learn to overcome their differences, but for the time being, it seems like they can’t get enough of one another. And really, who doesn’t love a hot girl summer?