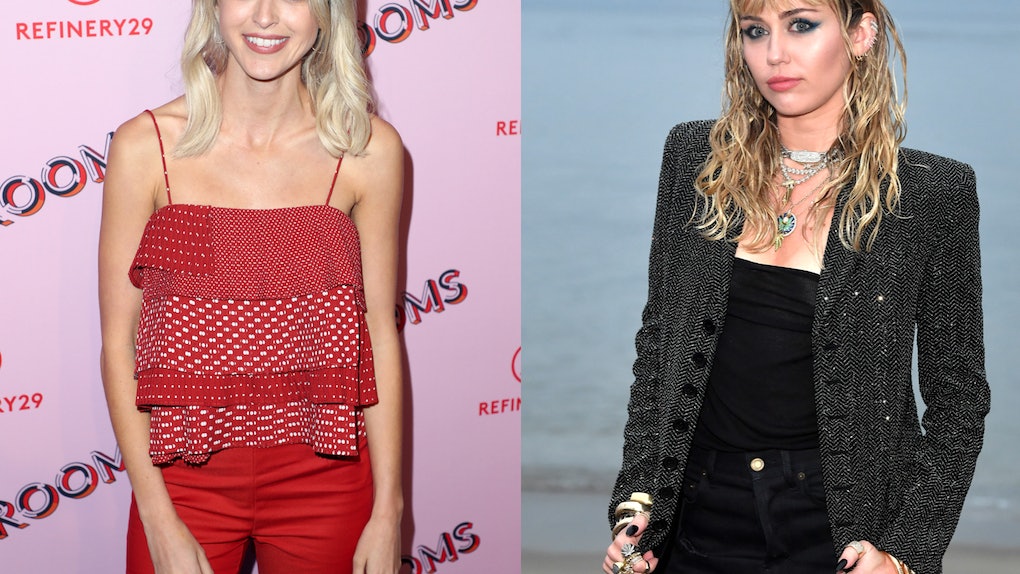 If you're a little chilly right now, don't worry. Miley Cyrus and Kaitlynn Carter's reported relationship update is about to heat things right up. According to Page Six, Cyrus and Carter were reportedly "basically having sex" at Soho House in West Hollywood on Aug. 16, just a few hours after Cyrus dropped her new song "Slide Away" that fans believe is likely about Liam Hemsworth. Elite Daily reached out to reps for both Carter and Cyrus and did not hear back in time for publication.

“They were obsessed with each other. They couldn’t keep their hands off each other,” a source told Page Six. “They were kissing and making out everywhere. In the bathroom, at the bar, in the middle of the floor. They were basically having sex. There’s no question they’re together.”

The source also added that "they were making out all over the place, and didn’t care who saw."

A day after their reported PDA at Soho House, TMZ reported that Cyrus introduced Carter to her mom, Tish Cyrus. According to TMZ, Cyrus was pictured riding shotgun while her mom drove and Carter sat in the back seat. The three reportedly dined together at a restaurant in West Hollywood.

Fans started speculating that there was trouble in paradise for the newlyweds when Cyrus posted a picture of herself on Instagram on Aug. 10 sans engagement ring or wedding band.

Finally, a rep for Cyrus confirmed the split to People. This all took place on the same day, you guys. Aug. 10 was a pretty major day. "Liam and Miley have agreed to separate at this time. Ever-evolving, changing as partners and individuals, they have decided this is what’s best while they both focus on themselves and careers," the rep told People. "They still remain dedicated parents to all of their animals they share while lovingly taking this time apart. Please respect their process and privacy."

Three days later on Aug. 13 Hemsworth, who Page Six reports was “devastated” and “blindsided” by the pictures of Cyrus and Carter in Lake Como, took to Instagram to confirm the split on his end. Alongside a gorgeous photo of a sunset, Hemsworth penned this caption:

Carter's ex Brody Jenner also took to Instagram on Aug. 17 to tell people to stop hating on his ex. "There is far too much negativity being directed at someone who I love and care about very much. I feel the need to set the story straight. Kaitlynn and I have been best friends for 6 years, and we continue to be," he wrote. "We, like many others before us and many after us, grew in different directions over those same 6 years. Kaitlynn is a wonderful person, beautiful and fun to be with, always a positive force in my life. We decided the best move for both of us was to keep our love for each other strong but move forward separately with our lives. I respect Kaitlynn and care deeply about her. She deserves to be able to move forward in her life with respect and happiness."

OK, looks like all the exes are moving forward. Let's let Carter and Cyrus make out in peace!

More like this
Who Has Noah Cyrus Dated? Her Relationship History Is So Dramatic
By Corinne Sullivan
The 25 Sexiest Comments Made By Celebrities On Their Partners' Instagrams
By Corinne Sullivan
Alex Rodriguez's Instagram For His Daughter's Birthday Contains Two Jennifer Lopez Photos
By Candice Jalili
Stay up to date