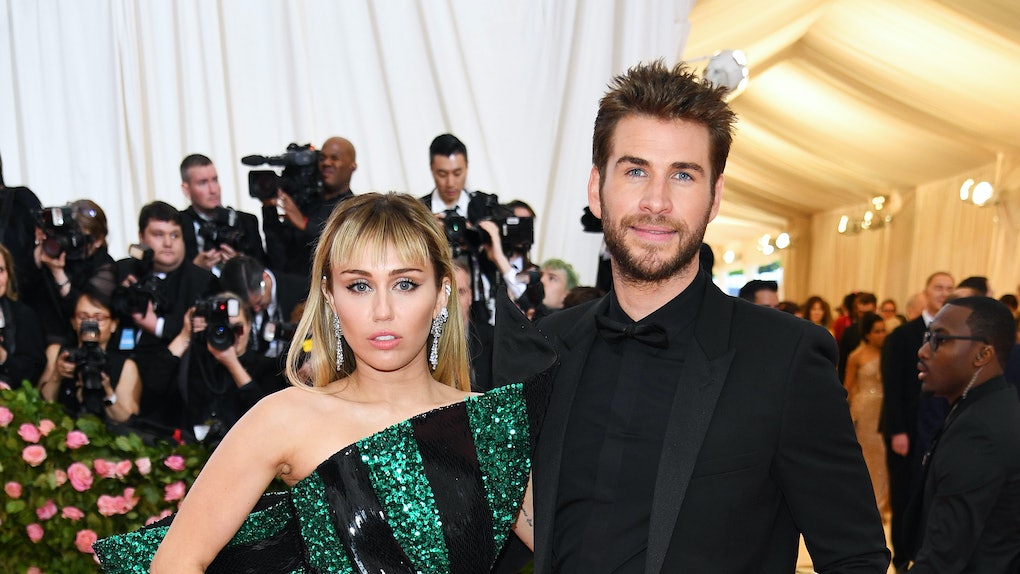 A longtime Hollywood couple just called it quits. After less than a year of marriage, Miley Cyrus and Liam Hemsworth have broken up, per a statement from the actress's rep. Elite Daily reached out to Cyrus and Hemsworth's reps for comment on the reports, but did not hear back by the time of publication.

In a statement to People on Saturday, Aug. 10, Cyrus' rep said, "Liam and Miley have agreed to separate at this time. Ever-evolving, changing as partners and individuals, they have decided this is what’s best while they both focus on themselves and careers. They still remain dedicated parents to all of their animals they share while lovingly taking this time apart. Please respect their process and privacy."

The news comes less than a year after the off-and-on couple tied the knot in an intimate ceremony at the singer's home in Tennessee. However, it was a rocky road to the altar for the The Last Song co-stars, who first locked eyes when Cyrus was only 16 and Hemsworth was 22 back in November 2009. While the pair battled a few public breakups and reconciliations over the course of their decade-long relationship, they ultimately tied the knot in December 2019 shortly after losing their Malibu home in the Woolsey Wildfires.

"I think it’s very confusing to people that I’m married. But my relationship is unique," Cyrus recently explained during a July interview with Elle. "And I don’t know that I would ever publicly allow people in there because it’s so complex, and modern, and new that I don’t think we’re in a place where people would get it. I mean, do people really think that I’m at home in a f**king apron cooking dinner?”

Cyrus also got real about why being in a heteronormative relationship doesn't change her sexuality during the interview.

"This is the person I feel has my back the most," she continued. "I definitely don’t fit into a stereotypical wife role. I don’t even like that word."

Rumors first started swirling that the couple's marriage was on the rocks after Cyrus was photographed without her ring while vacationing with Brody Jenner's ex, Kaitlynn Carter, in Lake Como. Shortly after, numerous news outlets reported that the "Mother's Daughter" songstress was seen kissing the The Hills: New Beginnings reality star and that things appeared to have taken a romantic turn during their European getaway.

"They were fully on a date, getting drinks, just the two of them," an insider told ETOnline, adding, "They even got a couple of massages at the hotel." Elite Daily previously reached out to Cyrus and Carter's reps about the reported dalliance, but did not hear back.

Unsurprisingly, stans of the couple are devastated by the news and still struggling to process it all.

While Hemsworth has yet to comment on their breakup, it looks like Cyrus is publicly moving on, whether we like it or not. While there's no telling whether this separation is permanent at this time, here's hoping that they both find the happiness that they're looking for.

More like this
I Tried Singing While Running Like Miley Cyrus & OMG, My Lungs
By Rachel Varina
Are Demi Lovato & Noah Cyrus Dating? They're Reportedly "Hanging Out"
By Joyann Jeffrey
Who Has Noah Cyrus Dated? Her Relationship History Is So Dramatic
By Corinne Sullivan
Stay up to date