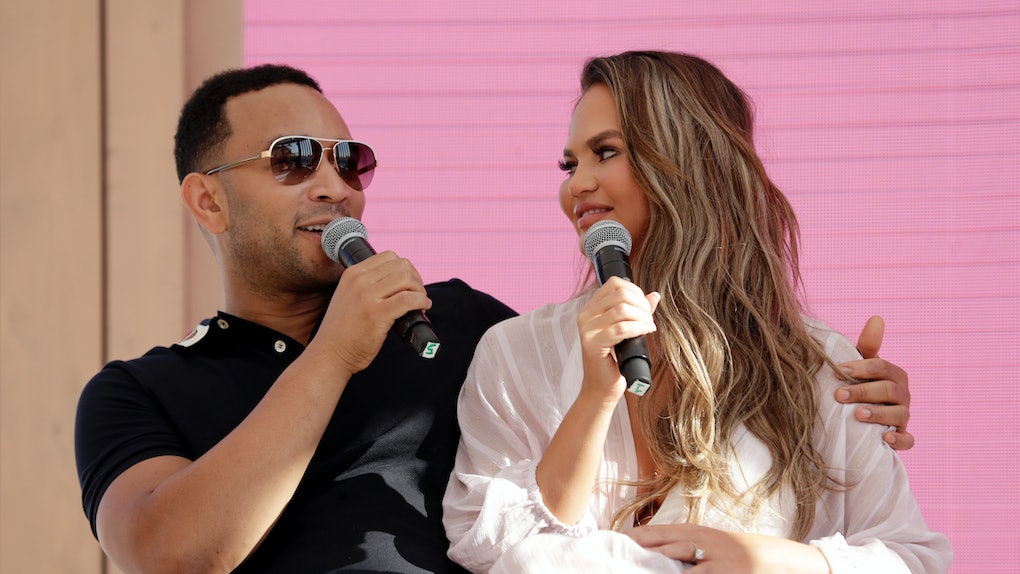 The entertainment industry may be home to celebrity couples who make it seem like perfection is the norm (it's not), but not every Hollywood duo would have you believe their relationship is something out of a Nicholas Sparks book. John Legend and Chrissy Teigen are one such couple. They're honest about so much when it comes to their relationship, from how they met, to their arguments and their undeniable love. It's awesome to see, and on June 18, they gave their fans a front row seat. John Legend and Chrissy Teigen playfully argued on stage in Cannes during a Twitter livestream, and it was relatable AF.

During the livestream, Teigen and Twitter CMO Leslie Berland sat down on the beach and went "Behind the Tweets," opening the floor for people to #AskChrissy whatever they wanted. About 15 minutes into the talk, they began playing a game where Berland would say one word and Teigen would have to say the first thing that came to her mind. When Berland said "love," Teigen immediately said "John," and then went on to explain they had been arguing all day.

"He's in trouble today, too," Teigen said. "We've been fighting all day. You know those days... where every little thing annoys you? He keeps stepping on my feet. We keep having the same fight over and over again where he doesn't listen to something I said weeks ago, and he pretends I never said it." Then Berland invited Legend on stage, and Teigen joked, "Oh, now we have to pretend to be happy... I hate him today," then sarcastically added, "Hi, baby."

As Legend joined her on stage, Teigen continued, saying, "I'm glad you guys get to see this side, because on red carpets people are always like, 'You guys are so [cute,]' [and] I'm just like over it." Legend then chimed in, adding, "She still loves me," and gave her a kiss on the cheek. After a couple of minutes exchanging questions, Legend told the audience and livestream viewers why he and Teigen had been arguing. "I stepped on her foot twice," he joked. "I spoke without knowing my schedule and told her I would go to an event with her, but I couldn't go to it, once I looked at my schedule." And then Teigen added that's one of the few ongoing arguments in their relationship.

"A lot of our fights revolve around — we don't have them often — scheduling, communication, or 'You told me this, but I was holding Luna, and I was baking cookies at the same time, how was I supposed to listen to this and have a conversation?!'" Teigen previously told Good Housekeeping. She also explained that their different ways arguing styles help them move past disagreements quicker. "I get very passionate, I get very loud, and he's very much a diffuser," she told the publication. "But in the end, we're both apologizers; we don't like to dwell on the same thing."

So, in case you needed any more proof that Teigen and Legend are just two people in a relationship who have to put in the work like everybody else does, there you have it. Nothing is perfect, no matter what it looks like on Instagram.