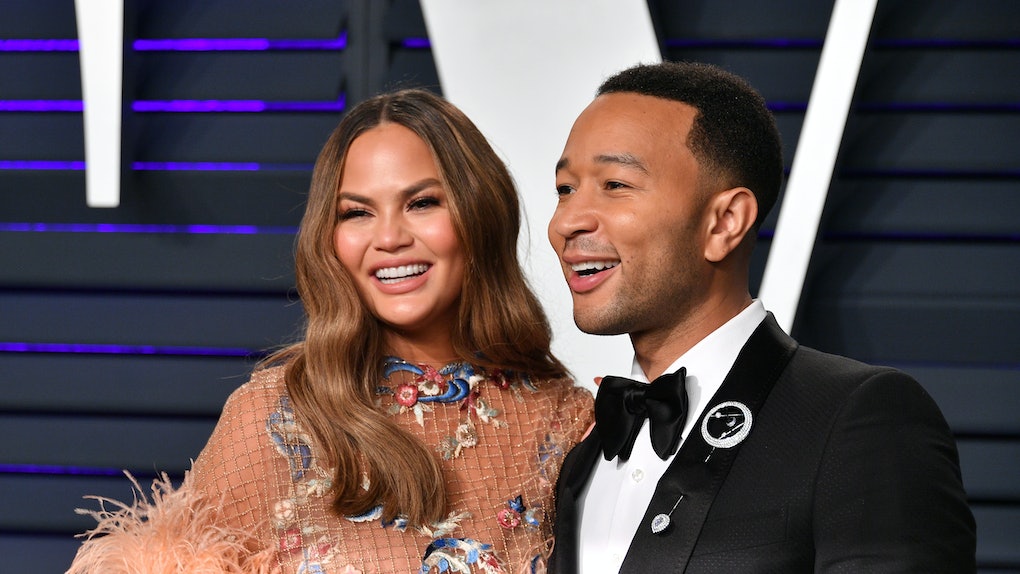 When I think of some of Hollywood's most iconic couples, Chrissy Teigen and John Legend immediately pop into my head. I don't know what it is about them — their constant trolling of each other, their precious pictures together, their gorgeous family — but they just make me so happy. So, of course, I want to know every last detail about them, like how did Chrissy Teigen and John Legend start dating? A couple with that much chemistry, you'd think they would've fallen in love instantly, but as it turns out, that wasn't the case.

"It was at least lust at first sight for both of us and then, you know, obviously it developed in that day and that moment," Legend said during the June 10 episode of Access Live. "We had instant chemistry that day, and then we started dating not long after that, and here we are, married with two kids." While they started dating shortly after meeting on the set of his "Stereo" music video in 2006, Legend explained he couldn't really pinpoint their first date. "We hung out that day and night, and then hung out. That's as the kids say. And then we started going on trips together not long after that because we didn't really live in the same city. I was living mainly in New York, she was mainly living in L.A. and so we would just meet."

Legend said he and Teigen traveled a lot. "She would come meet me out on the road," he continued. "We would go on little trips together. We went to, like, Mexico. We went to Italy. I'd say that the time we fell in love was our first trip to Italy, and so we ended up getting married there, and we go back there almost every year. … Italy is, like, our love spot."

The day before Legend opened up on Access Live, he and Teigen briefly talked about their first hang out on Celebrity Family Feud, but this time, Teigen was doing most of the talking. "We did the video, and then we had sex," she told the host, Steve Harvey. "I went to your [Legend’s] hotel and there was a …" But before she could finish, Legend cut her off, "This is a family show," and then finished her sentence by saying they, "got along very well" at the time.

After dating for five years, Legend proposed to Teigen in 2011 during a Christmas trip to the Maldives. The couple tied the knot in a courthouse in New York City during Fashion Week 2013 and then jetted off to their "love spot" for their actual wedding in Lake Como, Italy. Two years later, Legend and Teigen announced they were having their first child, Luna, who was born in April 2016. In November 2017, adorable little Luna told the world that her mommy and daddy had another "bibi" on the way. By the following May, Legend and Teigen's family became a family of four when baby Miles was born.

So, while these two didn't exactly fall in love right away, they were immediately attracted to each other, and that blossomed into one of the realest and most admirable couples in Hollywood. Here's to Legend and Teigen, I'll be forever rooting for you!