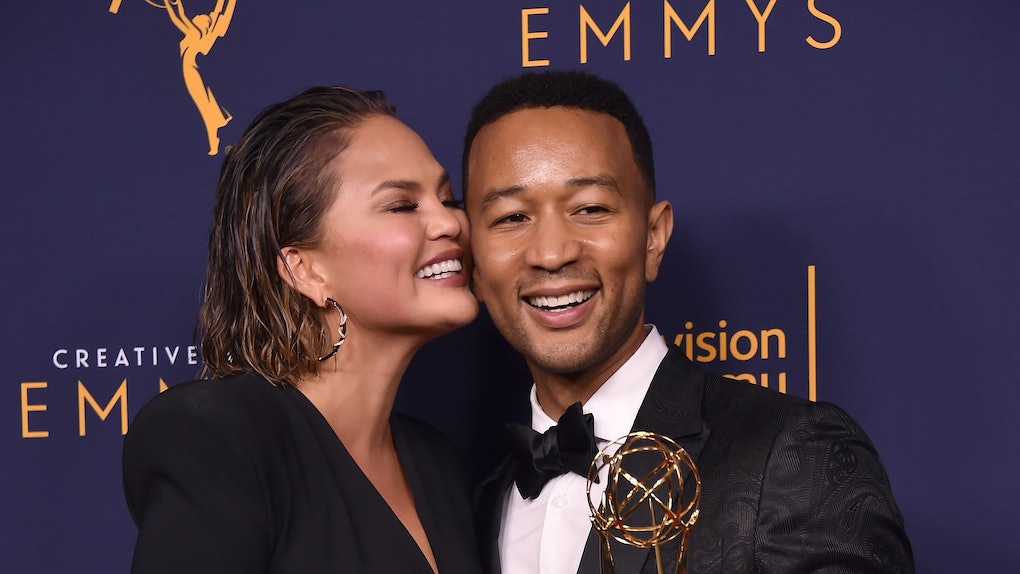 A lot of celebrity couples are easy to love, but Chrissy Teigen and John Legend take the cake. Their playful banter on Twitter, their too-adorable-to-handle pictures on Instagram, their constant encouragement of each other's careers — my heart is full of love for these two! And now, with their newest born baby boy Miles, their gorgeous family is growing. And so, it seems, is their love for one another. Chrissy Teigen and John Legend's body language after baby Miles shows that they have plenty of love for each other, and it's not going anywhere. Please excuse me while I swoon.

Now, before we jump into their adorably cute body language tells, here's a brief look at Teigen and Legend's relationship through the years. The couple met in 2007, when Teigen starred in Legend's "Stereo" music video. In 2014, she admitted to Cosmopolitan that they hooked up the night they met, but didn't start dating until a few months later because Legend was going on tour. They got engaged in December 2011 during a Christmas trip to the Maldives and tied the knot in September 2013, according to TIME. In October 2015, Legend and Teigen announced they were expecting their first child, Luna, who was born the following April. In November 2017, the couple announced they were expecting again. Their second child, a son named Miles, was born in May, which brings us back to Teigen and Legend's body language since baby number two arrived. Let's dive in.

1. They're both incredibly happy.

I'm sure Teigen and Legend have had their fair share of problems, like all couples have, but they do a d*mn good job of moving past their issues, considering they're often seen beyond happy together. At this app launch party in July 2018 (their first formal public appearance since baby), "He’s happy and excited, and he’s moving forward, and he’s got this nice, open smile with front teeth showing," body language expert Patti Wood tells Elite Daily. "The foot placement toward her says he’s including her in, but the excitement that he’s feeling is really that forward movement, [which] means the excitement goes even beyond his relationship with her. I think it’s maybe happiness about being a dad."

"They’ve got a slight love 'V' going on, and she has her clothing and possibly her chest and her shoulder are merging with him," she says. "I know what her standard smile is, and that’s an extra bright, open, full-teeth smile, with the cheeks quite lifted up. So, [there's] a great amount of happiness there."

2. Their physical connection is significant.

You know how when you're with someone you wholeheartedly want to be with, your face lights up, and everyone around you can see it? Well, Teigen and Legend emanated just that at the GQ Man of the Year Awards in London, earlier this month. Wood points out that their lifted smiles and the way they just pose together shows that their physical and emotional connection is incredibly strong. "What I really like here is how much of his upper torso is a significant weight-bearing lean-in toward her and a desire to emerge toward her. It’s emphasized with a tender kiss on the cheek, and I would like his head to be a little bit more toward her, but that whole body lean is significant," Wood elaborates.

"The fact that she’s got that lower foot, back, foundation foot that’s closest to him pointing toward him is significant. She has more of the central front of her body toward him, and the hidden merge at the back. I like how she’s just lit, and if you look at her face, all the musculature is lifted up. Anytime you have that upward posture, upward movement, upward pulling musculature, you have happiness and joy, and [hers is] all associated with him." Excuse me while I melt.

3. They match and mirror each other.

In the same way you can't stop yourself from having that ~glow~ when you're with your person, you also start to mirror someone you're especially connected to. You start to say the things they say. You start to do the things they do, and in Teigen and Legend's case, you start to pose like each other in pictures. Like here, at the Queer Eye Emmy's Cast Party in early September.

"He’s in his standard position with his back foot placement toward her, and if you look at her face again, full-tooth smile, lifted up. There’s more in this photo of matching and mirroring, where he’s showing full-tooth, a little bit of an open-mouth smile," Wood says. "This one has more of a cuddle. So, we’ve got some of the pelvis involved, as well as the full body merging all the way up from the pelvis to the shoulder, and then you have cheeks merging as well. What I also like is we can see her hand, and she’s got her hand on his belly. It’s intimate."

4. They consider themselves a unit.

If you needed any more proof that Teigen and Legend are #relationshipgoals, here it is, just last weekend. He's standing there, with his Emmy in hand, finally becoming an EGOT winner, and he doesn't even seem fazed by the trophy in his hand. He's completely focused on Teigen. "He’s making it about her, even though he’s holding this big award in his hand. I’ve read a lot of these photos where an actor or actress has an award in their hand, and it becomes more about themselves or the camera than their mate," Wood explains.

"This is a distinctly different photo in terms of the baseline for what I see in those kinds of moments because you have his feet pointed more toward her, the full lean, and merge, and the kiss. They’re seen together as a unit, as he wins this award, which symbolically says, 'You are a part of this. You and I got this together.'" How precious is that?!

It's clear from their body language since baby Miles' birth that Teigen and Legend are as happy and strong as ever. Here's hoping for an eternity of adorable family vacations, cooking classes, and Arthur jokes. These two are everything.