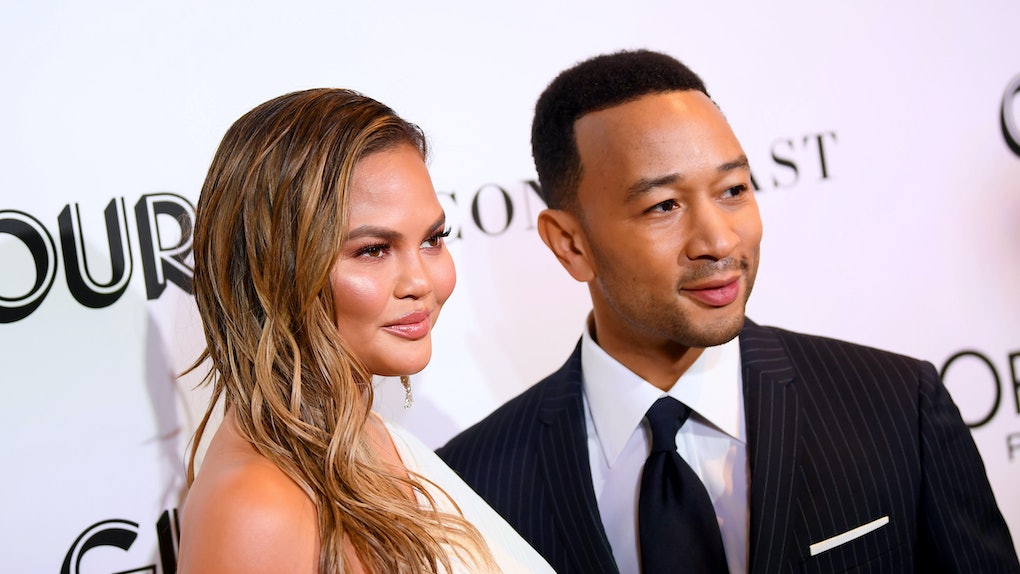 Listen up, everyone. Chrissy Teigen has something to say about what a cool family she has and she doesn’t want any of you nerds messing up her and John Legend’s new level of coolness. Teigen and Legend recently became what Teigen calls a “cool tattoo family” and that means exactly what you think it does. Yep, they got matching tattoos and they look pretty awesome. The photo of Chrissy Teigen and John Legend’s matching tattoos highlight their dedication to their family.

In an April 4 Instagram post, Teigen shared photos of her and Legend’s matching tattoos. Teigen now has a tattoo on her arm that says “John Luna Miles” in cursive. While Legend has a tattoo that reads “Chrissy Luna Miles” in cursive. Luna is, of course, the couple’s 3-year-old daughter. And Miles is their son, who’ll turn one in May. Teigen also got a heart tattoo on her forefinger.

In addition to sharing photos of their new tattoos, Teigen also set the record straight about how being a “tattoo family” has now upped their coolness factor.

“Hey guys please don’t talk to us unless u have tattoos we are a cool tattoo family now and we only want to talk to other tattoo families (srry if this seems harsh),” Teigen wrote in the caption of her post.

She also shouted out the tattoo artist that inked her and Legend, thanking them for their hard work by writing, “Thank you thank you @winterstone. You are not only incredibly talented but you are very kind and delightful and welcome over any time!!”

Yes, a cool tattoo family, indeed. And a dedicated one at that! Teigen has recently opened up about what it’s like to be a mom of two now and how her last pregnancy has prompted her to accept being heavier than she was before.

“Basically I am 20 lbs. heavier than I was before Miles. He’s 10 months old, I never lost the last bit because I just love food too much,” Teigen wrote on Twitter on Saturday, March 30. “Just coming to terms with my new normal, when I had this certain number for so long!”

Teigen also talked about how she was her smallest after her first pregnancy. Apparently, postpartum depression had a lot to do with it.

“The thinnest I've ever been was right after Luna. Postpartum depression. I'LL TAKE THESE POUNDS AND THIS FEELING!” she wrote.

By and large, it sounds like Teigen is in a great place right now, and more than happy to be a little heavier than usual. She’s a cookbook author, after all, and seemingly loves to try new foods. She actually tweeted recently about how she and Legend tried pretty much everything on the menu at a restaurant.

“Yesterday we went to Joy in Highland Park & ordered, I am serious, everything on the menu,” Teigen wrote. “Then we went to donut friend across the street and had apple fritters. then we went to somi somi for ice cream in k-town. then we went to Korean bbq. then I had a meatball sub at home.”

So, I guess good food is trumping literally everything (except family) right now. Good for them!