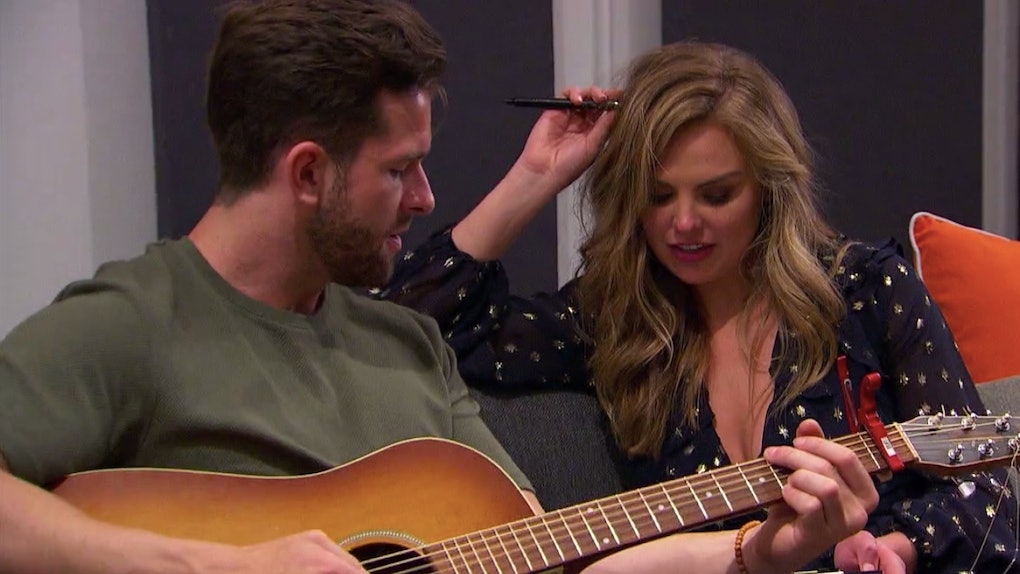 There are a few things fans of this season's Bachelorette know to be true: Hannah is looking for someone "real," Luke P. is not very popular, and Jed likes to display his musical talents. Because of that last one, it's no surprise that the aspiring country star incorporated his skills into his hometown date, this time by writing and performing an original number with Hannah. But even if you think Jed's musical outbursts are so played out, hold the eye rolls: Jed and Hannah’s song lyrics on The Bachelorette are actually really sweet.

Plus, cut Jed some slack. Every hometown date on the July 8 episode of The Bachelorette involved some kind of activity that was unique to each suitor: Peter flew Hannah in an airplane; Tyler C. took her out on a boat to show her his childhood home in Florida; Luke P. introduced her to his church group. It just makes sense that Jed would take Hannah to a recording studio to lay down some tracks.

When Jed told Hannah that they would be writing and recording a song together, he compared it to when he went out of his comfort zone to participate in the Mr. Right beauty pageant back in Week 2. Hannah initially seemed very nervous to try her hand at songwriting, but as they started coming up lyrics that described their favorite moments together, she loosened up and excitedly jotted down her ideas.

The lyrics they brainstormed together reference memories spanning from the time they first met (when Jed told her, "I can't wait to see if you shine on the inside") to their recent one-on-one walking along the cobblestone streets of Amsterdam. Take a look at the lyrics of the final product and see how many moments from Hannah and Jed's relationship stand out to you.

We feel it in our hearts

We are fallin' in love

And I can't get enough of your—

I don't want to leave

It's written in the stars

Jed seemed pretty pleased with the final result. "She was just a natural from the beginning," he said to the camera. "I'm not shocked; she's, like, really good at everything, so I love that about her."

The duo looked like they were having a blast while recording, and it appeared that singing the song with Hannah sparked something in Jed. After recording, they shared a kiss in the booth, and then Jed got very serious. "Do you ever just feel like your heart's coming out of your chest, because you have to say something and you just can't do it?" he asked Hannah, before telling her: "I love you. I can feel it."

Here's hoping their sound equipment was still recording to catch that sweet moment; it would be a great ending for their heartfelt song.