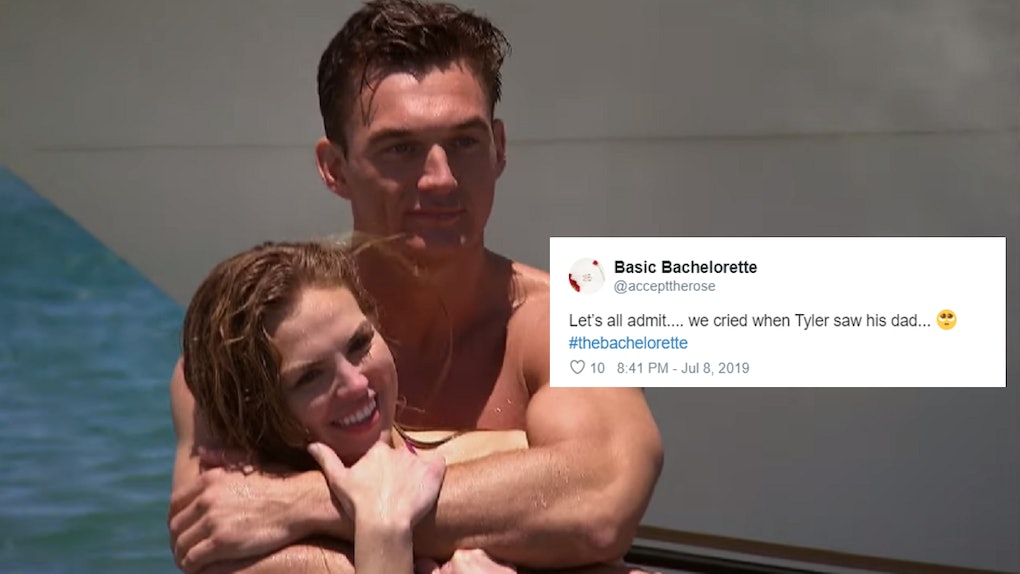 Hometown dates on The Bachelorette are usually a fascinating insight into why these final four men act the way they do, but most importantly, these visits are a solid glimpse into how compatible a leading lady is with the real life of one of her top guys. The hunky contractor Tyler has won a spot in many hearts of Bachelor Nation and he and his family definitely scooped up a significant chunk of Hannah's affection too. Tweets about Tyler's family on The Bachelorette will also destroy your heart if watching them hasn't already.

After horseback riding with Tyler through the Hague on July 1's episode, Hannah heavily encouraged him to open up about the insecurities he admitted to having. Tyler initially danced around the truth, but that night, he recalled seeing his parents get divorce and how the experience made him fear the failure of his future marriage. Owning up to past failures, Tyler told Hannah, "But I’m thankful for my fails, because I’m here with you today because of them."

After a shaky start, Tyler scored the rose guaranteeing a hometown visit, which delighted fans on Twitter. Bachelor Nation stans a respectful, charming contestant who is visibly eager about taking Hannah home to meet "Mama and the whole crew."

In July 8's Bachelorette episode, Hannah met Tyler in his hometown of Jupiter, Florida. He took her on a boat to explore the town from the perspective of the ocean, pointing out his childhood home as they lounged in the water together. Back in the Netherlands, Tyler shared that the family had to give up that waterside home his dad worked so hard for after the market crashed, so the moment was definitely heavy with sentiment. Tyler and Hannah canoodling in the ocean together also had fans on Twitter swooning.

Watching Tyler and Hannah's relationship develop has felt a little watching an adorable Hallmark movie all summer, and her experience with his family only perpetuated that feeling. While Hannah worried if Tyler was ready for a serious relationship, Tyler was concerned about seeing his recovering dad for the first time since leaving home. He's previously spoken about having to take responsibility when his dad was in the hospital, so the idea of seeing him again was also bound to be emotional.

Tyler's heartfelt reunion with his dad and their private time together also had viewers' hearts soaring as the older man told Tyler, "I look at you with her, like, 'Oh my gosh, he might be in love.'" Toss that in with Hannah's own sweet chat with Tyler's dad, and Bachelor Nation might just want a spinoff series starring both men ASAP.

Tyler topped off the day by hopping into Hannah's van with her for one last kissing session. Is anyone else surprised? Hannah couldn't give out roses until she went on all of her hometown dates, but if an entire family could score a rose, Tyler's crew was certainly in contention. Can Bachelor Nation come over for dinner sometime, guys?