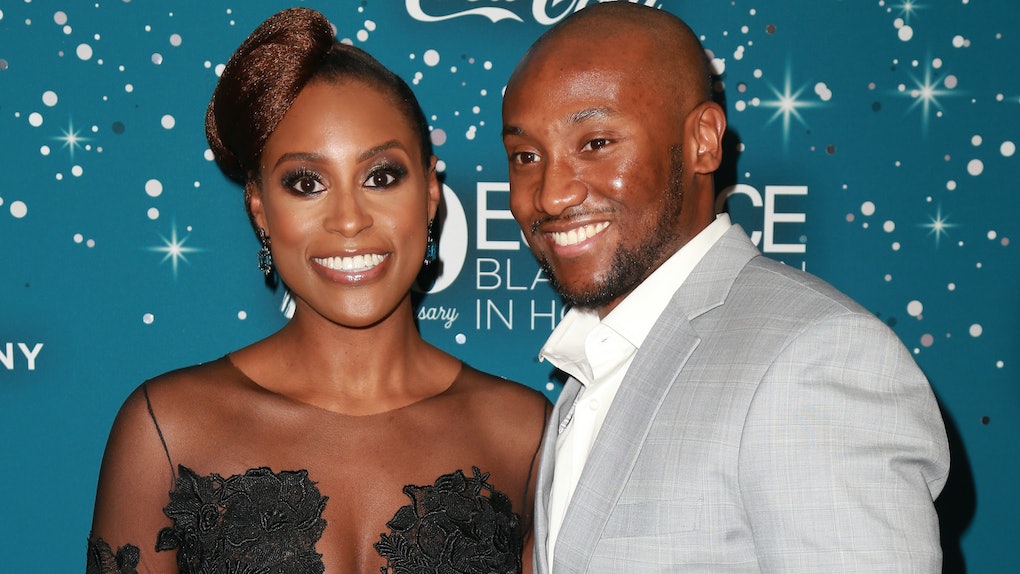 Issa Rae & Louis Diame Are Engaged & Ugh, I'm So Happy For Her

Happily ever after seems to be in the air in 2019 as one by one, some of Hollywood's baddest ladies get engaged. First, there was J. Law, followed by Katy Perry, who got engaged on Valentine’s Day (aww), and then J.Lo, who flashed her jaw-dropping rock mid-March. Now, Issa Rae and Louis Diame are engaged — at least according to her Insecure co-stars, who spilled the beans to Entertainment Tonight at the 50th annual NAACP Image Awards.

In a red carpet interview with ET on March 30, actor Jay Ellis revealed that all of her costars found out about the engagement in “different ways” because they talk at different times, and are on different text chains. Regardless, Yvonne Orji, who plays Rae’s on-screen bestie, says that the reaction to the announcement was pretty much surprise across the board.

“The reaction was all the same, like, 'You out here in these streets getting married, boo!?'” she told ET.

If you follow Rae’s social media accounts (or spotted a recent issue of Essence magazine), there’s a good chance you weren’t totally blindsided by this news. When Rae’s Essence cover was released, rumors that she was engaged to longtime boyfriend Louis Diame started spreading rapidly. In the photographs, the actress flaunts a stunning sparkler — and on her ring finger, no less. When Rae posted the photos from her shoot on Twitter, fans instantly noticed the rock (and TBH, how could you not?).

Fans had some questions (and understandably, were feeling some feels). Some may not have seen this coming, either, since Issa Rae has been known to keep her personal life under wraps.

"The one thing I don’t need feedback on is who I’m sleeping with,” she told Marie Claire in April 2018.

Back in 2017, she was linked to actor Kofi Siriboe, with whom she engaged in some good old-fashioned social media flirtation. However, in March of 2018, he announced that he was dating Australian model Duckie Thot (with whom he has since split).

Wait, so who is Louis Diame, then? As it turns out, she’s reportedly been dating him for about a decade. I know, I know — I’m shook, too. Apparently, she met the businessman, who is originally from Senegal in West Africa, before she ever became famous. Since then, he has been her date to at least a couple of red carpet events.

Rae still hasn’t officially confirmed the news herself — and when co-host Sunny Hostin called her out on The View today, stating that she noticed the ring, Rae played it pretty cool. “Oh, did you? I got a lot of rings on my fingers,” she said, giggling uncontrollably. I see you, Issa. [Insert smirk emoji.]

TBH, it's easy to be happy for Rae because there's so much to love about her. The self-proclaimed “Awkward Black Girl,” is not only an incredible talent and activist, but she’s also relatable AF. She has spoken out about inclusivity and diversity in Hollywood, and she’s also used her fame for philanthropic purposes as well. After the police shooting of Alton Sterling in Louisiana in 2016, she launched a scholarship fund for his children to attend college, which raised a whopping $700,000 in five days.

Back in July 2018, while serving as the face of CoverGirl, she collaborated with the iconic beauty brand on releasing 40 different shades for the TruBlend Matte Made Foundation, in an effort to make the formula more inclusive.

She not only created Insecure, which was just picked up for a fourth season, but she’s also a co-writer and star on the hit HBO show. FYI — that makes her the second black woman to create and star in her own comedy after Wanda Sykes (#BowDown). At the recent 50th annual NAACP Image Awards, the show received eight nominations, including Outstanding Actress in a Comedy Show for Rae, Outstanding Writing in a Comedy Series, and Outstanding Comedy Show. She's also received multiple Golden Globe and BET Award nominations for Insecure since it debuted in 2016.

Basically, Rae is a boss in every respect. In the red carpet interview with ET on Saturday evening, her co-star Orji said, “We're very excited for her.” You're not the only one, sis (and special thanks for spilling the tea.)

More like this
Is Katie Thurston Engaged After 'The Bachelorette'? Her Instagram Is Sus
By Joyann Jeffrey
Are Clare Crawley & Dale Moss Engaged Again? This Update Has Fans Convinced
By Candice Jalili
Meghan & Harry Reportedly Wished Will & Kate A Happy 10th Anniversary
By Candice Jalili
Stay up to date