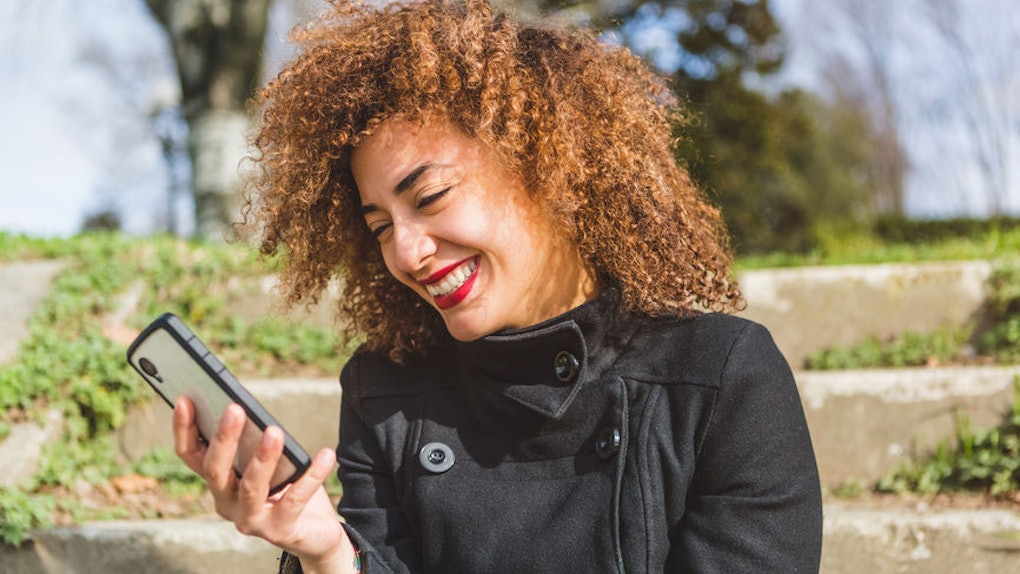 Is Seeming Too Eager When Texting Someone You Like A Real Thing? This Is What Experts Say

The beginning stages of a relationship can be super stressful. If they take two hours to reply to your message, do you take four? What do you wear on your first date? How do you know if you want the same things? It's often a lot to process in a short amount of time, and sometimes, your emotions can come across much stronger than you actually intend them to — whether it be in person, through text, or even on the phone. Unfortunately, seeming too eager when texting someone you like, especially at the beginning of a new relationship, is a very real thing.

Texting is tricky. It's "a very interesting art form. Where as you can [say] things in person to someone, it can come off as lighthearted, or easy-going, or playful, or fun. [But] sometimes when you text that same thing, with the same intention, it can be misread as, 'Wow, this person is way too into me for just having met me.' Or, 'this person is way too into this when we just met last night, or five minutes ago,'" John Keegan, dating coach and relationship expert, tells Elite Daily.

Now, that doesn't mean that any time you text someone new, you have to be super choosy with your words to ensure you're not seeming too eager. "You can text freely. Let the texts flow. Let the flirting flow. Let the honesty flow, from where you’re at in the relationship," Keegan says. That last part is very important. Based on what point you're at in the relationship, you can be eager and not have to worry about coming on too strong. But "if you’ve been dating for two weeks, and you feel like you’re going to be getting in a relationship, and you start planning your wedding, that’s going to scare the person," Keegan warns. "You can show enthusiasm and show that you’re excited about the relationship, but without super imposing large expectations on them."

It goes without saying that the longer you've been with someone, the less you should have to worry about seeming too eager. Once you've defined the relationship, you can stop being so conscious of how you're coming across to your partner, Keegan explains. But "when it’s undefined, you kind of have to allow it to happen, instead of saying, 'this is what I want, make it happen,' because it’s two people," he says. "You have to allow whatever’s between you [two] to unravel, and that’s the fun part and the painful part about falling in love. You don’t know. You’re stepping into the unknown the whole time. You get very, very vulnerable when you really like someone, so, you’re exposed. That’s the amazing part, where you feel alive, and it’s also the scary part."

If you notice yourself seeming too eager in your texts, and the other person starts pulling back a bit, don't fret. Your excitement didn't ruin anything. "The [best] thing to do would be to breathe, and give it space, and pull back a bit yourself. Take your foot off the gas pedal, and pull back, and let it settle, and let them come back in," Keegan advises. "The wrong thing to do would be then to really start texting them more, or asking them 'hey, what’s wrong?'"

You just have to trust that if it's meant to be, it will be, Keegan says. And remember: The reason for someone feeling like you're coming on too strong isn't your fault. "A lot of it’s about feeling stifled, or feeling like, 'oh, someone’s trying to own me or something,'" he says. Erika Ettin, dating coach, tells Elite Daily that "if someone is turned off that you’ve answered their texts too quickly, then that person is more into the chase than the possibilities," and we don't want that, do we?

But there's a fine line between pulling back and playing games, Keegan warns, so it's important to find that line. Let them have their space and come to you, but "you don’t want to get passive aggressive, like not responding to them because they didn’t respond to you in time, or making them feel weird because you felt weird," he says.

Our experts' last bit of advice? "Use common sense. Don’t text someone too many messages before they reply, and try not to obsess over time stamps," Ettin says. In the early stages of a relationship, finding the line between seeming too eager and being the right amount of excited is tricky. Take it day by day, text by text, and if you feel like they're pulling back a bit, it may be best to do the same. "You can’t be perfect, and things are going to get messy, and things can be sloppy, and allow it to be. It’s OK. It may or may not work but try to really enjoy the process," Keegan says.