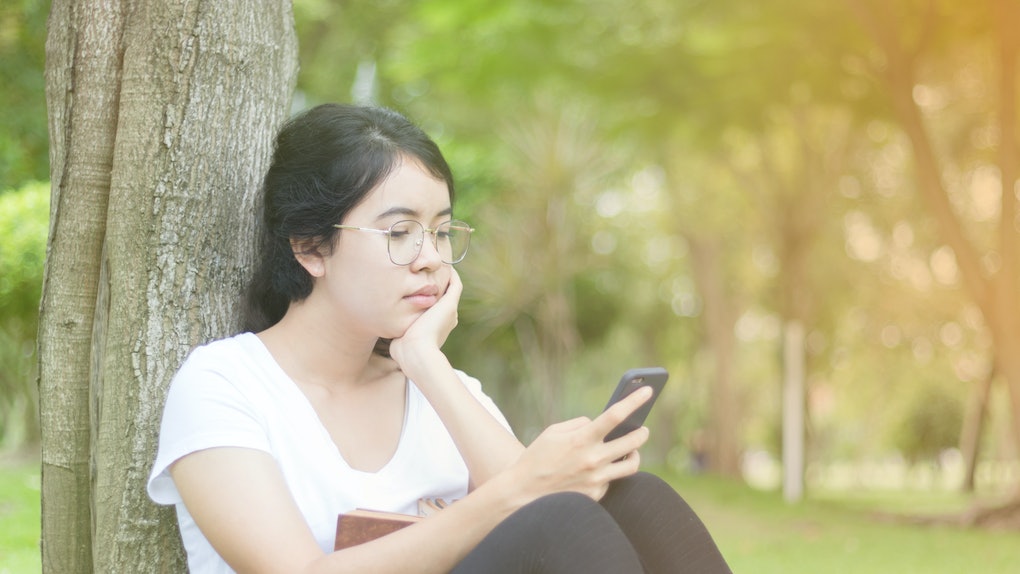 If You Don't Like Dating Apps, Here Are 5 Reasons That's OK

Full disclosure: I'm a firm supporter of dating apps. Yes, they can be overwhelming, and I encountered plenty of incompatible matches before I met my now-husband on Tinder, but I totally get that dating apps aren't for everyone. Many of my friends have given apps like Tinder and Bumble a try before deciding they weren't well-suited to the swipe life, and that's OK. If you don't like dating apps, you're certainly not alone, and there's probably a good reason why online dating just isn't for you.

"For better and for worse, dating apps have become the new normal for dating," licensed therapist Nicole Richardson previously explained to Elite Daily. "People no longer have to be vulnerable in person and approach strangers because they can use their phone to buffer a lot of the anxiety required to meet someone new." And while that may be a benefit for some, others may find that buffer way too impersonal or even detrimental to their self-esteem. As harmless as it seems to spend an hour swiping through matches before bed, dating apps may be taking more of a toll on your mental health or happiness than you realize. Here are a few signs that dating apps might not be for you.

You Think You're Wasting Your Time

Even if you tend to idly swipe through matches while you're watching TV or laying in bed, dating apps can be majorly time-consuming, especially if you're actually starting and maintaining conversations with those matches. Life is already busy enough without having to juggle 10 different conversations at once. When swiping starts to feel more like an obligation than something exciting, you're probably better off meeting people IRL than online.

As online dating expert Julie Spira previously explained to Elite Daily, "Committing to a chunk of time with someone you’ve never met can be daunting." And when you're committing time to several people you've never met, you might feel like you're wasting your time rather than using it effectively.

Pricilla Martinez, CEO of Regroop Online Life Coaching, agreed with Spira when she told Elite Daily, "...[Online] dating is an investment of time and energy into someone else. If you’re not seeing a return on that investment, move on." Spending time on dating apps is an investment, and if you feel like yours isn't paying off, then it may be time to quit the apps.

You're Easily Discouraged By Flaky Matches

With so many different conversations going on at once, it's pretty much inevitable that some of your matches are going to ghost you, either intentionally or unintentionally. Sometimes a great convo can end without warning when a match stops replying, and it's a major bummer. It's tempting to prioritize quantity over quality when it comes to dating app matches, but some people can't stand the idea of being seen as just one of many.

Martinez explained that a conversation that ends unexpectedly can feel like rejection rather than an oversight. "You may feel like you wasted your time, like they weren’t into you, or like they were just after an ego boost," she said. Dating app conversations can be revived, but that doesn't make a stalled convo any less frustrating.

Dr. Joshua Klapow, clinical psychologist and host of The Kurre and Klapow Show, summed up the dating apps experience perfectly when he told Elite Daily, "This is not an intimate, interpersonal process. It is about finding as many possibilities as possible with the hopes of finding, within the possibilities, someone they are interested in." If you're discouraged by the process, then it's unlikely that dating apps will ever make you feel satisfied or prioritized.

You'd Rather Make An IRL Connection

I don't have to tell you that making an online connection is far different than feeling chemistry in person. When you can't see a person's facial expressions or read their body language, it's more difficult to ascertain whether you two are actually hitting it off. What feels like a great convo online may not transfer to an in-person interaction, and knowing that might make your dating app convos feel a bit disingenuous.

As Spira pointed out, "Just because you have a fun and flirty banter in your messages on the app, it doesn’t guarantee you’ll have that offline chemistry." Chemistry is oftentimes something that can only be felt in person, and it's possible that you won't feel any connection at all when chatting online.

Klapow agreed, saying that, "Experiencing the person via their online profile ... is not really experiencing the person." If you're someone who prefers in-person chats over texting, it's likely that you will fair better meeting potential dates IRL than through a dating app.

You Feel A Negative Impact On Your Self-Esteem

Having matches flake out on you is frustrating, but what's even worse is the effect that rejection can have on your self-confidence. Sure, rejection is something you're just as likely to encounter in person as you are on dating apps. But being swiped left or having your message go unanswered can hurt much worse than someone just admitting they're not into you.

A study conducted in 2016 by the University of North Texas found that Tinder users seemed to have lower self-esteem and a more negative body image than people who didn't use the app. In a statement, one of the study's authors, Jessica Strübel, explained, "We found that being actively involved with Tinder, regardless of the user’s gender, was associated with body dissatisfaction, body shame, body monitoring, internalization of societal expectations of beauty, comparing oneself physically to others, and reliance on media for information on appearance and attractiveness."

Dating apps are not only a numbers game — they can oftentimes feel like a beauty contest, as well. You might even find yourself criticizing other users more harshly than you would in person, as well as looking at yourself with a more critical eye. A good dating experience should raise your self-esteem, not lower it, and it's possible that using Tinder and other apps is hurting you more than it's helping.

You're Bothered By The Stigma That Still Surrounds Dating Apps

Despite all the couples I know who have met on dating apps (including myself), it's undeniable that some people still feel weird about meeting dates online. It's not just the safety factor, either. Older folks are less likely to understand the appeal of dating apps, and it's hard to explain to parents and grandparents how you met your SO if you matched online. If you can't get past the concept and would really prefer a more organic meeting, you shouldn't force yourself to give the apps a try.

"Don't push yourself too hard," Richardson advised. "If [using dating apps] really doesn't feel good to you, don't do it." There will always be other ways to meet potential partners, and if you don't like the idea of having a dating app romance, then don't feel the need to engage in dating app culture.

Dating apps may be the new normal, but they are not your only option. Even if all of your friends are using Tinder, Bumble, or other apps, it's OK to be uncomfortable with the idea yourself. Go ahead and delete all your dating apps if that's what makes you feel good, because that should always be prioritized over finding the right match.