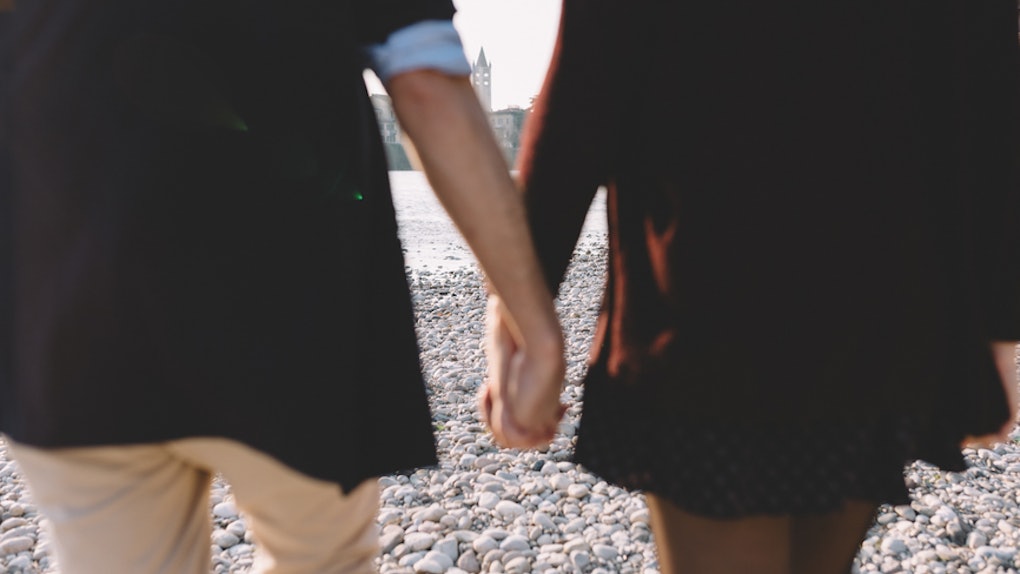 Why Meeting Someone On A Dating App Is Actually Incredibly Romantic

Hot take: dating apps are romantic. Give me your sailboat bros, your "entrepreneurs," your huddled creative directors yearning to send dick pics — I will happily accept them all. See, part of the romance of meeting someone on a dating app is that you've endured such hardships prior to finding them.

But before my saccharine musings and co-option of Emma Lazarus' poetry turn you off, let's break down some actual facts about dating apps. First, they're all we've got. Well, they're all we've got if we're too scared to approach someone in person (*raises hand*) and not trying to drop hundreds of dollars on a matchmaker (*raises hand*). It's not weird to meet someone on a dating app anymore.

Second, dating apps require more dedication than approaching someone at a bar after two (five) vodka-sodas. If someone who has never met you in the flesh is able to keep plans with you in the year 2018, don't discount the gesture.

Actually taking the time to utilize dating apps is the modern-day equivalent of climbing up a woman's braid to save her from a tower. Of course some people are just trying to get it in, but that's been happening since the dawn of time. Just ask cavewomen or literally anyone who slept with Don Draper types in the '60s. Dating apps didn't spawn casual sex.

Now, let me profess the ways in which I find meeting someone on a dating app to be incredibly romantic. Before you slide into my mentions, hear me out.

1. You Found The Needle In The Haystack

There are millions of people on tons of apps at multiple different moments in their lives. The fact that you went swiping anyway and just so happened to meet your special person is romantic. You had to sift through dozens or hundreds or even thousands of profiles to find the right one. Isn't that cool?

I'm a firm believer in the idea that we don't have one soulmate, but rather that we could fall in love with multiple people out there. But as anyone who's dipped a toe in the dating pool can tell you, finding just one person that makes you feel like the heart-eye emoji can be pretty challenging. (I would know: I'm on date 28 of 51 for a podcast and I've pretty much only had one true success story.)

2. You Have Your First Conversation Recorded Forever

Remember that time your partner had a pretty terrible opening line, and you didn't reply for weeks, but then, when you decided to force yourself to go on more dates and bantered back with them? Your terrible text etiquette is saved forever, unlike that bar conversation you both were a little too buzzed to remember.

3. Choosing To Delete Your Dating Apps Is Sweet

There is something to be said for the moment that your partner's dating app sends a push notification to their screen, you freak out, and you both decide to delete your apps so as not to cause World War Three. But in all seriousness, there's something very sweet and classically millennial about the moment you both agree to delete the apps.

4. You Get To Poke Fun At Yourselves On The Big Day

If you wind up marrying your dating app match, it's really adorable to incorporate your origin story as a theme in your wedding. I find it cute when couples make references to the app they met on in their hashtag or with their custom cocktail name or whatever.

If you and Tinder bae get married, make babies, and those babies make their own babies and somehow you stay together and neither of you dies (I'm a nihilist), just think how cool saying you met on an app will be! It will be a relic, and thus as hip as if you met listening to a record, or watching a VHS! By the time you'll be telling your grandbabies how you met, people will be meeting through some seriously hellish technology like that episode from last season's Black Mirror. Own it!