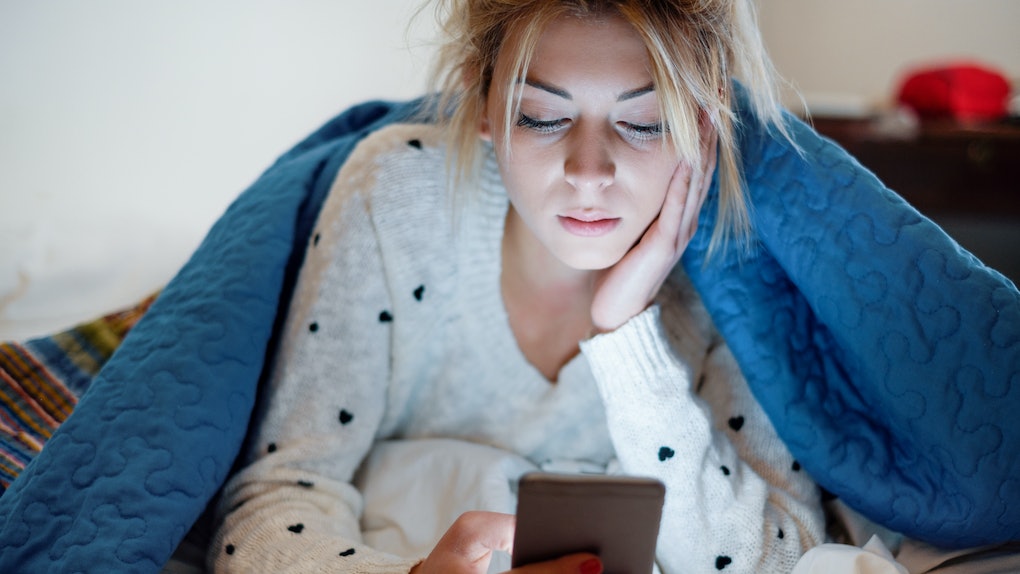 If You're Sick & Tired Of Dating, Here's How To Get Your Mojo Back

I've seen it happen to countless friends, and before meeting my husband, I came pretty close to experiencing it myself. After what feels like countless ho-hum first dates, dating may start to feel more like a second job than an enjoyable pastime. You don't want to exchange niceties over dinner with someone new every week anymore. Even swiping through a dating app feels taxing. Dating fatigue is real, and just like muscle fatigue, sometimes you need to give yourself a break from romance to avoid putting too much strain on your body. If you're sick and tired of dating, the best thing you can do for yourself sometimes is take a breather — at least for a little while.

As Jenna Birch, strategic advisor for Plum dating app, previously told Elite Daily, "It's not a test, or a race, to see how fast you can find a new flame. You can go on a dating hiatus, and just focus on yourself. Constantly scanning rooms and browsing apps for new dating prospects can make single life less fun." I turned to the people of the Reddit Dating Advice community, and they offered some helpful hints on what you can do when meeting new people begins losing its appeal.

Decide Whether Now Is A Good Time To Date

I was feeling [dating fatigue] before I met my BF. By the time I started talking to him (on Tinder) I had zero expectations. But I figured I wouldn’t mind making friends regardless, so that’s how I went into it. Thankfully he was in a similar mindset, so there wasn’t any pressure, and it just developed into what we have now. But I’ve always been the type to fall for friends, so I think I needed that friendship first before I could feel a 'spark.'

You can take a break from it. I went on a few dates in the fall after my first relationship ended. Decided I wasn’t ready to try dating again, focused on work and school until the following summer — that’s when I felt the energy to try again. Maybe just try to focus on having fun and making friends? It shouldn’t feel like a chore after all.

Limit The Time You Spend On Dating Apps

I get burned out and just delete any app from my phone. So while I'm out I'm not constantly checking notifications. Just have the account and sign in on my computer. I save it until the end of the day. Keeps it simple.

Spend Time With Friends Or On Yourself

Take a break. Spend time hanging with friends and going to the gym and doing what makes you happy for a few weeks. The apps will always be there. I'm going through some burnout right now. Not from lack of success, but because I need time for myself, and I've basically cleared my calendar next week.

Don't Invest Too Much In 1 Person

I originally started dating and I would date only one person at a time. I eventually felt like I would waste my time and invest all this time in one person only to be let down. I then started dating multiple people and found it to be just as annoying. People always fit in one of the three categories: (1) just trying to smash, (2) rushed into everything too fast, or (3) moved at a pace too slow for me. I eventually just stop dating and focused on myself and career. Things got better and I eventually found someone when I wasn’t trying. I would just try to do more things that make you happy because dating can get boring and dry easily when you seem to keep running into the same or similar people.

Try Not To Rush The Process

I had reinstalled Bumble, going through the motions while basically telling myself, 'This is so stupid.' I did go on two dates — but at the same time, when the day arrived I was hoping for a cancellation. Terrible, I know. But I went out with them, and while they were nice, I was honest with them when I turned them down for a second.

After every date, I checked in with myself. Was I sure I knew what I wanted? At the time I did, and still do, want a relationship... but I'm not at the point in my life where I can invest my time. So I'm stepping back, and doing what I need to do in the mean time.

Basically it's fine to feel that way. Just take that time to do the things you're wanting to do that won't be taken away by needing to go on a date, if that makes any sense. Sometimes we need a break and that's OK.

When I met my long term [partner], I had completely given up on dating seriously and had no intentions of anything serious with him, but here we are three years later.

Dating is exhausting and becomes over- or underwhelming. Keep dating, but lower your expectations for finding that spark with every date. Just have fun and when it clicks, you’ll feel it.

Pick up a new activity or do something that you've always wanted to do. Fatigue comes from dating, breaking up... the whole cycle. I've tried to do something that makes me like myself again. That will translate when you meet other people and you can bounce off that vibe.

Give Yourself A Fresh Start

It is freaking exhausting going out [on] countless first dates, or second and third dates, with people you only half-connect with. And when you use dating apps that provide a steady stream of matches, dating can really start to feel like a chore.

Whenever I start feeling like that, I break things off with all the women I’m currently dating, because if you’re with the right person, it won’t feel like that — which means that they’re all the wrong person. And I temporarily stop using all dating apps. Take some time to relax, reconnect with friends, save up some money, and just recharge your batteries. Use that time to work on yourself so that when you do feel like getting back out there, it’s an improved version of you and you’ll be more attractive to potential partners.

When you're feeling discouraged, swiping through dating can start to feel like a chore. But don't worry, that's totally natural. "Searching all those profiles and downloading all those apps, it can feel like an information overload sometimes," Birch pointed out. "You also can't plan love. If you're dating [to find] a relationship and haven't met someone you click with on that level in a while, you might grow tired of the search." Taking a break doesn't mean you're giving up on love — it just means you're prioritizing yourself for the moment. In fact, it's sometimes essential to make dating feel fresh again. So go ahead and enjoy single life for a bit — you'll be back when you're ready.