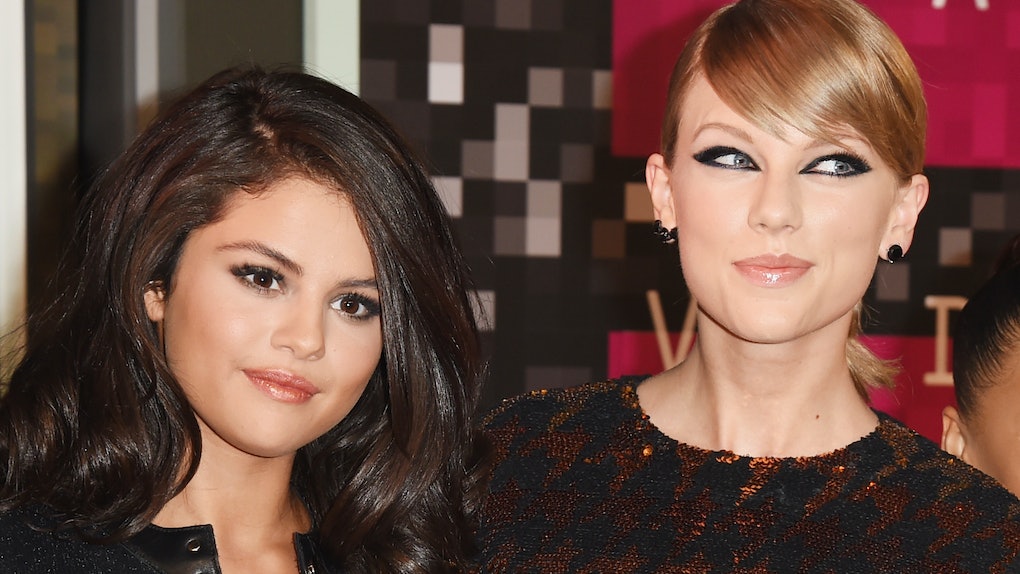 How Did Selena Gomez & Taylor Swift Meet? The Story Is Actually Hilarious

Not many celebrity friendships mean more to us than Taylor Swift and Selena Gomez's. In an uncertain world during uncertain times, I like to think about these two texting each other from their individual mansions while watching The Great British Baking Show, or Grey's Anatomy re-runs, or some other show that a stereotypical millennial girl might get into. You might have always wondered how Selena Gomez and Taylor Swift met, and my god, is it a great story.

Gomez recently stopped by Kiss FM UK where she revealed some hilarious details about how she and Swift first met. The host asked Gomez if she expected to do a collaborative performance with Swift while she was in town, to which Gomez responded with great enthusiasm. She said,

I mean, anytime... anyplace. She had been a fighter and a warrior and friend through all of this, for, we actually just talked about this a few days ago... it's been about twelve years of friendship.

I know, the specifics are confusing. If you're like me, you might think that Swift and Gomez actually don't age and are now (and always have been) 18 years old. If that were the case, and we're taking what Gomez said to be true, then they must have met at the ripe age of six. However, I did a quick Google search, and it looks like the two do get older, which makes them 27 and 25 years old, respectfully.

The radio host asked Gomez, "How did you guys [Gomez and Swift] first meet?"

It was hysterical. Yeah. It was amazing because she was the girl with the big curly hair and all the bracelets and cowboy boots, and, ya know I was definitely up and coming. And, we just clicked.

She joked, "It was the best thing we got out of those relationships [with the Jonas brothers]."

WOW, do I love the idea of tween Taylor and tween Selena hanging out with the tween Jonas Brothers.

Of course, since then, Swift and Gomez have graduated from The Jonas Brothers and have both gone on to embark on wild, romantic journeys. Swift has famously combed through men like John Mayer, Jake Gyllenhaal, Harry Styles, Calvin Harris, Tom Hiddleston, and most recently Joe Alwyn.

Gomez notoriously dated Justin Bieber for way too many years, took a brief break to be with The Weeknd, and is now back to Bieber. Through it all, Gomez and Swift's friendship has been the relationship that's lasted.

Swift might have summarized it best back in 2014 when she spoke with E! News. She said,

It's been the longest [friendship] I think either of us had really. When your life changes and you become thrust into this really strange whirlwind where what your life is different from what people think your life is. And your life is commented on and your life is written about and fictionalized and all that. Both of us have kind of stuck it out and hung in there through all the changes we've gone through.

She added, "Longevity is something you really can find very precious and rare in friendships."

Well, guys, it looks like I'm about to say something I never thought I'd say: seems like we can finally thank The Jonas Brothers for something.