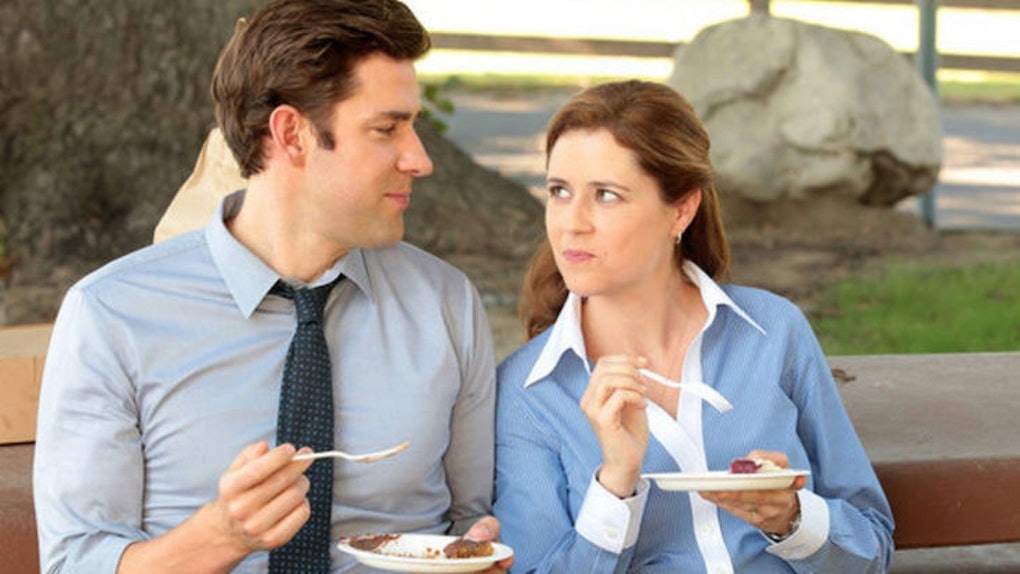 9 Dating App Opening Lines 'The Office' Fans Will Love, So You Can Find The Jim To Your Pam

If you're a Michael looking for a Holly, a Dwight looking for an Angela, or even an Erin seeking an Andy, knowing some dating app opening lines to send to The Office fans can be a great way to connect with some potential boos. Though dating apps weren't really a thing when The Office graced cable television in 2005, there's no reason the two can't collide. And if you're totally a Kelly or if Stanley makes your heart skip a beat, starting off a new conversation with an amazing Office reference can put you totally at ease when sending the first message.

Of course, no matter which Office character you identify with, sending a first message can be totally intimidating. Though it may feel easier to wait for your match to take the lead, messaging someone first can be a totally fun way to get the ball rolling. Whether you send a joke, a GIF, or a well thought-out niche reference that only super-fans would get , dropping a reference to this American classic is sure to land you a date.

Here are nine Office-inspired first messages to send on dating apps to help you find the Jim to your Pam.

1. "For you, I would plan a charity 5-kilometer fun run to raise money for a disease that has a already known cure."

The Michael Scott's Dunder Mifflin Scranton Meredith Palmer Memorial Celebrity Rabies Awareness Pro-Am Fun Run Race For The Cure is a classic reference that is sure to score you a date.

2. "You Going On A Date With Me | Everything Else"

True Office fans will recall all the list Jim makes stating "Pam, Cece, New Baby" on the one side and "Everything else" on the other. It's a niche reference and a sweet way to show someone you're interested.

3. "You may ask me out to dinner. Nothing fancy or foreign. No bars. No patios. No vegetables. And no seafood."

Say what you will about Jim and Pam, but my Office couple of choice is Dwight and Angela. Though she said this winning opening line to Andy, she ultimately ended up marrying Dwight on his beet farm.

Of course, if you're into bars, patios, veggies, and seafood, you may want to specify that quickly.

If you waited a day to send a message, make a joke about the time — like Michael did when describing his feelings for Carol (who, BTW, is played by Nancy Carell, Steve Carell's IRL wife).

5. "Sometimes I'll start a first message, and I don't even know where it's going. I just hope I find it along the way. Like an improv conversation. An improversation."

If you're not sure exactly what to say or even exactly what type of connection you're looking for with your new match, throw this classic Michael quote from a big meeting with David Wallace. It's a funny reference that opens up the conversation to literally any possibility.

6. I'm not sure what Creed's job is but I'm super sure that I want your number.

Even the biggest Office fans are lost in the sauce when it comes to knowing Creed's actual job description. Yet, when it comes to asking out a cutie, the ambiguity leads into a great opening line.

The hijinks between Jim and Dwight are an iconic part of The Office. Asking what kind of bear is best is a direct reference to Jim dressing up at Dwight, and can be a casual opening line.

It's a running joke that you never hear Bob's name without "Vance Refrigeration" after it. Though truth be told, his commitment to personal branding has got him far. Always taking Phyllis on lavish trips and buying her fancy presents (also just genuinely being in love with her) Bob Vance knows how to treat his date. And you can, too!

Michael Scott quoting himself quoting Wayne Gretzky is a quote that speaks for itself. In the nature of risk versus reward, use the quote to ask out that cutie!

Sending the first message on an app can be intimating, but making a real connection can be totally worth it. So, the next time you match with a cutie who loves The Office as much as you do, send them a cute line — you may find the Gil to your Oscar.