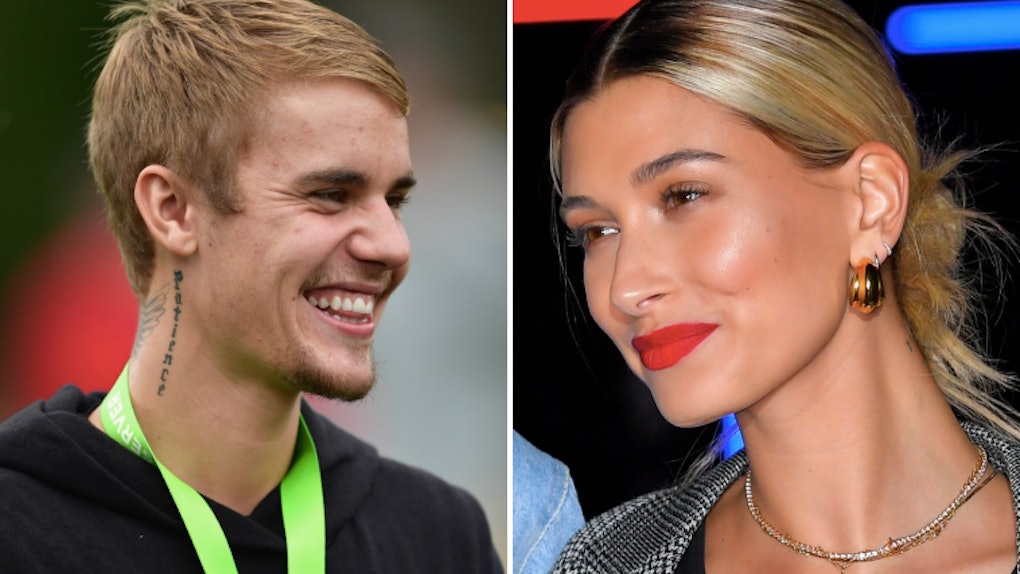 Justin Bieber and Hailey Baldwin love gushing about each other on social media. From the moment they started publicly dating again in June 2018, they’ve been practically inseparable, and they’re pretty much the star of one another’s Instagram feeds at this point. Despite the negativity they sometimes face from online trolls, Justin Bieber and Hailey Baldwin's cutest moments on Instagram show how happy they are together. Whenever there’s a milestone in their relationship, you can be sure it will show up on their social media feeds.

Bieber and Baldwin have supported each other through a lot, and it seems like their bond is only growing stronger with time. And while their public love-fest might be too much for some (Remember when Gwyneth Paltrow commented "TMI" on one of their flirty Instagram exchanges? Awk.), it also shows how proud they are to be together, through thick and thin. Honestly, if you’re looking for inspiration for how to flaunt your bae on Instagram, look no further than these two for creative ideas. They’re goofy, they’re sappy, and they’re totally in love, no matter what anyone else thinks.

This collection of Bieber and Baldwin’s sweetest moments will remind you that no matter how much life can get you down, love is a beautiful thing to celebrate.

The time he tricked her during a photoshoot.

Back in December 2015 (which seems like a million years ago, right?!), Bieber and Baldwin were hanging out a lot, but their romantic status was still unconfirmed. When Baldwin joined Bieber's family on vacation, Bieber posted this video of the pair looking awfully cozy. It was almost the confirmation fans needed that things were heating up.

The time this super hot pic confirmed their relationship.

One month later, in January 2016, Bieber basically ended speculation when he posted this sexy photo of them kissing. No caption necessary… mic drop.

The time they got engaged and broke the internet.

After that initial kissing photo that sent Jailey fans into a frenzy, things appeared to fizzle out pretty quickly. There was even one point when Bieber unfollowed Baldwin on Instagram while he was dating Sofia Richie. But then, after keeping a low profile while they rekindled their romance in June 2018, Bieber announced on Instagram in July 2018 that he put a ring on it… followed by another steamy makeout pic days later.

The time she left a flirty comment about him on a friend’s IG.

In August 2018, Baldwin slid into the comments of a mutual friend’s Instagram, leaving heart eyes and a flirty message for her man. Even when he’s living his casual day-to-day life, Baldwin can’t get enough of his hotness.

The time he shoved a birthday cake in her face.

One week after Bieber confirmed their marriage in an Instagram post, the pair was spotted celebrating Baldwin’s 22nd birthday in November 2018. Bieber, ever the jokester, presented his new wife with a cake… only to smash it in her face moments later.

The time he went off on the social media haters.

Unfortunately, Bieber and Baldwin have faced their share of criticism from Jelena fans who want to see Bieber get back together with his ex, Selena Gomez. In March 2019, Bieber decided he had had enough, and he responded to a hateful comment with a super long rant defending his marriage. “I am head over [heels] in love with my wife and she is absolutely the BEST THING that has ever happened to me period,” he wrote.

The time he was all over her in her Instagram live.

In March 2019, Baldwin hopped on Instagram live to update fans on her life, and she was joined by none other than her hubby, showering her with kisses. It was so much PDA that Baldwin seemed a little distracted from the story she was telling… but it was still cute AF.

The time he trolled her new modeling campaign.

After Baldwin shared photos from her super sexy new Adidas campaign, Bieber photoshopped himself into the image instead… and Baldwin wasn’t a fan. “Lolol I hate this,” she commented on her hubby’s post. Honestly, girl, I couldn’t agree more.

The time he left a NSFW comment about her.

When Kendall Jenner shared a photo of herself hanging out with Baldwin at a party, Bieber couldn’t help but take notice of his wife’s, er… assets. To be fair, she looks fire in this bustier, so I can’t blame him for being thirsty.

The time they revealed their nicknames for each other.

In April 2019, Baldwin shared a sweet photo reel of the couple laughing together, with the caption, “my only bubba.” In response, Bieber shared a photo series of Baldwin captioned, “This is my bean.” Fans are guessing these must be their favorite pet names for each other.

Ugh, the cuteness abounds. Whether you think they’re too sappy or perfectly sentimental, you can’t deny that the feelings between these two are super special. Long live Jailey, and long live their silly exchanges on social media! They both deserve all the happiness in the world.