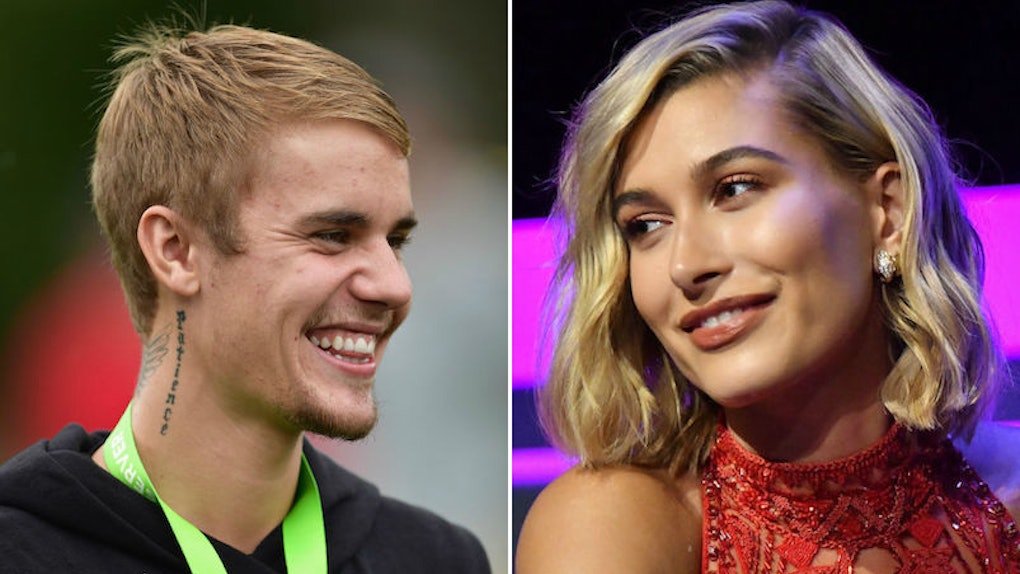 No matter what's going on in the lives of Mr. and Mrs. Bieber, they always manage to surprise us with a beyond-cute Instagram photo proving they're still going strong. And if Justin Bieber and Hailey Baldwin's recent body language on Instagram is any indication, it seems like things between the couple are moving in the right direction. Although the exact state of their marriage is frequently in question, as always, their activity on the 'gram paints a solid picture. And let's be honest: Whatever is going on between the newlyweds behind closed doors is their business.

However, one thing we do know is that Justin definitely got the pot stirring when his April Fools' Day pregnancy hoax led to some backlash. After posting a series of pictures to his Instagram leading fans to believe that Baldwin was pregnant, Bieber then posted a picture of an ultrasound with a puppy photoshopped into it. But, there were some who felt strongly that pregnancy is no laughing matter. Fortunately, Bieber was quick to apologize to anyone who was offended and it appears the scandal is blowing over rather quickly. When the two Biebs aren't busy being "pranksters," it looks like they do share some very cute moments. Here are a few of their recent Instagram pictures that certainly suggest things are well between the two.

"This is a cute kiss," body language expert Traci Brown tells Elite Daily. "But they’re not being super romantic. Notice that their hands and arms aren’t around each other. They are, however, doing the same thing and a couple on the same wavelength will match each other." Being on the same page as your partner is always a good thing, so it's great to see that they're still vibing.

2. Hailey's definitely still into her man.

Even though the couple presents a cohesive image, according to Brown, Baldwin may be a bit more affectionate than Bieber. "She’s way more into him here," explains Brown. "She’s draped all over him and he’s just got his hands folded."

3. Hailey leans on him for support.

Who doesn't want a supportive bae? Well, it looks like Baldwin also likes to lean on Justin in a more literal sense. "She sure likes to drape herself over him," notes Brown. "He’s her support and it's cute."

This photo and the above suggest that Bieber is Hailey's support system, and that she may look to him as a steady pillar of strength.

4. They're on the same page about their dynamic as a couple.

In the second image from this same post, (click the Instagram link to swipe right!) the couple can be seen about to kiss. "They’re matching each other’s emotions," says Brown. "Notice their smiles are at about the same intensity and that’s what good couples do."

Considering the emotional ups and downs Justin has dealt with recently, it's great to see that he and Baldwin are there for each other. Being married isn't always easy, but having a relationship in which both partners can support each other is always lovely to see. Although there's no guarantee about what the future holds for Bieber and Baldwin, their body language suggests they're making time for each other and continuing to enjoy one another's company. And, of course, that they're going strong and steady and that their love is the real deal. Consider me obsessed.

More like this
Justin Bieber's Quote About His First Year Of Marriage To Hailey Baldwin Is Unexpected
By Corinne Sullivan
Sofia Richie & Elliot Grainge Became Instagram Official With The Cutest Post
By Candice Jalili
Is Madison LeCroy Dating Whitney Sudler-Smith? Here's What Sources Say
By Candice Jalili
Stay up to date