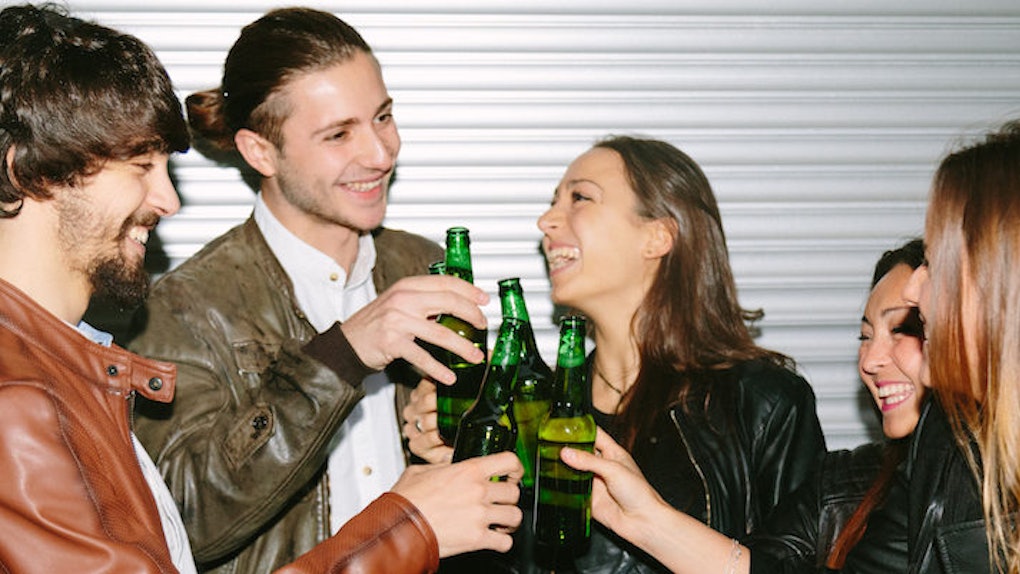 The Pros And Cons Of Going Out On Thanksgiving Eve

Often referred to by college kids across America as one of the greatest party nights of the year, this unofficial holiday signifies the return to your respective hometown in order to congregate with relatives for a large, typically very bloating Thanksgiving meal.

If you're like me, you take Thanksgiving Eve as an opportunity to drink so much, your brain isn't able to comprehend any questions your family may pester you with the next morning.

And while I'm not recommending inebriation for everyone who takes part in the night of debauchery, I can say having extremely awkward conversations with former high school frenemies while blackout is a damn good time.

As a veteran of this drunken occasion, I'm here to provide a guidebook of sorts, complete with scenarios outlining what could (and probably will) happen as you step foot into that grungy, often overcrowded bar you've spent many a Friday nights in.

Behold: my pros and cons of getting blackout on Thanksgiving Eve.

Pro: You have no problem bragging about how successful you've become.

You've returned home to find out that, although you barely made it out of high school math alive, you have now turned into the most accomplished individual out of all your friends and former classmates.

Go ahead and pat yourself on the back for this one. When you went off to college, the cool kids stayed home, did drugs and still lived in their parents' basements.

You may have taken off the suit from that five-figure corporate job you work at, but everyone is starting to realize you're the boss.

Con: Before you know it, you're paying for everyone's drinks.

Goddamn, why didn't you keep your mouth shut?

The second you whipped out that sleek black wallet, all eyes were locked on that wad of 20s sticking out. You know that saying "Money talks"? Well, money also buys out the bar, so guess what you'll be doing all night?

I hope your friends have Venmo.

Pro: You're probably the oldest person at the bar.

Gone are the days when you have to memorize the ridiculous information on your fake ID.

This hometown bar brings back memories of the good ole' days, and as you stroll in, it's hard not to tear up from the nostalgia (or the smell of stale beer).

There's nothing wrong in taking pride that you're a goddamn regular coming back home.

Con: Well.. you're probably the oldest person at the bar.

Congrats, you're officially an elderly person.

You can't help but watch as packs of underage tweens sweat their way through the bar's back door, excited to finally have their first taste of alcohol. Most of the kids there are simply incapable of growing facial hair, and if they have had sex, it was probably by (drunk) accident.

Their youth and liveliness makes you reconsider your life choices, and before you know it, you've called an Uber and are curled up in bed before 11 pm.

Pro: You get to flirt and flaunt yourself in front of your ex.

There's no telling who you may run into tonight, so it's best to doll yourself up as best you can.

Whether it means a tight dress or your most fitted button down, you want to dress to impress... well, someone.

The one hometown hotspot is bound to be populated with one of your exes, so it's your rightful duty to hook up with other people in front of them and show 'em what they're missing.

Con: You may blackout and go home with that ex.

More often than not, making your ex jealous can shift all the way from awkward eye contact to a heated argument, up to a low-key makeup session and then over to you moaning in their childhood bed.

The only thing I can tell you is when you finally awake from your drunken slumber, do your best to sneak out undetected. If that means climbing down a fire escape, by all means, go for it, Indiana Jones.

There's probably nothing worse than trying to sneak out the front door, only to have an awkward run-in with the entire family as they starting packing the minivan on the way to Grandma's.

Pro: You prove you're not too old to rip shots.

When you were in college, you used to sleep with a bottle of Burnetts next to your bed.

Beer and shot combinations were your favorite thing on any menu, and you disregarded any rule when it came to alcohol consumption, as long as it involved a lot of it.

While it may have been be awhile since you've gone shot-for-shot, you have no issue drinking all your friends under the table.

Con: You spend the next day eating Thanksgiving dinner hungover and alone.

Did I say more? I meant floor.

You vaguely remember opening your eyes on the bathroom floor in the middle of the night with the taste of vomit sitting in the back of your throat.

It's only when you wake up on your parents' couch that you realize not only is it 2:30 in the afternoon, but you've also completely missed Thanksgiving dinner.

Clearly, your family gave no fucks about leaving your hungover ass behind, and you'll be resorting to a nice meal of congealed turkey and over-salted mashed potatoes when they return.

Pro: You get to relive your favorite teenage traditions.

It's important to keep up with traditions with old friends, and Thanksgiving Eve always cashes in as one of my personal favorites.

Each year, my goon squad of friends rely on my quick wit to somehow sneak an overly large and festive Christmas decoration out of the bar by any means necessary.

I never reveal my plan of attack, what I'll take or at what cost... until the night's conclusion, when we're so smashed, we completely forget about the original plan in the first place.

Con: Those traditions end up getting you arrested.

That wit you heavily relied on has diminished from all those years of binge-drinking and bong hits.

Though you fully comprehend stealing is wrong, you feel the pressure to prove you're still the same kid who smuggled a large singing Santa Claus under your North Face and out of the bar's perimeter with no issue whatsoever. (Yes, I was just that good.)

Unfortunately, this year's master plan to rip an entire line of Christmas lights off the bar wall is not only questionable, but also could cause such a ruckus, you may end up spending your holiday behind bars.

And if you have terrible friends, don't say I didn't warn you!