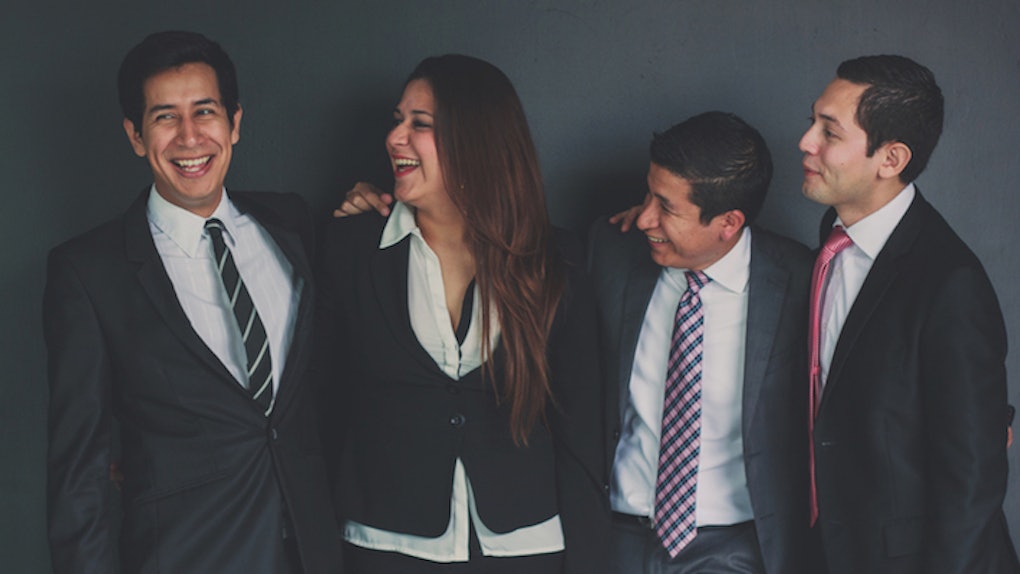 One of the main obstacles for Millennials in the workplace is our inability to connect with the prior generation. I should know; I am literally the only Millennial in my office, and referred to as "Our Millennial" on conference calls.

My days are endless discussions about childcare, medical inquiries, retirement investments and '80s references. I don't know how many times I've been a part of a conversation bashing Millennials, followed by, "But you're not like other Millennials. You're an anomaly."

Somehow, I've been able to navigate this treacherous (and slightly condescending) battlefield with some key tactics and a willingness to adapt.

Plus, I've learned that alcohol is an elixir with which everyone enjoys, but I'll get into that later.

One of the first things I realized when I started my job was that the older generation yearns for the respect and admiration of Millennials.

It doesn't matter that you might be more educated, more experienced and super cool, show a little humility, and they gravitate to you.

I have never been more impressed with someone's accomplishments than I am at work.

A conversation between my boss and I one day went like this: "My first job was at this obscure retail store that no longer exists where I made $3 an hour." "Wow, how did you live? But that's still so cool," was what I said, but in my head, I was really thinking "That's funny. I might default on my loans because you're paying me less than the equivalent of that."

But, simply getting in on the conversation is half the battle. If you want to establish your position as a viable, social option in the office, you have to conform to their ways. I've shared more stories about what's happening with my body, my relationship and childcare (which I have zero knowledge on) than I care to think about.

I was impregnated with a massive food baby at a bottomless brunch on Sunday, but they don't care about that. They just want to talk about the orchestra concert last Friday night. "Yes, your son sure is a terror on that cello."

I've also learned that members of Gen-X are either reluctant or incapable of learning new things related to technology. I wasn't born with a computer, tablet and smartphone at my fingertips, but I sure as hell figured them out over the past 20-something years.

Getting mad about it in the office, though, is pointless.

As soon as you start pointing out your knowledge of social media, the latest apps to make your life easier or the pros and cons of the latest iPhone release, you have instantly become just another Millennial. Thus, you've lost any chance at connecting with your older co-workers.

One thing I've been able to find a common interest in, that no one can seem to say "no" to? After-work drinks.

If you're having trouble relating to the people in your office, suggest after-work drinks. This is a 100 percent, sure-fire way to connect with your older counterparts. It's also a great way to get free drinks.

Don't judge me. They've got an entire decade of income over me.

After-work drinks have been an absolute revelation. Who knew the 40-year-old mother of two across the office stays up until midnight binge-watching "Stranger Things" on Netflix?

Who knew the guy who wears a tie to work (even though we don't have to) tried more drugs in college than I knew existed and still gets high on weekends? I wouldn't know either of those little tidbits without after-work drinks.

If you take nothing else away from this little spiel, always remember, after work drinks equal free alcohol and bonding moments that will live forever.

There's also a whole deal about working hard to earn respect, but that's neither here nor there.