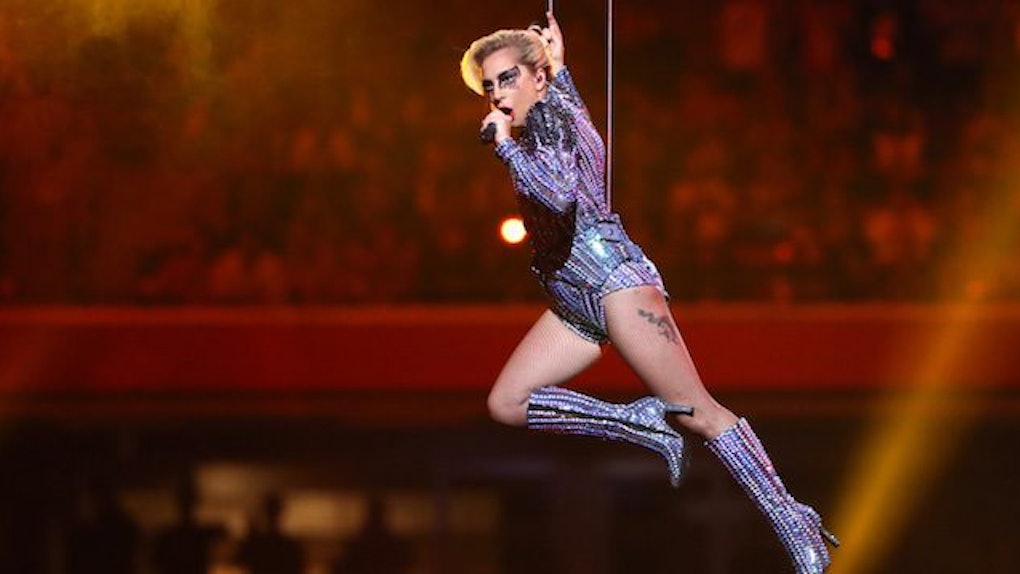 These 8 Celebrities Are Teaching Women To Love Their Bodies

Growing up as a woman in today's society can really suck sometimes, especially when it comes to body image.

These days, in the world of Photoshop and Victoria's Secret models, it's hard to look at your own body and feel like it measures up.

It's really easy to spiral into self-hate and or turn to harmful eating habits, and to feel like there's something wrong with you.

Trust me; I've been there.

But there's a beacon of hope in the madness.

Despite the "I woke up like this" celebs who refuse to admit maintaining their figures takes a ton of work, there are others who always keep it real when it comes to loving their bodies... flaws and all.

These confident badasses know they're beautiful, even if haters say otherwise.

Lady Gaga absolutely KILLED it at her Super Bowl performance last weekend, but that didn't stop haters from shutting her down because she displayed a slight "stomach."

They kept talking about her "gut" and how she should've "worked out harder" if she knew she was going to be performing on national television.

Obviously, these claims are RIDICULOUS: She looked amazing. We all have a little flab... it's called being human.

I'm proud of my body, and you should be proud of yours too.

Chrissy Teigen's gorgeous, successful and has the cutest little baby ever. (Seriously: Have you SEEN baby Luna?)

But despite the fact that she's totally beautiful, Chrissy's been known to always keep it real. From complaining about her junk food cravings to being open about her fertility issues, she doesn't ever attempt to come across as unattainably perfect... and that's why we love her.

Chrissy's also known to keep it real about how she feels about her body, especially after she noticed her body changing once she gave birth. She posted an Instagram post showing her stretch marks, and even Snapchatted another one a few months ago.

She explained to Meredith Vieira,

I have those apps, the Facetune and Photoshopping ones, and I just didn't feel like doing it anymore. And I'm never doing it again because I think we forgot what normal people look like now.

Khloe Kardashian works HARD for her body, and she isn't ever afraid to admit what a struggle it is.

But she also stresses the importance of being strong and empowered by her body. Her book is called "Strong Looks Better Naked," and she's always posting videos of her workouts so people know she isn't messing around when it comes to her health.

I have moments of weakness, but mostly I brush the criticism off. Who cares if I'm not a size zero? I don't want to be. I love my body; I'm healthy, I work out.

From posing in lingerie – without Photoshop! – to being unafraid to shoot her body in unflattering angles on both "Girls" and on Instagram, Lena Dunham's never been shy about admitting her insecurities.

She has shut down her body shamers countless times, saying things like,

I really feel good with my size now. I know when I say that people are like, 'mm hmm', but I just do! It used to be when I went into a room with all thin women I felt like, what's wrong with me? Now I just feel special.

Serena Williams is a force to be reckoned with both on and off the tennis court.

But despite winning 23 Grand Slams and absolutely killing it professionally, haters haven't stopped criticizing her muscular physique over the years, calling her too "manly."

But as she eloquently told SELF magazine,

I love my body, and I would never change anything about it… I'm not asking you to like my body. I'm just asking you to let me be me. Because I'm going to influence a girl who does look like me, and I want her to feel good about herself.

Young women these days are under so much pressure to look a certain way, and it just isn't attainable for everybody to look the same.

Having someone like Serena sticking up for the way she looks really helps to keep things in perspective.

Mindy Kaling's been breaking barriers for years, from being one of the only female writers on "The Office" to being the first Indian-American woman to star in her own show.

Another way she's been breaking barriers? By being comfortable in her size, no matter what.

She writes in her book "Why Not Me?",

Her honesty is so refreshing because it reminds us all there are far more important things to worry about than our bodies.

Our worlds are so much fuller than that.

Demi Lovato has always been very open about her body insecurities. She's talked about her eating disorders in the past, as well as her struggles with body image.

She's been on every end of the spectrum, and used to self-medicate with prescription drugs. After rehab, she finally got to a place where she was comfortable with her body, and is a strong pioneer of self-love.

She said in a powerful interview,

We all have problem areas. I'm always going to have thick thighs. I can't change that, and obsessing over it will only make me miserable. Learning to be grateful for our bodies and taking care of them are the best ways for us to empower ourselves physically, mentally and spiritually.

She keeps it real about the parts of her body that don't fit Hollywood's "ideal" body standards, and remembers there's so much to be grateful for, despite that.

Ashley Graham's always been unashamed to flaunt her curves, and she's even created a swimwear line for plus-size women, so they can embrace their bodies.

She always shuts down haters and has no qualms about letting people know her "flaws" only make her more beautiful.

She recently posted a close-up shot of herself in a bikini on Instagram, saying,

I'm not ashamed of a few lumps, bumps or cellulite... and you shouldn't be either.

Ashley is always quick to remind us that as long as we're treating our bodies the best we can, we shouldn't care about any tiny "imperfections."

It might seem hard to love your body when you're surrounded by flawless figures. But as these celebs show, your body is yours alone, and you can't compare it to anyone else's.