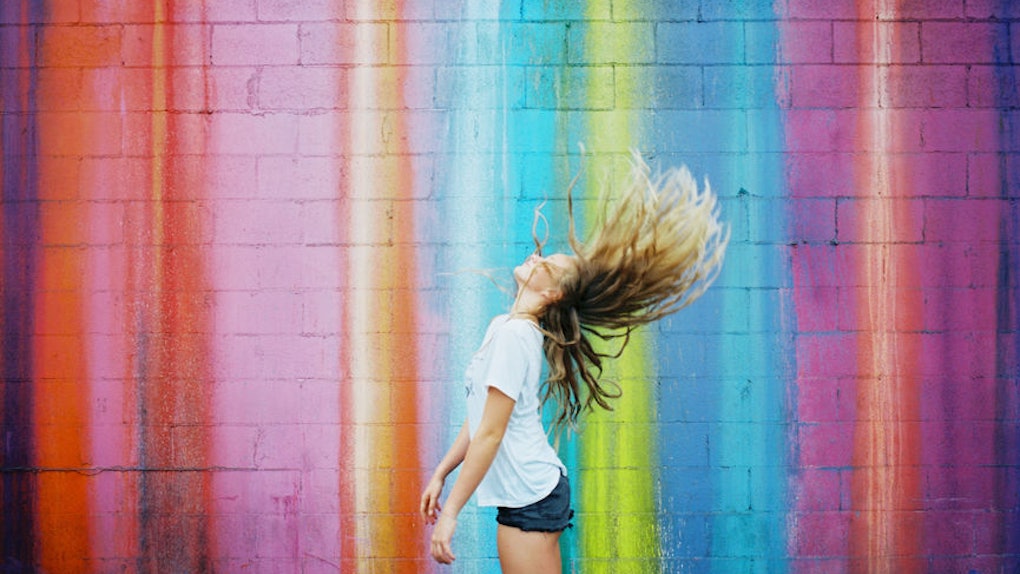 Your August 6, 2018 Weekly Horoscope Is Beyond Dramatic, So Take A Deep Breath

I don't know about you, but I'm totally and utterly exhausted — and I blame the cosmos for it. I mean, Mercury retrograde is bad enough. Causing everything to glitch and malfunction, spinning drama and confusion everywhere, this planetary tailspin is way more than the bags under my eyes need. However, Mercury Rx is in many ways, the least of our problems. We're in the midst of a galvanizing and transformative season of eclipses and it's throwing us all for a loop. Although lunar and solar eclipses are ultimately a good thing, bringing you closer to your ultimate destiny, they have the power to shatter the ground beneath you first. If you're ready for your world to finally take shape once again, then you need your Aug. 6, 2018, weekly horoscope stat.

Because six planetary retrogrades wasn't enough, we now have Uranus joining our troop of insubordinate planets through its own retrograde starting Aug. 7. Luckily, this planet is in retrograde around 40 percent of the time, so it's nothing you're not used to. Can we all collectively breathe a sigh of relief here? However, you'll still feel its erratic and impulsive effects making it much harder for you to hold back. Combined with Mercury and Mars retrograde, this week is bound to have you walking on thin ice.

Speaking of Mars, its retrograde is causing the planet to move so far backwards that it's now reversing from Aquarius to Capricorn on Aug. 12. This is bound to make some of you feel insecure about your success in the world, pushing you to overwork yourself or do unreasonable things for the sake of ambition. Hang on tight, my astro warriors. The growing pains will soon be worth it.

To top it all off, a partial solar eclipse in Leo on Aug. 11 is causing all this chaotic energy to culminate in one of the most climactic moments in our astrological journey through the summer so far. However, this next chapter of your life will be about self-love and confidence building. If you're delving into uncomfortable introspection, keep your destination in mind.

Yes, I know. This is a lot to take in. I'm sure you're feeling dizzy just reading all this. However, I don't want you to walk away thinking that there will be no cosmic luck in the air this week. As Venus makes a graceful move into Libra — the zodiac sign that she rules over — romance, friendship, and love will cast rose petals across our world, helping you get through it all.

Mars, your ruling planet, is now spewing its retrograde confusion throughout your 10th house of career, slowing down your upward climb and cooling off the fire of your motivation. However, you shouldn't let society's unrealistic idea of success deplete your self-love. You're worth far more than the approval of others. Right now, you're meant to delve into creativity and fun, especially with the solar eclipse electrifying your fifth house of pleasure and art. Instead of stressing over the future, focus on the now. Despite everything, isn't it beautiful?

Uranus is in your first house of the self as it engages in its tumultuous retrograde, which means that your currently undergoing major changes in not just your life, but you're entire identity. This is the period of time in which you might randomly decide to get bangs, color your hair purple, or announce to your family that you're quitting your job to travel the world. As exhausting as this period may be, it's also incredibly exciting. And when the solar eclipse energizes your fourth house of home, you'll reinvent your home base, making you feel comfortable, even in the eye of the storm.

I know, I know. Mercury, your ruling planet, is still bulldozing your world through its retrograde. Just a few more weeks and everything will settle into place once again. For now, be extra careful about what you say and how you say it. With Mercury Rx in your third house of communication, it's best to leave off difficult conversations for later and put that mouth of yours under supervision. If you're still burning to speak up, trust that you're reacquainting yourself with your most authentic voice through the solar eclipse in the same house. You're about to speak with so much more confidence soon.

Ah, the moon, your ruling planet, is acting up once again. Eclipsing the light from the sun, you know that this astrological event is bound to send your hairs standing on end. In your second house of finance, you'll likely experience revelations about your financial desires. Perhaps it'll be the motivation you need to start making more money. Maybe it'll just make you feel like spending tons of it. Whatever your instincts are, make sure that you're looking beyond the money and focusing on what it means for your self-confidence. Money comes and goes. Self-esteem remains.

I don't have to tell you that solar eclipses are a ridiculously intense time for you. With the sun as your ruling planet, the upcoming partial solar eclipse in Leo is bound to galvanize your identity and sense of self. A whirlwind of change is headed your way. Are you feeling constricted by the expectations of others? Are you yearning to break free and enter an exciting new phase of life? Well, now's the time, Leo. Embrace the person you're becoming and don't even think twice about what others think about it. You're morphing into the person you're meant to become. Don't stop.

You're stressed out enough as it is, Virgo, which is why I'm sorry to report that you'r probably experiencing even more stress than usual because Mercury, your ruling planet, is in retrograde. Perplexing your 12th house of spirituality, this retrograde is likely causing turmoil within, possibly even causing you to hurt your own feelings by focusing on hypothetical scenarios or believing that things are worse than they really are. Talking to someone you trust about your feelings or at least writing in your journal is essential. You need to know that many of your fears are not rational.

Do you suddenly feel happier than usual? Are there butterflies swirling in your stomach? Even though you're undeniably going through stressful times, Venus, your ruling planet, has danced its way into Libra and it's calming you with charisma and romancing you with love. You're radiating warmth, Libra. Don't forget that. When the partial solar eclipse skyrockets through your 11th house of community, you'll handle the initial whirlwind of change in your social life with ease, as your energy is ridiculously lovely to be around right now.

Your ruling planet, Mars, is still dizzying your world through a retrograde. However, the retrograde is now zoning in on your third house of communication, complicating your ability to speak up during dark times and get your point across. This, coupled with Mercury Rx — which naturally complicates communication — is a difficult cosmic cocktail. However, you're learning how to use your voice in a new way, so be patient with your words. As the partial solar eclipse sparks change in your 10th house of career, you're becoming a solid player in the outside world. You're gonna be making waves of success real fast.

You like to think of yourself as different from the others because you don't fear change; you embrace it. In many, many ways, this is true. However, just because the partial solar eclipse is affecting you in your ninth house of adventure (your ruling house) doesn't mean that you won't be forced to grapple with strange new realities. You may receive insight and wisdom that challenges the way you approach life. Perhaps this next adventure is far less thrilling than you'd like it to be. Maybe in this next chapter of life, the adventure lies within. However, this journey has a beautiful destination, so trust in it.

As Mars slips backwards into Capricorn during its retrograde, you can bet you'll be experiencing its turmoil on a whole new level now. However, you must remember that retrogrades move backwards because there are still lessons to be learned that our planets may have skipped over. In this case, you could be humbled by several opportunities for growth. As the universes tests you through various hurdles, you're being put through the wringer so that you come out stronger on the other side. This is about harnessing your power, Capricorn. Never forget that.

You thought you were in the clear after that total lunar eclipse in Aquarius a couple of weeks ago, but you were wrong. As of this week, Uranus, your ruling planet, will enter retrograde and affect you on a more personal level. You'll feel the initial earthquakes of complicated instincts and overwhelming chaos in your home life, as it affects the section of your chart having to do with home and family. However, the changes will soon taper off, and you'll get used to the unsteady ground. Trust that you're building up to something solid and grounding in your world.

With the partial solar eclipse in your sixth house of health, organization, and productivity, you're being challenged in areas of your life that are normally difficult for you. You're a dreamy, otherworldly intuitive. However, this sometimes leads you to being scatterbrained and confused by real-life responsibilities. Even though this next phase of your life may be stressful, forcing you to learn how to become a more reliable and accountable adult, you'll appreciate the growth in the long run. Messiness and forgetfulness only holds you back.