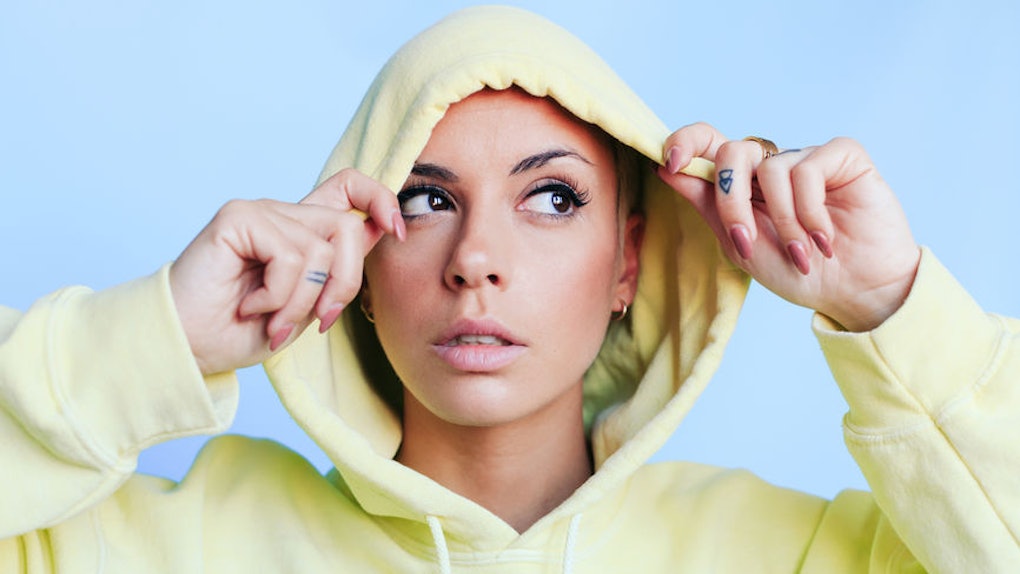 What's The 1 Thing You Wish You'd Said During A Breakup? 7 People Reveal Their Biggest Regret

Regret is a cruel, coldhearted b*tch, and breakups tend to be chock full of it. You might regret the things you said to your ex in a fit of distress or downright rage. You might regret how long you let the relationship play out when you were clearly unhappy, or the effort you didn’t make to salvage things. But here's a question — what's the one thing you wish you'd said during a breakup? Whether a heartfelt comment about your time together, a question that might help give you clarity, or a self-affirming assertive statement, that thing you didn’t utter can haunt you long after the relationship has come to an end.

It's super common to have these regrets, too, because breakups can throw you through an emotional loop. If you’re the one who’s being broken up with, you might be in such a state of shock that you become speechless. And if you’re the one breaking it off with your partner, their emotional reaction may surprise you so much that you’re at a loss for words as well.

There’s obviously no perfect thing to tell your partner during a breakup, but still, sharing certain thoughts or feelings can help you to achieve a sense of closure. From the poignant to the slightly petty, here’s what a handful of people wish they said during their split.

I wish I actually told him how I felt about us and told him the real reason why I wanted to break up, rather than just saying that I wanted to be alone. I was trying to not hurt his feelings, which was dumb because I still hurt his feelings AND I lied … it was a really selfish thing to do and I’ve definitely learned from it. An ex deserves honesty, not just when it’s convenient for you.

"Can I date your best friend after this?"

Straight From The Heart

She broke up with me over the phone… I asked if they wanted to talk about it in person. They said I could do that but it probably wouldn't have helped. And I asked if they wanted to try and fix things and they said they didn't want to. So as blindsided and mind jumbled as I was, I gave up and said, "Okay. I'll miss your cats. Goodbye." and promptly hung up the phone.

That's it. This was almost three weeks ago and we've been no contact since. Saying I'll miss their cats isn't a lie, I just wish I had the ability to say much more than that. It's dumb because I'm a hopeless romantic. I would have liked to say "I'll miss you, I cherish all the good times we've had and you made a lasting impression on my heart." Or something like that. But I'm really bad (in) the heat of the moment … My brain needs time to process information and feelings and sometimes it takes me a good day to figure out how to translate that into words that make sense.

I wish I had said, “thank you.” I was in too much shock and too angry to be grateful. But now, I am. Grateful for all the time we spent together, and grateful that he cut me loose so that I can maybe find someone who truly wants to be with me.

I faked it. Every. Single. Time.

Our break up literally happened in 10 minutes. Nearly three years all over in that short of a span of time? I felt so blindsided and so in shock, I had NO clue what to even say. I’m not the groveling type either, I wasn’t about to go on and on about how much I love him and want to make it work. I asked if we could discuss it and he just kept giving me short, brief, vague answers. I want us to have more of a discussion and also a proper goodbye.

When my ex dumped me, he came over to my house after an 'I need to talk to you' text, and the first words he said when we sat down on the sofa were 'I don't want to be in a relationship anymore.' It was so f*cking brutal and unexpected and cold that I broke down immediately and couldn't think straight. I managed to ask how long he'd felt that way, but when he said it had been months — and stated a date before his first 'I love you' — I retreated so far into myself that I barely remember anything else about it. I should have asked what the f*ck happened. But I said nothing...

Had I known we'd never talk again, I would have said more … I had no warning and no explanation. I was so confused. I still am. I still wonder about it. And it hurts me deeply to know that not only did my ex not want to be with me anymore, but he didn't care about me enough to make sure I was okay after he left. He didn't care enough to want me to think positively of him. He just wanted me gone as quickly and cleanly as possible. And like the good girlfriend I was, I gave him that.

Who can relate? Breakups are one of the most traumatic and torturous human experiences we all share — and perhaps one of the worst aspects is agonizing over what you could've, should've, or would've said. But when you start to feel those pangs of regret, remember this: There is no perfect utterance that can wrap your relationship up in a neat little bow, or change someone's mind, or make you feel at peace.

Rather than beating yourself up over what you didn't say, take comfort in the simple fact that so many others feel the very same form of regret, too. You can't change the past, but you can learn from it — so with that, go forth and speak your truth, fam.