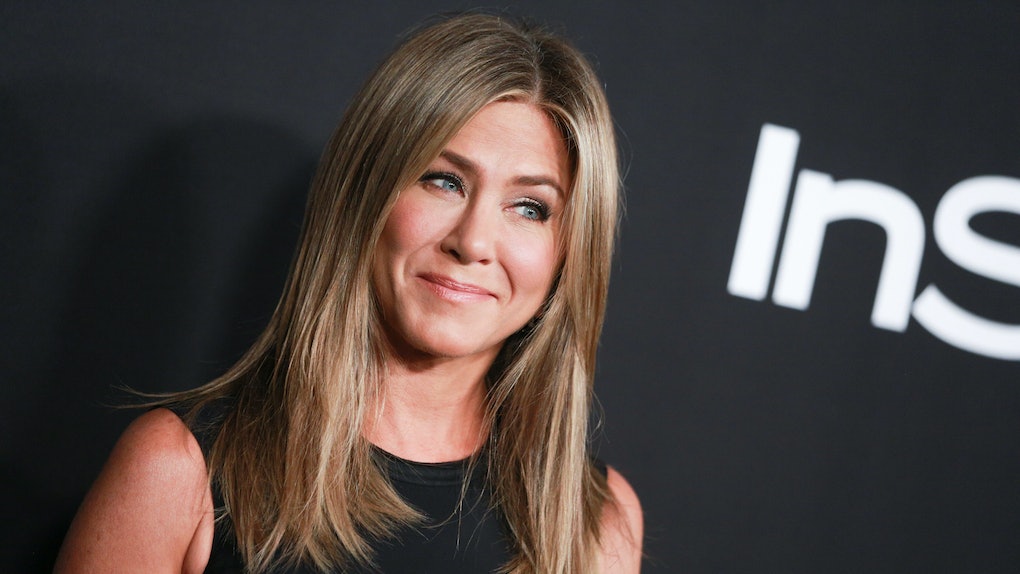 There are two kinds of people in regards to romance — the ones who believe they have one true soulmate, and the ones who ROTFL at the ridiculous nature of that notion. Blame it on Disney movies or Nicholas Sparks novels, but we’ve basically been programmed to believe that soulmates exist. And as such, many of us eagerly wait to cross paths with someone under poetic circumstances and “just know” it's destiny. Not Jennifer Aniston. In a recent interview, she revealed that she doesn’t subscribe to this concept – instead, she believes in "soul clusters.” So, what's a soul cluster? Color me #intrigued.

In the May 6 Harper's Bazaar interview, which was led by her pal, comedian and First Ladies costar Tig Notaro, Aniston explained:

I’ve had some of my friends for 35 years. I think we’ve all made some sort of unconscious agreement. It’s like when certain groups of people meet, they form a little soul cluster — a sort of common group of souls who have been put together.

If this notion sounds eerily familiar, you may recall that Charlotte proposed it in a Season 4 episode of Sex and the City called “The Agony and the 'Ex'-tacy.” After Carrie laments not having a man in her life following a disappointing birthday celebration, Charlotte (in her endearingly saccharine fashion) says, “Maybe we can be each other’s soulmates. And then we can let men be just these great, nice guys to have fun with.”

Aniston and Miss York are not the only people to adhere to this idea, either. Aletheia Luna and Mateo Sol, spiritual mentors and co-founders of the company Lonerwolf, just have a different term for it: A “soul group.” In a blog post, they define your soul group as “a group of people that your soul energetically resonates with on a mental, emotional, physical, and spiritual level at any given moment.” This goes beyond sharing the same tastes, hobbies, and opinions — it involves a deeply felt yet inexplicable connection. According to the Sol duo, it doesn’t have to be a romantic connection, either, which totally lines up with Aniston’s explanation of her longtime friend group. The Lonerwolf cofounders explain that every person in your soul group will enter your life to teach you a lesson, and you’ll likely need to rely on intuition to know you’ve found them. They assert that there are signs that can suggest you’ve come across someone in your soul group. For example, you’re magnetically drawn to them, you mirror each other’s thoughts and words, you feel a strange sense of familiarity and comfortability (as if you’ve known each other for eternity), time moves quickly when talking to them, and you feel energized around them.

Matchmaker and CEO of Exclusive Matchmaking Susan Trombetti is a proponent of this alternative as well.

"The idea of one soulmate for us is something I don’t believe in," Trombetti tells Elite Daily. "I think they are many people in this world that we could fall in love with. On some cosmic level, I believe there are many people we connect with — we find people at times in our lives when we are more vulnerable and open and that group becomes the soul cluster. Those are bonds that carry you through life and cannot be severed."

Still, many hopeless romantics seem to be hung up on this idea of "The One" and only one. According to a 2011 poll by Marist College, a whopping 73% of Americans insist that they are destined to find their true soulmate. Interestingly, that percentage is slightly higher for men (74%) than it is for women (71%). Less surprisingly, it’s also higher among younger people — 79% percent of participants under the age of 45 were on board with the idea of soulmates, compared with 69% over the age of 45. Meanwhile, a 2011 Rutgers University survey of American 20-to-29-year-olds found that 88% believe in soulmates, and a staggering 87% are optimistic that they’ll find that person when the time is right.

But here’s the thing. From a probability point of view, the outlook on finding your one and only is pretty grim. In his book What If?: Serious Scientific Answers to Absurd Hypothetical Questions, engineer and scientific theorist Randall Munroe crunches the numbers and reveals that the chances of finding your soulmate are depressingly slim — in fact, you’ll only find true love in one lifetime out of 10,000. Woof.

Indeed, the idea of soul clusters feels a tad more realistic as well as reassuring — and not just from a mathematical perspective. Studies have shown that when you believe you’re simply meant to “click” with someone perfectly, and everything will fall into place, you’re more likely to give up when challenges arise because you’re less inclined to work at your relationship.

Relationship researchers and professor Dr. Jason Whiting previously told Elite Daily, “One problem with the ‘soulmate’ ideal is it can make normal relationship bumps feel like anxiety-inducing red flags. A couple might have a disagreement that results in hurt feelings, but someone looking for an idealized relationship then thinks they have ended up with the wrong person."

According to the Merriam-Webster dictionary, the definition of soulmate is “a person who is perfectly suited to another in temperament; a person who strongly resembles another in attitudes or beliefs.” It’s important to note that in no way does that definition specify that there is one individual for all of us. So, maybe Aniston is onto something. And she would know from experience, too. The actress has been married and divorced multiple times, and has miraculously managed to maintain positive relationships with both men. Case in point: Brad Pitt popped by her 50th birthday celebration this past February, and Justin Theroux posted a heartwarming Instagram gushing about his former wife in honor of her birthday (#ExGoals). Clearly, Aniston has witnessed firsthand how it’s entirely possible to have multiple soulmates.

Humans are complex individuals, and different people can inspire, fulfill, and complement different dimensions to our personalities in a myriad of ways. Not to mention, we change with age, and we do not necessarily evolve on the exact same trajectory as our partners. And if soulmates are supposed to be extensions of ourselves that we learn from and grow with, wouldn’t a cluster of three or four be better than one? Now that’s romantic.