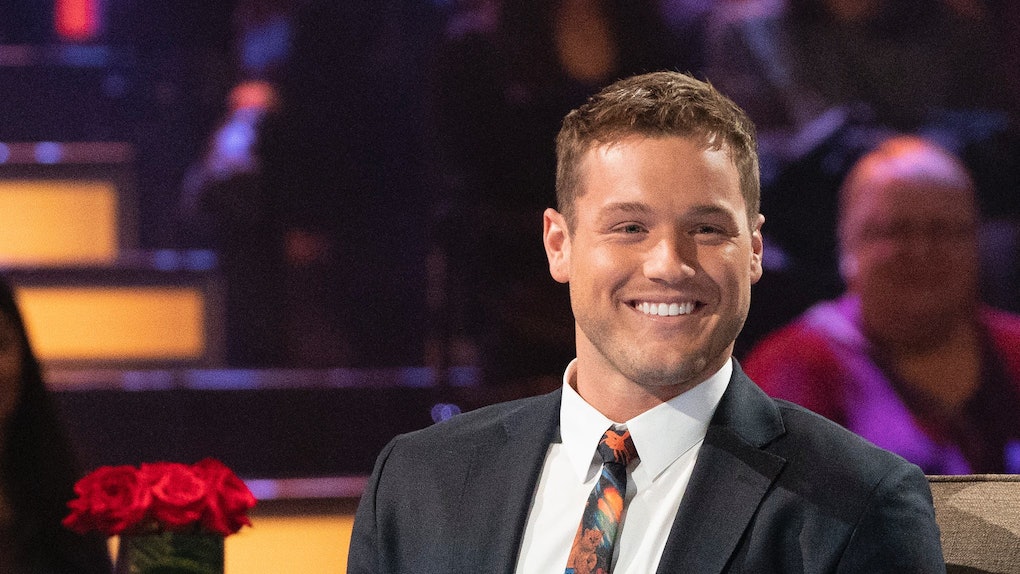 On April 14, former Bachelor Colton Underwood told the world he's gay in an emotional interview with Good Morning America anchor Robin Roberts. It was a major step forward following his involvement in a reality dating franchise that's showcased heteronormative romance for decades, and one that could (hopefully) have a lasting impact. Since he came out, Twitter has exploded with opinions on whether this is a catalyst for Underwood — or someone else in the LGBTQ+ community — to finally be a franchise lead. But this left me wondering: What would an LGBTQ+ Bachelor season even look like? The odds aren't exactly in favor of this happening, but let's unpack the implications of it in the event it does.

Underwood was previously the lead of The Bachelor Season 23 after appearing as a contestant on seasons of The Bachelorette and Bachelor in Paradise. He was branded as the "virgin Bachelor" during his time on the show, fueling fan speculation that he was gay. Fast-forward to 2021, he's now openly gay, with a high-profile interview announcing his sexuality and a rumored Netflix reality show about this new phase of his life. Despite his recent problematic behavior (more on that later), most of Bachelor Nation has been supportive. In a joint statement released on April 14, executive producers wrote: "We are so inspired by Colton Underwood's courage to embrace and pursue his authentic self. As firm believers of love, we celebrate Colton's journey in the LGBTQIA+ community every step of the way."

Naturally, this all has led fans to revisit a longstanding question about the franchise: Will this finally bring about the first-ever LGBTQ+ Bachelor or Bachelorette season? There has been a major push for the series to be more inclusive of people from marginalized communities in recent years, so to some fans, an LGBTQ+ lead is a logical next step. As of right now, it's too soon to tell if this'll happen. But the way I see it, if the franchise were to go down that road, it would take a lot of work to get it right.

Bachelor Nation has rarely deviated from its rigid formula: A conventionally attractive, straight (and typically white and Christian) lead searches for love among several contestants of the opposite sex, placing the goal of a heteronormative marriage as the ultimate happy ending. The format certainly appeals to the conservative portion of the franchise's audience.

It's no secret The Bachelor caters to this demographic. For example, in 2014, when former Bachelor Juan Pablo Galavis was called out for saying there shouldn't be a gay Bachelor, longtime host Chris Harrison somewhat defended this position, turning it into a question of whether showing LGBTQ+ romance would be good for ratings. "Is our job to break barriers, or is it a business? That's not for me to answer," he told The New York Times Magazine.

But while this conservative segment of the Bachelor audience is very real, it definitely doesn't represent The Bachelor's entire viewership. In 2020, several fans founded the Bachelor Diversity Campaign, which urges the franchise to take concrete steps toward improving its treatment and support of BIPOC people. And many of the top Bachelor podcasts — such as Claire + Emma (formerly HuffPost's Here to Make Friends), Date Card Pod, Chatty Broads, and 2 Black Girls, 1 Rose — regularly unpack how thorny societal expectations about gender, sexuality, and race are embedded in the framing of each Bachelor season.

Bringing in an LGBTQ+ lead would be a huge step in terms of representation, but is the franchise able to do an LGBTQ+ season without botching it? Consider the franchise's (very limited) history with LGBTQ+ representation so far: In earlier (but still recent) seasons, same-sex relationships were considered a punchline. Let's not forget that promo for Kaitlyn Bristowe's 2015 Bachelorette season that dubbed two male contestants' platonic friendship "Brokeback Bachelor."

Since then, two bisexual stories have been featured, both on the summery ensemble spinoff, Bachelor in Paradise. There was Jaimi King, who appeared on BIP Season 4 and was largely tokenized for her sexuality. Then, the franchise's first-ever LGBTQ+ romance unfolded in 2019, when former Bachelor contestant Demi Burnett invited her girlfriend Kristian Haggerty to join her in Paradise.

Compared to King's treatment, Burnett's journey in navigating her first public LGBTQ+ relationship and coming out in her 20s was handled in a much more respectful, nuanced way. But there were still so few depictions of LGBTQ+ love within the franchise that Burnett had to invite an outsider into the franchise rather than find someone on the show. Her and Haggerty's relationship was merely allowed to exist alongside several other traditionally straight Bachelor couples.

The Bachelor franchise's treatment of other marginalized groups in the past is another bleak indicator of what an LGBTQ+ season might look like. Although The Bachelor has been around since 2002, the franchise didn't cast its first Black lead until Rachel Lindsay became Bachelorette in 2017. And it wasn't until this year that the franchise aired its first season with a Black male lead, Matt James.

Even as The Bachelor executives have very slowly made progress toward racial representation, they've done a poor job ensuring contestants and leads of color feel protected and advocated for. Lindsay has critiqued the show for portraying her as "an angry Black female," and in March of this year said she wouldn't renew her Bachelor contract due to the show's mishandling of diversity and racism.

That same type of mishandling notoriously made James' Bachelor season tumultuous. What was meant to be a groundbreaking season was overshadowed by controversy surrounding his frontrunner Rachael Kirkconnell's past racist actions, with many viewers arguing Matt James' trauma was being exploited through it all. Not only could I see an LGBTQ+ contestant getting a similar treatment, but also, based on (*gestures widely*) pretty much everything we know about the franchise up to this point, leads and contestants who are members of both LGBTQ+ and BIPOC communities could be doubly harmed if producers aren't truly committed to telling their stories responsibly.

Bachelor Nation — which positions heterosexual marriage and families as the pinnacle of romantic success — would need a serious structural overhaul if it wanted to make an LGBTQ+ season happen. Unfortunately, I could see producers just squeezing an LGBTQ+ narrative into its traditionally heteronormative foundation rather than acknowledging the unique realities of navigating those relationships in a heteronormative society.

While many LGBTQ+ people also desire a marriage and a family, throwing an LGBTQ+ lead into The Bachelor's rigid framework with no deeper thinking could perpetuate the idea that LGBTQ+ people should show themselves to be "just like straight people" in order to enjoy the same privileges. Instead, LGBTQ+ people's love stories often look markedly different because these relationships exist outside the heteronormative fantasy society has taught us to desire.

Even if these structural changes actually happen, casting the right person to be the first-ever LGBTQ+ lead is just as crucial. Underwood may seem like an obvious choice given his star power and experience within the franchise, but he's also problematic: In September 2020, Randolph had a temporary restraining order granted against him for alleged harassment and stalking. (Elite Daily previously reached out to reps for both Randolph and Underwood about the reported restraining order but didn't hear back in time for publication.) Yes, Underwood apologized to Randolph directly during his Good Morning America segment in April 2021 and implied his behavior was compounded by his struggles with his sexuality, but that doesn't mean he should suddenly be granted another primetime TV role. (We can both hold empathy for his journey and demand accountability for his alleged abusive actions.)

Another potential candidate is Burnett, whose relationship with Haggerty ended after their Bachelor In Paradise engagement. When Lindsay asked Burnett if it was time to have an LGBTQ+ Bachelor during a recent Extra interview, Burnett joked, "Yes, it's time! Make me the Bachelorette." (It's worth noting Burnett's track record isn't totally clean, either. In February 2021, she was called out for wearing a Yeezy jacket with a confederate flag on it, which she issued an apology for.)

Better yet, what if the franchise decided to cast a newcomer who has openly been a member of the LGBTQ+ community for a while and is looking for a long-term partner? Of course, this casting would inevitably force the first LGBTQ+ lead to bear the pressure of representing a diverse community of people in a world where white, cis LGBTQ+ people make up the bulk of media representation. For years, GLAAD's annual "Where We Are On TV" report has indicated that less than half of LGBTQ+ characters on primetime cable series were people of color, a trend that improved somewhat in 2020, when 52% of these LGBTQ+ characters were people of color. Bottom line: Whoever would be cast in this fictional scenario, production would need to commit to supporting this person through their journey in a meaningful way.

One possible concern with having an LGBTQ+ Bachelor or Bachelorette season would be if the contestants fell for each other instead of the lead. But, hello? That would make for damn good reality drama, not to mention serve as a more accurate reflection of the messiness of modern dating compared to The Bachelor's antiquated "one man dates 30 women" courtships.

Plenty of other reality dating shows have already succeeded in telling distinctly LGBTQ+ stories. The latest cast of MTV's Are You the One? was entirely comprised of "sexually fluid" singles, with no gender limitations on potential couples. The Netflix series Dating Around featured LGBTQ+ contestants as they searched for a romantic match on five blind dates. While finding a partner is still prioritized on these shows, not positioning a "traditional" marriage as the ultimate endgame allowed these relationships to flourish. It's not like recent Bachelor seasons have ended with many lasting engagements, anyway. Why not switch up the formula?

As a longstanding, wildly popular reality show franchise, The Bachelor has the power to make meaningful change on TV and beyond. But if it wants to hold onto that power among calls for better treatment and representation of marginalized communities, big, lasting changes are going to have to happen — and soon.