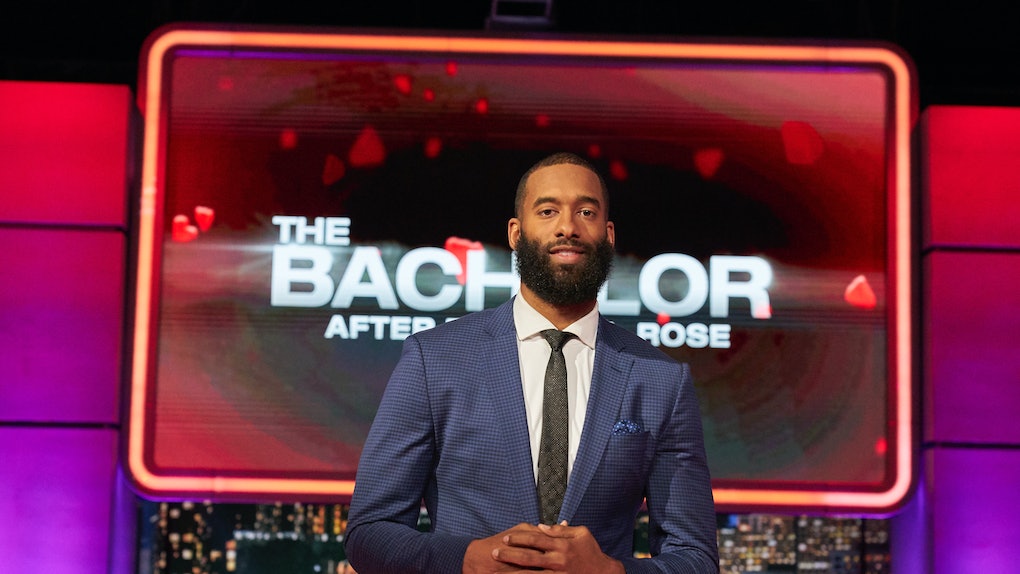 Warning: Spoilers for The Bachelor's Season 25 finale follow. Matt James had everyone talking after he gave his final rose to Rachael Kirkconnell, not Michelle Young. The decision caused a stir among fans in the wake of allegations about Kirkconnell's racist behavior (and her subsequent apologies). But during "After The Final Rose," James revealed he and Kirkconnell broke up in the aftermath of the controversy. Now, Matt James' first tweet after The Bachelor finale is adding to the drama.

While appearing on the "After the Final Rose" special on Monday, March 15, James, who is the show's first Black male lead in the franchise's 19-year history, admitted he didn't think the rumors about Kirkconnell were initially true. "You wanna believe that you know your person better than anybody else knows your person," James said. "I dismissed them as rumors because that’s what they were to me. You hear things that are heartbreaking and you just pray they’re not true. And then when you find out that they are, it just makes you question everything."

On Feb. 11, Kirkconnell released a statement apologizing for 2018 photos that resurfaced of her at an "Old South" plantation-themed fraternity party. "At one point, I didn't recognize how offensive and racist my actions were, but that doesn't excuse them," Kirkconnell wrote on Instagram. "They are not acceptable or okay in any sense. I was ignorant, but my ignorance was racist."

James said the incident made him question his relationship with Kirkconnell. "When [Rachael] spoke out and publicly acknowledged that she would do better and she apologized is when I was finally able to take a check on myself and see where I was at," he said. "And I wasn't OK. Because it was in that moment in the conversation that I had that Rachael might not understand what it means to be Black in America."

The day after the special aired, James jokingly tweeted, "Google Therapist Near Me," a message that certainly referenced all he's been through — both on and offscreen. Of course, fans immediately poured in with supportive comments, wishing him well.

While he may not have gotten his happy ending, it's nice to see James take this all in stride.

More like this
Why Isn't James Charles Hosting 'Instant Influencer' Season 2? The Show's Changing Things
By Abby Monteil
Regé-Jean Page's Tweet About Losing A 'Krypton' Role Reportedly Due To His Race Is Candid
By Abby Monteil
Matt James & Rachael Kirkconnell Reportedly Aren't Together After Their Rumored Reunion
By Joyann Jeffrey
Stay up to date