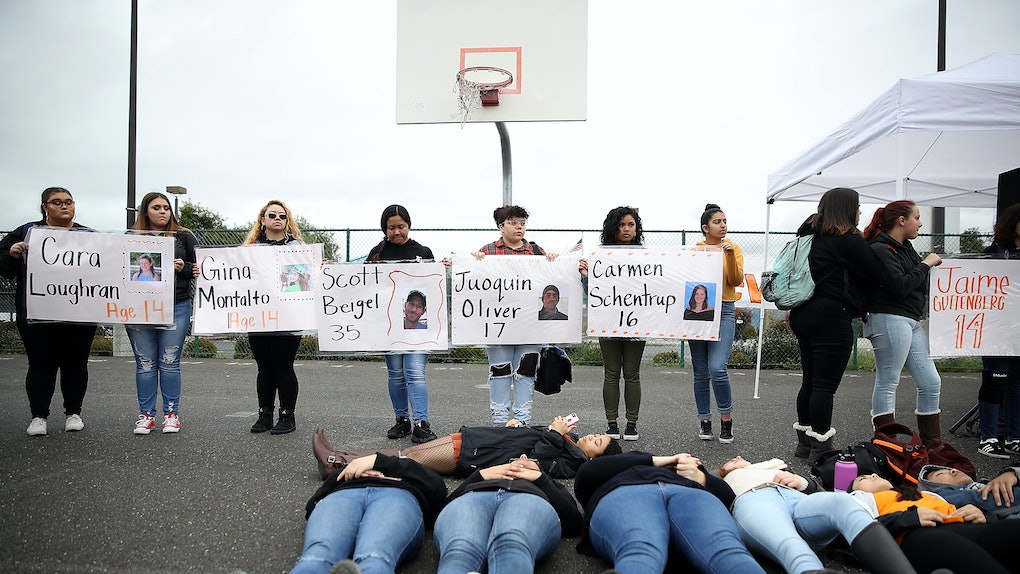 What Is The March For Our Lives For? The Mission Is Clear

Just over a month since one of the deadliest school shootings in the country's history, survivors of the Parkland shooting are gearing up to make their voices heard on Capitol Hill. The mission of March For Our Lives is to demand action addressing gun violence in schools to make sure it doesn't happen again. In their march on Saturday, March 24, organizers will call on the nation's leaders to pass legislation that will target various aspects of the problem.

The March For Our Lives (MFOL) was organized by students of Marjory Stoneman Douglas High School in Florida after a former student opened fire on campus on Feb. 14, killing 17 students and staff. In response, survivors and their allies took up the issue of gun violence with breakneck speeds, rallying support for a platform of change and organizing mass demonstrations in a matter of days. What started as a hashtag, #NeverAgain has become the rallying cry of the activists, whose energy has ignited an entire movement with worldwide support.

The mission of the MFOL and the broader #NeverAgain movement centers around pressuring politicians to take action on clear gun control measures to prevent future mass shootings from happening, in schools and otherwise. The point of the march, specifically, is "to demand that [students'] lives and safety become a priority," the MFOL mission statement reads. "The mission and focus of March For Our Lives is to demand that a comprehensive and effective bill be immediately brought before Congress to address these gun issues."

The MFOL is the second of three major demonstrations to take place this spring; the Enough! Walkout took place on March 14, with tens of thousands of participants in schools nationwide. The MFOL, happening this Saturday, will be followed by the National School Walkout on April 20.

The MFOL is happening this Saturday, March 24 at 12 noon. The official march will take place in the nation's capital, joined in solidarity by sibling marches are being held throughout the country and around the world. As of writing, the website reports over 800 solidarity marches have been planned worldwide and counting.

Like all the major demonstrations taking place this spring in protest of school gun violence, the MFOL is being led and organized by students. Specifically, the students spearheading the march this Saturday are survivors-turned-activists from MSD.

Beyond showing up at the marches with a sign in hand, there are multiple ways to show support this Saturday. For example, people can donate to the march, organize a march in their area, sponsor participants, and provide lodging for them.

In addition to supporting the march efforts, organizers are calling on citizens to get involved with broader actions in keeping with its mission of holding politicians accountable for change on gun control. In particular, they're encouraging people to register to vote and sign their petition demanding legislation on the issue.

The petition calls for specific gun-control provisions including banning the sale of high-capacity magazines and assault-style weapons like the one used in the Parkland shooting, but makes clear that it is not seeking to take away firearms in general. It also calls for closing loopholes on background checks.

"We support the right of law-abiding Americans to keep and bear arms, as set forth in the United States Constitution," the petition reads, "But with that right comes responsibility. We call on all the adults in Congress elected to represent us, to pass legislation that will protect and save children from gun violence."

Organizers have also been calling out Congress' avoidance — even explicit blocking — of measures meant to address gun violence. David Hogg and Emma Gonzalez, two of the MSD students leading the march, have publicly condemned the National Rifle Association and politicians taking money from the powerful gun lobby, including the president.

The MFOL is receiving widespread support. Artists like Ariana Grande and Miley Cyrus have announced they'd be performing at the official march, while other celebrities have donated hundreds of thousands of dollars to the cause. Beyond financial backing and performances, numerous other big names in the entertainment world have publicized their support for the MFOL and its mission in various ways.

Lyft will also be giving free rides to and from marches across the country, and a network to provide lodging for students traveling to the DC march has also apparently been set up, according to WUSA.

With the sheer volume of sibling marches already listed worldwide, the MFOL has the potential to be a massive demonstration that will go down in history books. As of writing, 39,000 people had indicated they'd attend and another 93,000 indicated they were interested, per the official Facebook event — and that's just one of over 800.