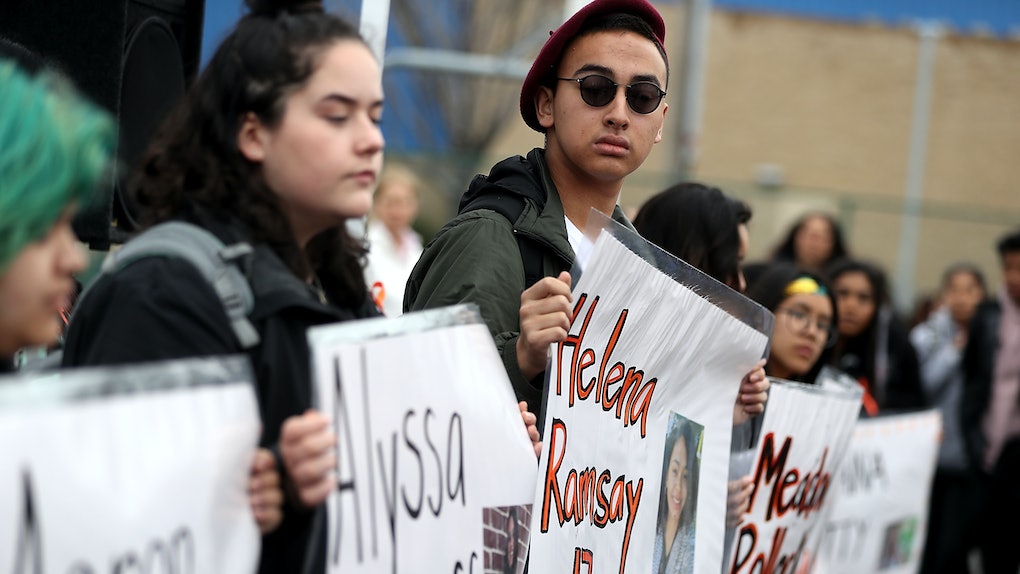 Who Organized The March For Our Lives? The Parkland Survivors Are Leading The Way

By the time the March For Our Lives gets underway on Saturday, March 24, most people will likely know the cause the demonstration stands for: a push for gun control legislation in response to the Feb. 14 shooting in Parkland, Florida. Most people are also likely to know who will be there, as a series of celebrities continue to publicly announce their support for the march. A less-known fact, though, is who exactly organized the March For Our Lives.

The march is collaboration between two groups. The first of those groups is made up of the number of Parkland survivors who started the Never Again movement. The movement was founded by Marjory Stoneman Douglas High School student Alex Wind, along with four of his friends, according to the BBC.

"In Newtown the students were so young they couldn't stand up, but trust me — we are going to be the change," Wind told the BBC, referencing the 2012 mass shooting at Sandy Hook Elementary School in Newtown, Connecticut.

The second group, with which Never Again is partnering, is a non-profit organization called Everytown For Gun Safety. Everytown is led by Michael Bloomberg, the former mayor of New York City.

On Wednesday, March 14, the same day as the National Student Walkout On Gun Violence, Everytown released a statement saying it expects over 700 marches — affiliated with the March For Our Lives main event in Washington D.C. — to take place nationwide on March 24.

“A month after Parkland, the NRA’s allies in Congress keep talking about everything but the real issue — the too-easy access to guns in this country. Bending over backwards to not talk about gun violence is exactly what the NRA wants, but it’s not what the American people want. The midterms are coming up, and if Congress caves to the NRA this time, voters will throw them out,” John Feinblatt, the president of Everytown For Gun Safety, said in the statement.

During a nationally televised interview with ABC the weekend after the Parkland shooting, a group of Stoneman Douglas students spoke about the premise of the March For Our Lives.

“People are saying that it’s not time to talk about gun control. And we can respect that,” Stoneman Douglas junior Cameron Kasky told ABC. “Here’s a time. March 24th in every single city. We are going to be marching together as students begging for our lives.”

Three days later, Oprah Winfrey took to Twitter to announce that she is pledging hundreds of thousands of dollars to the cause, matching a similar pledge made by George and Amal Clooney,

"George and Amal, I couldn't agree with you more," Winfrey tweeted. "I am joining forces with you and will match your $500,000 donation to 'March For Our Lives.' These inspiring young people remind me of the Freedom Riders of the 60s who also said we've had ENOUGH and our voices will be heard."

Since then, the march has received vocal and financial support from a list of well known figures that not only includes Oprah and the Clooneys, but also stars like Miley Cyrus and Ariana Grande, the latter of whom is herself a survivor of a mass shooting that targeted a concert of hers in the UK.

"We're gonna have four major independent women that are standing with us and walking beside us, and those are Ariana Grande, Jennifer Hudson, Miley Cyrus and Demi Lovato," senior David Hogg told CNN on Wednesday, March 14. "They're gonna be standing there with us and marching with us and they're some of the few people that are really coming out and stepping up with us."

In terms of actually organizing the demonstration, though, neither of the aforementioned celebrities are more notable than the students behind the Never Again movement, who will be leading the way at the March For Our Lives.