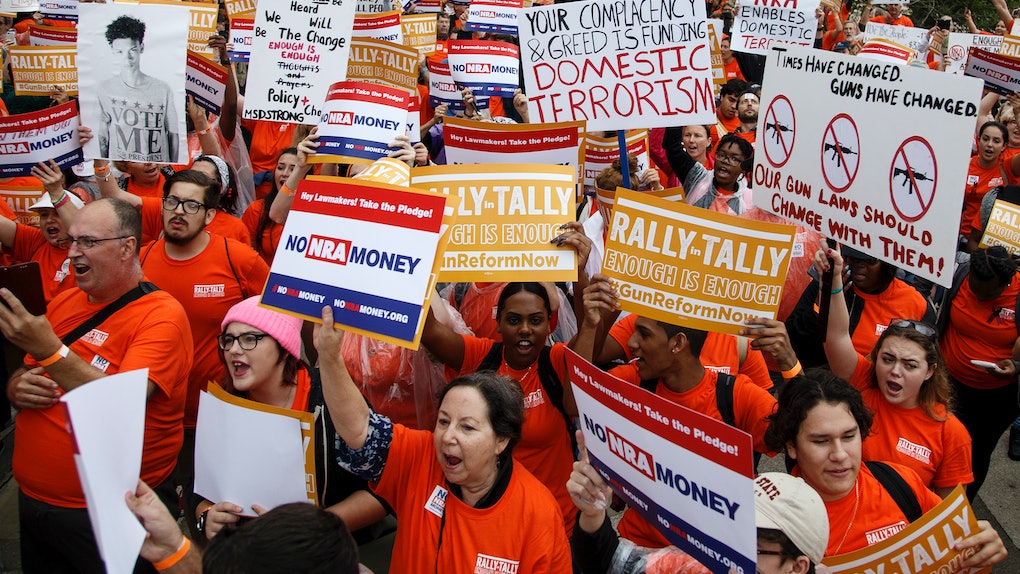 On Wednesday, March 14, students, teachers, and parents from around the country walked out of schools to advocate for gun control legislation. The protest, officially dubbed the National Student Walkout On Gun Violence, comes exactly one month after a gunman killed 17 people at Majory Stoneman Douglas High School in Parkland, Florida. Photos of the National Student Walkout On Gun Violence show the vast scope of the countrywide demonstration.

The scenes came from protests in major cities like Atlanta, Philadelphia, and New York City, where New York Governor Andrew Cuomo joined in on one demonstration. Protests were also held in suburbs, like Alexandria, Virginia, which sits just outside of Washington D.C., and in smaller towns and cities across the country.

In all, over 1,000 protests were scheduled to take place Wednesday, according to NBC News. A description of the protest on its official site reads,

Women’s March Youth EMPOWER is calling for students, teachers, school administrators, parents and allies to take part in a #NationalSchoolWalkout for 17 minutes at 10 a.m. across every time zone on March 14, 2018 to protest Congress’ inaction to do more than tweet thoughts and prayers in response to the gun violence plaguing our schools and neighborhoods. We need action. Students and allies are organizing the national school walkout to demand Congress pass legislation to keep us safe from gun violence at our schools, on our streets and in our homes and places of worship.

Here are a series of images from the demonstrations:

At Leadership & Public Service High School in Manhattan's Tribeca district, Gov. Andrew Cuomo joined protesters in lying on the ground — seemingly performing what is often referred to as a die-in protest — according to The New York Times.

Elsewhere in New York City, Mayor Bill de Blasio met with hundreds of students to show support for the walkout.

“We’re tired of our representatives who aren’t paying attention to the young voices,” Melanie Cruz, a senior at Teaneck High, told NorthJersey.com. “We hope to send a message on a local, state and national level about how upset we are and how our leaders need to do more to end gun violence.”

One of the larger demonstrations on Wednesday saw students walk from the White House to Congress' door step, on Capitol Hill. There, House Minority Leader Nancy Pelosi (D-CA), along with other Democrats, spoke before the crowd.

The National School Walkout also had an international presence, with students at The American School in London honoring the 17 victims of the Parkland shooting, per ABC News.

"Although we are not directly affected in the UK, a number of us are American and have many connections to the U.S," student Izzy Harris told ABC.

In Colorado, students and parents demonstrated at the site of significant mass shooting that came before the turn of the century: the massacre at Columbine High School. There, parents of victims of the massacre planned to join students who were walking out at part of the national movement.

One student said he and others were demonstrating because they could relate to the teens who became victims in Parkland, Florida.

“We saw people in classrooms just like ours, wearing clothes just like ours, they looked like they could have been any one of us at any of our schools,” 15-year-old student Sam Craig told The New York Times, ahead of the protest. “And seeing them lying in pools of blood was really powerful for us.”