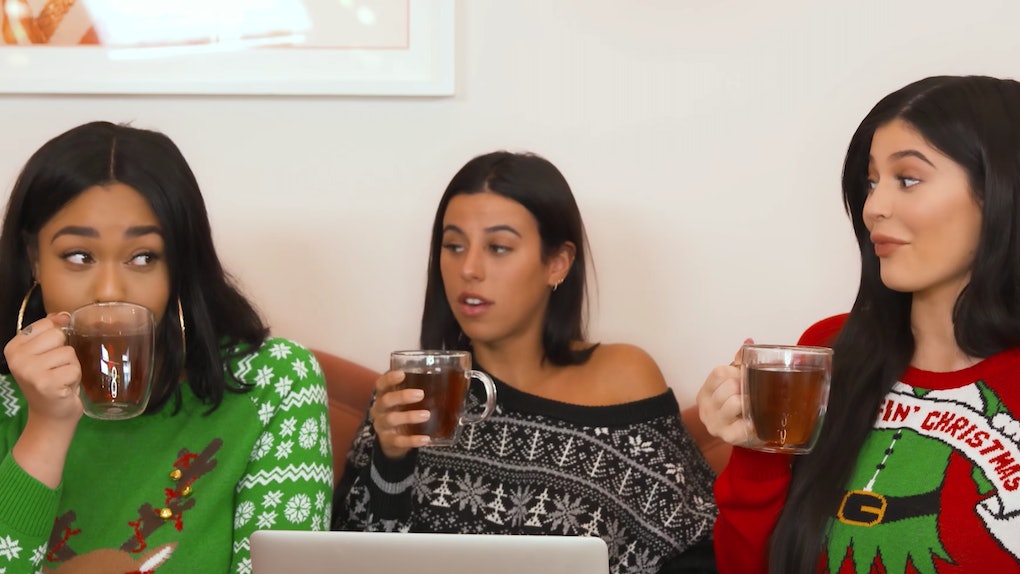 Happy almost Christmas from Kylie Jenner and her maybe-baby! The 20-year-old reported mom-to-be is getting into the holiday spirit with her bestie, Jordyn, and assistant, Victoria, and we have the footage. A new video of Kylie Jenner in a Christmas sweater is acting as more proof (if anyone needed it) that she must be hiding a baby bump under there. Of course, fans are jumping all over it.

Ever since reports broke that Jenner is expecting, she's done a suspiciously impeccable job hiding from photographers and only appearing from her waist up on social media. At the end of September, multiple sources confirmed to People magazine that she and boyfriend, Travis Scott, have a little one on the way and it's been one big race to spot her baby bump ever since.

No one, and we mean no one, from the Kardashian-Jenner family has confirmed or denied anything, leaving fans' imaginations to run wild. (We did receive one weird comment from Kris Jenner early on, but I seriously don't count it because honestly WTF are you even saying, Kris?)

In the holiday themed video, Jenner, Jordyn, and Victoria gather to play a game of "Never Have I Ever." Traditionally, this is how the game works: If a player has participated in or completed the activity stated, they have to drink. Usually, players drink some sort of alcoholic beverage, but in Jenner's case, she's drinking tea. Coincidence? I THINK NOT.

The rest of the video is fairly straightforward. Most of the girls admit to your usual millennial shenanigans, like kissing someone in the rain, hooking up in a bathroom, or being kicked out of a nightclub.

Ugh. Time (and Kris Jenner, probably) will only tell.

Kylie's oversized Christmas sweater is just one large top in a series of large tops she's been rocking lately, adding more fuel to the media fire.

For someone so heavily involved in social media, she's very strategically only posted old pics from previous photoshoots, selfies from the neck up, or images wearing giant-ass jackets and shirts.

Nice try Jenner, but your die-hard fans have caught on to the hard shift in your content. Known for baring her body in revealing pics and sultry selfies, this more covered-up look is our biggest clue that she's hiding something.

Of course, the entire Kardashian family has been keeping us on our toes, as older sisters Khloé and Kim are also reportedly growing their families. Kim has confirmed she is expecting a third child via surrogate with husband Kanye West sometime very soon, and reports suggest Khloé also has a bun in the oven with her boyfriend, Tristan Thompson.

With so many babies going around, it's hard to keep track. It also makes it somewhat easier for Jenner to hide amongst the rumors.

Still, People magazine reports that Jenner threw herself a totally private and low-key baby shower just one day after Kim's super public baby shower extravaganza. While Kim's party was all over our news feeds, Jenner's get-together was strictly kept off of social media.

Reports are also placing Jenner's due date sometime in February, around the same time Khloé is expected to have her baby as well. (Ya know, if she's having a baby at all.)

If all of our major hunches are correct, we can expect a 2018 full of brand new Kardashian-Jenners, and hopefully one Kardashian Kids spinoff.