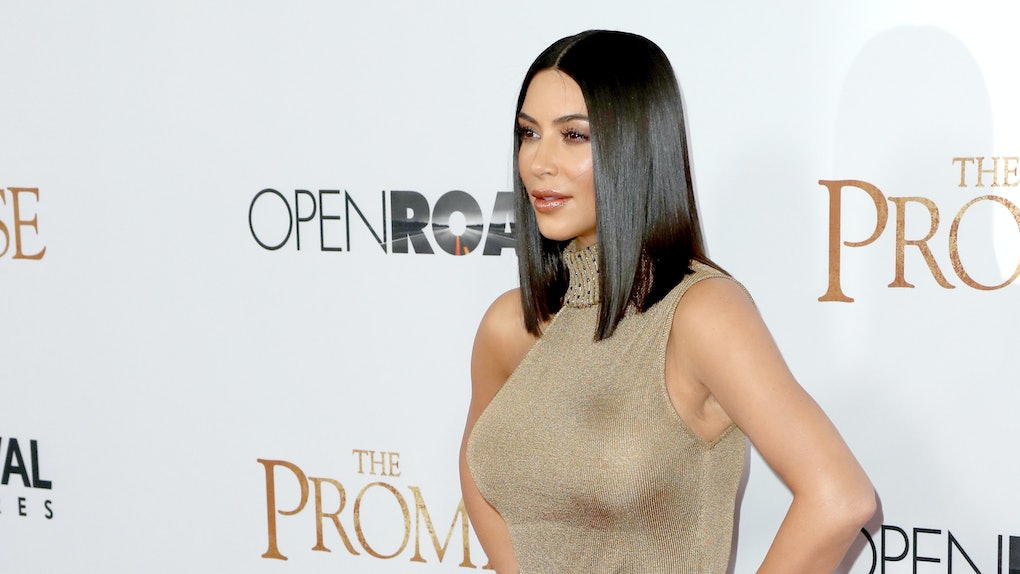 The Kardashian-Jenner clan is certainly a fertile group. Though pregnancy rumors surround some of its members, Kimye is without question getting ready for tiny tot number three. Kim Kardashian's baby shower on Nov. 11 was a decadent get-together with family, friends, and a bunch of cherry blossoms — just as lavish as you'd expect from the reality TV mom.

The event was a "Tea for 3" theme filled with rustic tables that were surrounded by a beautiful forest of pink trees. Naturally, Kim's sisters were in attendance, as well as friends like Chrissy Tegien and celebrity hairstylist Jen Atkin. Kim, the queen of party favors, decided to hand her guests KKW Beauty products that have yet to be released, which include Crystal Gardenia, Crystal Gardenia Citrus, and Crystal Gardenia Oud fragrances. Talk about a fun goody bag.

Naturally, photos of the gorgeous affair made the rounds on social media. Khloé rocked a light blue off-the-shoulder dress while John Legend's favorite lady dazzled in an emerald green dress. Photos of Kylie Jenner — perhaps the most talked-about member of the family because of her pregnancy rumors — have yet to emerge, although the youngster did take to Snapchat to post photos of the pink décor. Even little Nori was enjoying the festivities.

Have a look at photos from Kim's shower below — you'll definitely be pink with envy.

Earlier this year, the reality starlet confirmed that she and her husband, rapper Kanye West, were expecting their third child via a surrogate. The baby will arrive at the beginning of 2018. A source revealed to People just how excited the couple is to welcome a new addition to their family — a sibling for North, 4, and Saint West, who is turning 2 next month. The source said,

The entire family is over the moon. Kim had been looking for a surrogate for months until recently when she found the perfect candidate. Given her health scares in the past, Kim felt the need to hire a surrogacy agency that helped serve as the liaison in finding a healthy woman who would be a great surrogate option for her and Kanye. Both of them have been super involved in the process.

In between headlines about her growing family, Kim did find a little bit of time to throw some shade at her "favorite" pop star. Kim took little Nori to see Katy Perry perform in concert at the Staples Center in Los Angeles. Sounds all fine and dandy, huh? The selfie of the three ladies — complete with duck faces, funky sunglasses, and one heck of a makeup job on Ms. Perry —definitely got people talking for one major reason.

This seems perfectly innocent... except for the fact that the photo emerged the same day as Taylor Swift's new album. It's no secret that Ms. Swift has bad blood not only with Katy Perry, but Kim and Kanye, too. Could this photo mean that Kim was joining forces with Tay's enemy? Will the jabs continue? She might as well get in all the drama she can before her infant arrives on the scene.

Needless to say, it's definitely a busy time for the Kardashian-Jenner family. There are dating rumors, pregnancy rumors, and of course, an ample amount of drama (as per usual). Next thing fans are hoping for? A confirmation from Kylie Jenner about her pregnancy... if, in fact, she's pregnant at all. These Snapchat clues are sending people over the edge.

Anyway, congrats Kim — the one member of the reality TV empire who is no longer toying with fans' curious minds. Like winter, the baby is coming. It's your turn, Kylie and Khloé.