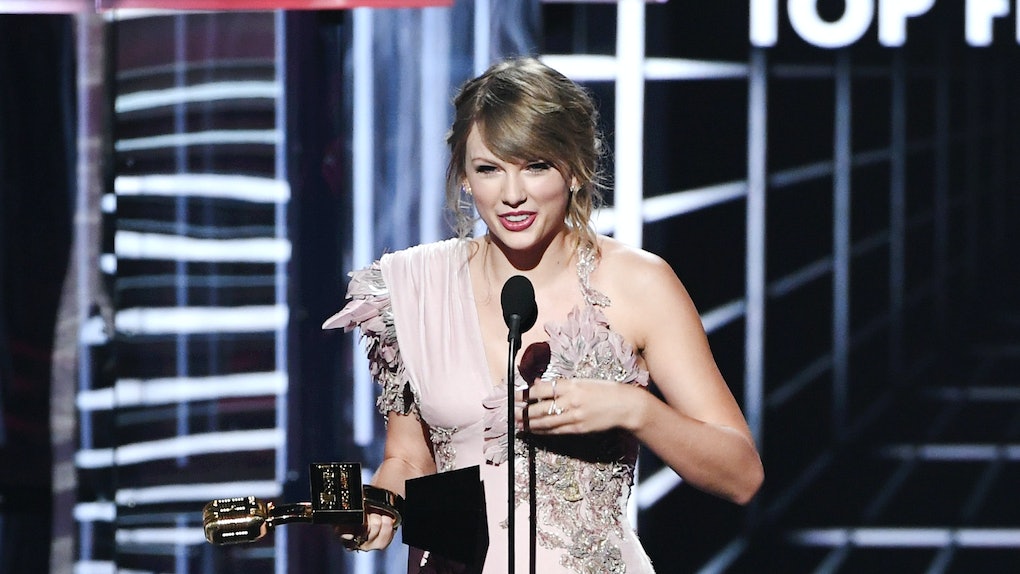 Taylor Swift's Reputation Stadium Tour is in full swing, and the singer recently took a moment during her concert in Chicago to acknowledge that June is Pride Month. Swift took some time during her show to talk to the crowd about some of the LGBTQ+ issues highlighted during the month of June. These tweets about Taylor Swift's Pride Month speech show that her fans are very much here for the positive message the singer shared on Saturday night.

Thanks to fan videos posted to Twitter, people can see part of the speech Swift gave to the crowd during her show in Chicago, Illinois on Saturday, June 2. Swift apparently talked about Pride Month before performing "Delicate." In a video posted to Twitter by @LaineyC94, you can hear some of Swift's speech. As of Sunday morning, the video had over 100,000 views.

The singer sent her "love and respect to everybody who has been brave enough to be honest about how they feel, to live their lives as they are, as they feel they should be, as they identify..." Swift also spoke to the difficulties members of the LGBTQ+ community might face when they come out when she told the crowd, "…It’s even more brave to be honest about your feelings and who you love when you know that that might be met with adversity from society."

Speaking about the celebration of Pride Month, Swift also shared, "This is a month where I think we need to celebrate how far we’ve come, but we also need to acknowledge how far we still have left to go..."

Once the video started making the rounds on Twitter, fans couldn't help but share how much they appreciated Swift's words.

Near the end of her speech, Swift shared her love with anyone who "hasn’t yet felt comfortable enough to come out" when she said,

And I wanna send my love and respect out to everybody who, in their journey in their life, hasn’t yet felt comfortable enough to come out, and may you do that in your own time. And may we end up in a world where everyone can live and love fully, and no one has to be afraid to be vulnerable and say how they feel.

She then transitioned the speech to her song, "Delicate," when she said, "Because when it comes to feelings and when it comes to love and searching for someone to spend your whole life with, it’s all just really, really delicate, you know?"

Ooh Taylor, you're so slick with that "Delicate" transition.

Fans loved every bit of her speech, and it's refreshing to hear Swift speak out on more issues, since the superstar is usually quiet on what could be controversial topics. In 2018, you might not think of LGBTQ+ equality as a particularly polarizing issue, but there is still a long way to go when it comes to continued progress for the LGBTQ+ community.

If you're inspired to do more in terms of support for the LGBTQ+ community, you can look up when your local Pride parade is happening in the month of June. Before you go, you can also refresh your memory about why the LGBTQ+ community celebrates Pride Month in June. You likely know about the 1969 Stonewall Riots, which were in protest to police brutality and discrimination against gays, but there is so much more to learn about the history of Pride Month.

Pride celebrations are taking place all month long, so you have plenty of chances to find one near you or road trip to your favorite city to get involved.

More like this
21 Taylor Swift Lyrics About Breakups You'll Relate To All Too Well
By Joyann Jeffrey
Is Olivia Rodrigo's "Good 4 U" About Joshua Bassett? Fans Are Convinced
By Michele Mendez
Olivia Rodrigo Explained Why She Likes Songwriting More Than Dropping Music
By Sydney N. Sweeney
Stay up to date