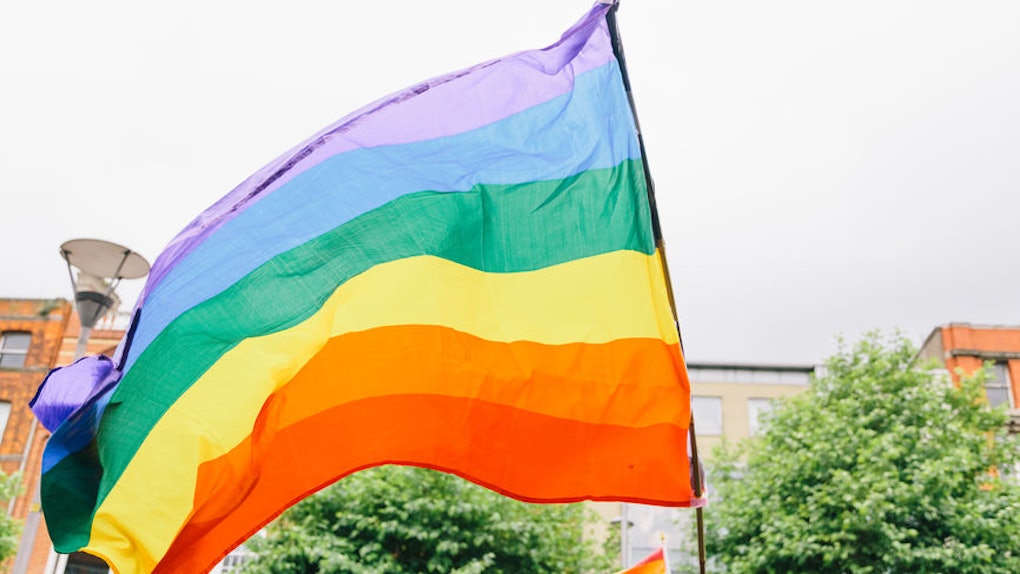 When Is The Pride Parade Near Me? Here's A List Of Parades Across The Country

June is Lesbian, Gay, Bisexual and Transgender Pride Month, which means LGBTQ+ Pride parades, festivals, and celebrations are taking place across the country. If you're wondering when the Pride parade is near me, I've got your back. Below is a list of every official U.S. Pride event happening throughout the month of June. While some U.S. cities celebrate Pride on a specific day or weekend in June, other celebrations last for an entire week or more. In addition to the traditional Pride parade, there are often other festive activities and forms of entertainment, including musical performances, dance parties, celebrity guests, and more.

Some cities require you to purchase parade tickets ahead of time and/or pre-register large groups of people. There are also many opportunities to volunteer during Pride. Be sure to check out all the guidelines and prices on your city's Pride website before the big day. Some of the organizations on this list may not have announced the official dates or times for their 2018 events at the time of this article's publication. Be sure to check out the International Gay & Lesbian Travel Association's website for a periodically updated calendar of 2018 Pride events happening around the United States as well as across the world.

Black and Latino Gay Pride's "Say It Loud" festival has events running from June 1 until June 9, with a celebration on June 9 in Washington Park in Albany, New York.

The Naples Pride Festival is from 11 a.m. to 5 p.m. on June 2 in Cambier Park in Naples, Florida.

Brooklyn Pride runs from June 3 until June 9, which is Pride Day in Brooklyn, New York.

Key West Pride is being celebrated in Florida from June 6-10, with the Key West Pride Parade starting at 5 p.m. on June 10 on Duval Street.

This year's Capital Pride celebration in Washington D.C. is June 7-10, with the theme "Elements of Us." The parade is June 9, while the festival and concert will take place on June 10 with headliners Troye Sivan, Alessia Cara, MAX, and Asia O'Hara.

New Orleans Pride is June 8-10 this year, with the parade on June 9 in New Orleans, Louisiana.

Long Island's Pride on the Beach is back and bigger than ever from June 8-10, with the parade from 12-2 p.m. on June 10, ending at Long Beach on Long Island, New York.

Los Angeles Pride Week is June 1-10, but the festival is June 9-10, with the parade taking place from 11 a.m. to 2 p.m. on June 10 on Santa Monica Boulevard in West Hollywood. The weekend festival features a concert headlined by Kehlani (June 9) and Tove Lo (June 10).

Boston Pride week is June 1-10 this year, and the parade will take place at noon on June 9 from Copley Square to City Hall Plaza in Boston, MA.

Albuquerque PrideFest is June 7-9, with the pride parade planned for 10 a.m. on June 9 at Central Ave in Nob Hill, and ending on San Pedro Drive in Albuquerque, New Mexico.

The Sacramento Pride parade and march will take place at 11 a.m. on Sunday, June 10, beginning at 3rd and N street in Sacramento, California.

The Philly PrideDay parade starts at 11:30 a.m. on June 10, at 13th and Locust Streets in Philadelphia, Pennsylvania.

Ohio's Stonewall Columbus Pride is being celebrated from June 15-17, with the parade kicking off at 10:30 a.m. on Saturday, June 16 at Goodale and High in the Short North Arts District.

Tri-State Black Pride, the official Black Pride for Memphis, Tennessee, is being celebrated June 14-17 this year.

Denver PrideFest 2018 is June 16 and 17, with the Coors Light PrideFest Parade beginning at 9:30 a.m on Sunday, June 17 at Cheesman Park in Denver, Colorado.

Baltimore Pride weekend is June 16-17. The Pride parade and block party opens the festivities on Saturday, June 16 in Baltimore, Maryland.

The Chicago Pride festival is June 16-17, while the four mile-long parade will take place on Sunday, June 24.

Oklahoma City Pride weekend is June 22-24, with the parade beginning at 6 p.m. on Sunday, June 24 at the intersection of Classen and 39th Street in Oklahoma City, Oklahoma.

The San Francisco Pride parade and celebration is planned for June 23-24, with the parade on Sunday, June 24 from Market and Beale to Market and 8th Streets in downtown San Francisco, California.

The Cincinnati Pride parade will take place on June 23 this year in Sawyer Point, starting at the intersection of 7th Street and Central Avenue in Cincinnati, Ohio.

Nashville Pride is June 23-24 in Public Square Park, and the Nashville Pride Equality Walk takes place at 10 a.m. on Saturday, June 23 beginning at 2nd Avenue and Commerce in Nashville, Tennessee.

Houston Pride day is Saturday, June 23. The Pride festival kicks off at noon, while the parade begins at 8:30 p.m. in downtown Houston, Texas.

NYC Pride lasts an entire week, with the march stepping off at noon on Sunday June, 24 on 7th Avenue and 16th Street in New York City.

The Seattle Pride parade starts at 11 a.m. on June 24 on 4th Avenue and Union Street in downtown Seattle, Washington.

The Lexington Pride Festival is Saturday, June 30 in Lexington, Kentucky.

San Antonio Pride is June 30, with the parade kicking off at 9 p.m. at the intersection of Dewey Place and North Main in San Antonio, Texas.

Happy Pride! Have fun, be safe, and, of course, celebrate loud and proud.