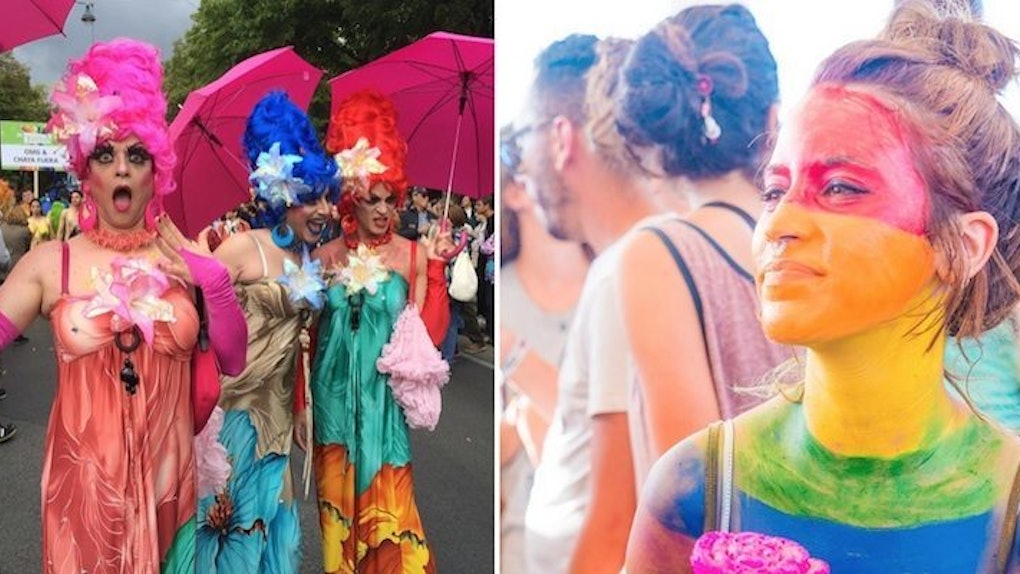 Loud, Proud And On The Town: 20 Amazing Looks From LGBTQ Pride Parades

Like knitting or playing flip cup, dressing for a Pride Parade is an acquired skill.

Each year, photos from LGTBQ marches in major cities like Tel Aviv and Toronto take over our social media feeds.

With seemingly endless quantities of vibrant paint and glitter, attendees dress themselves in all their rainbow brights for the special occasion.

As 7-foot-tall drag queens in stilettos prepare to pound the pavement in New York City and San Francisco this weekend, all we drably-dressed office workers can do is admire their panache through snapshots of the day.

If you're still planning this weekend's outfit, pull inspiration from all of our favorite looks.

Matching unitards made a team statement at Vienna's pride parade.

Chicago's very own pride princess turned out to be none other than an adorable Corgi.

An attendee in a sewed-with-style bondage suit showed off in Portland.

When in doubt, avoid all attempts at subtlety.

These Barcelona pride attendees went for "less is more," and it's hard to tear your eyes away.

Denver's very own LGBTQ velociraptor made a parade appearance.

The city also welcomed a pair of bedazzled would-be Egyptians.

In Vienna, the best drag came in sets of three.

As superhero costumes go, this one wasn't bad.

This woman couldn't decide on a costume, so she became the pride flag instead.

But her fellow Israeli pride goers opted for the classic "sexy bunny," instead.

Did someone say "more feathers"?

Even the smallest details counted at Houston's pride parade.

This is the side of Star Wars no one talks about.

These Denver walking condoms were a very visible reminder of the importance of using protection.

But, they weren't the only ones to show off the goods.

One attendee even made her own design out of colorful balloons. Beat that, New York.