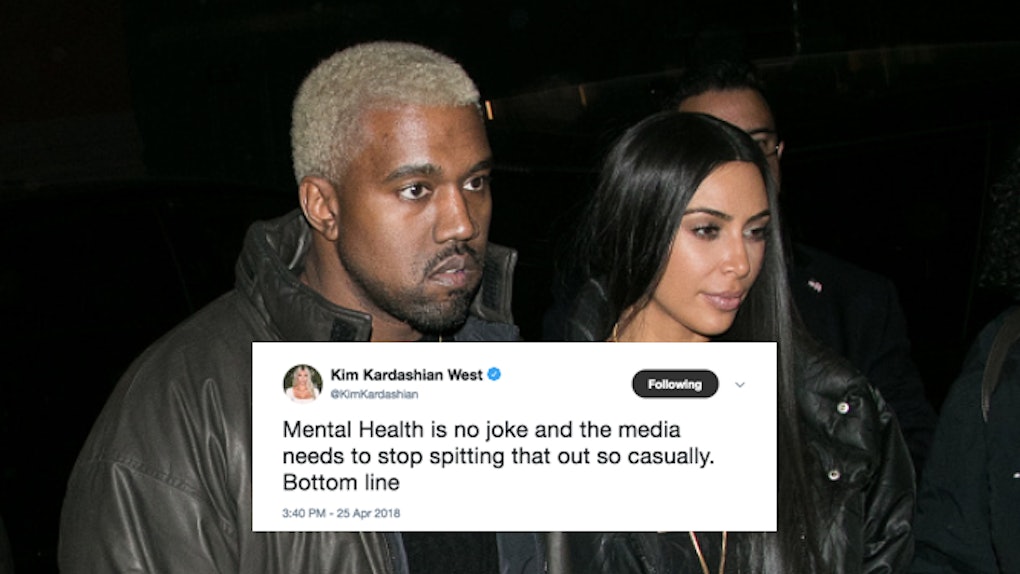 As you may or may not have heard, there's been a lot of drama on social media regarding Kanye West's decision to openly support President Donald Trump on Twitter. Not surprisingly, the love and good vibes he expressed for Trump have been met with some serious backlash, but what started as expression of differing opinions soon became tweets about Kanye West and the state of his mental health, implying that his support for Trump was supposedly "proof" the singer was unstable, not just expressing an unpopular opinion.

It was these sentiments that led his wife, Kim Kardashian, to both support her husband, despite her differing political beliefs, and to speak out with what she calls a bottom line: that mental health is no joke. Kardashian claimed in a series of tweets that the media needs to stop throwing mental illness around and labeling people so casually, as it's both harmful and irresponsible. She wrote,

To the media trying to demonize my husband let me just say this... your commentary on Kanye being erratic & his tweets being disturbing is actually scary. So quick to label him as having mental health issues for just being himself when he has always been expressive is not fair

He’s a free thinker, is that not allowed in America? Because some of his ideas differ from yours you have to throw in the mental health card? That’s just not fair. He’s actually out of the sunken place when he’s being himself which is very expressive

Kardashian went on to explain that, while she does not share in her husband's opinions, she does support that he has his own views, and that he is always free to express those views — period.

And BTW, just to reiterate, this particular point she's making (that mental health is no joke) doesn't really have anything to do with West's political beliefs, however off-base they may seem to you, or to anybody. It simply has to do with the way people unfairly and quickly label West as "crazy," and the way people assume he must be going through a "breakdown," with only his political expressions as "evidence."

Thankfully, Twitter users totally understood where Kim K was coming from, and commended her for not only defending her husband, but for making such an important point about mental health issues.

What gets a bit tricky and unfortunate, though, is that some of this immediate and irresponsible "diagnosing" on social media and in the press likely has something to do with West's previous issues with mental health, which came to public attention most memorably in 2016 at The MTV Music Awards, when West went on what media outlets then called an on-stage "tirade" wherein, again, he spoke about Trump. He was hospitalized and cancelled parts of his Saint Pablo Tour not long after that incident.

But it is because of West's history with mental health, in particular, that to quickly label him as mentally unstable is especially insensitive, dangerous, and all-around damaging to the realities of individuals who live with mental health issues. No one — not me, not you, not Donald Trump, literally nobody — truly knows what's going on with West, and it is simply irresponsible and unfair for any of us to offer an interpretation of the state of his mental health, sheerly on the basis of a few tweets. The stigma and misunderstanding around mental health issues is too real to be careless with labels and words, and that's exactly what Kardashian's point was, here: Mental health isn't, and will never be, a joke.