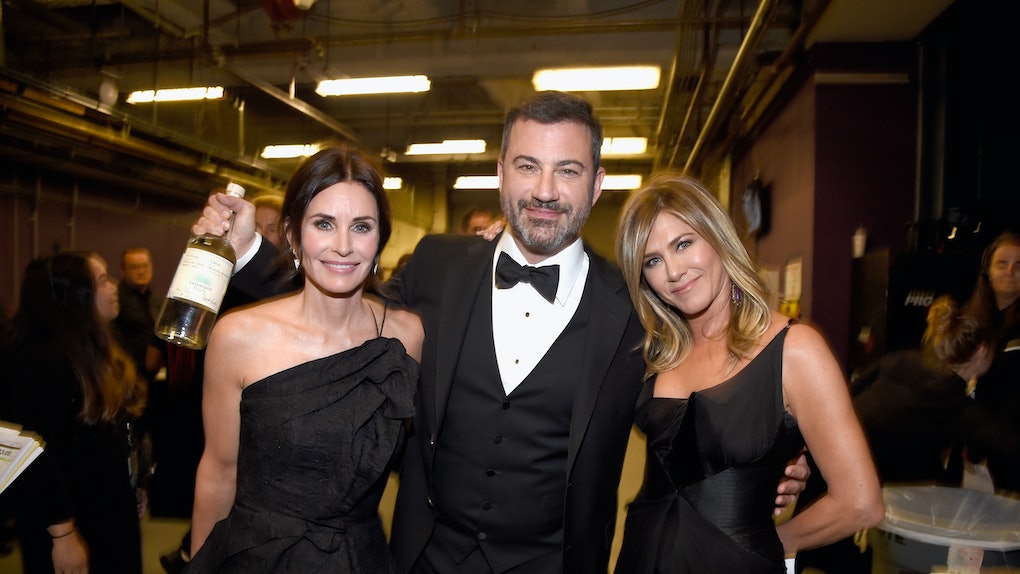 This just in: Jennifer Aniston won Friendsgiving, hands down. For one, her invite list included BFF Courteney Cox, Jimmy Kimmel, Jason Bateman, Will Arnett, and even her ex-husband Justin Theroux. Not only that, but the crew feasted on homemade enchiladas while making heartwarming speeches about each other. But in case you needed a little more proof that this star-studded soiree was epic AF, the pics from Jennifer Anniston’s Friendsgiving circulating on social media should do the trick.

First thing’s first: Aniston invited her ex to Friendsgiving, which officially makes her the chillest person ever. Can’t say I’d ever pull that move, but obvi, she and Theroux have remained close friends since they split at the beginning of 2018. You might recall how Theroux wrote a super sweet, sincere Instagram post about Aniston for her 50th birthday. So, it's safe to say these exes don't harbor hard feelings that their relationship didn't work out. And Theroux seemed to appreciate being included in the holiday celebration, because he posted a selfie of the whole group on his Instagram story, and added that he was “very VERY thankful for these friends and these nights.” Guess my invite got lost in the mail — but at least I can live vicariously through the guests via these IG posts.

Theroux wasn’t the only celeb who had a grand old time. Bateman and Arnett, who co-starred on Arrested Development together, also appeared to have some hilarious exchanges in multiple photos on Theroux’s IG story.

But between all the laughter, Aniston’s friends also shared some heartwarming moments as well. In fact, Theroux captured the beginning of Cox’s speech to Aniston on video. After she realized he was recording, she playfully demanded that he stop filming — after which he apologized, and joked that the speeches will be on the DVD commentary. However, he did manage to catch Cox declaring “Jen, I love you so much" (and Aniston saying ILY back). Friends fans everywhere are officially dead.

And what's a Friendsgiving without a feast? Mexican food may not exactly be a traditional choice on turkey day, but that didn’t stop Aniston from whipping up a batch of enchiladas to please her pal, Kimmel.

Fun fact: The unique cuisine idea stemmed from her appearance on Kimmel’s talk show last year, during which he suggested that they do something a little different for their annual Friendsgiving celebration. Originally, he proposed Italian meatballs, but ultimately settled on the idea of a Mexican-themed “Graciasgiving.” And apparently, guests didn’t mind the unconventional menu item one bit. In fact, Cox commented that she “loved that f*%king enchilada” on Aniston’s IG photo. When Kimmel initially pitched the idea, he predicted that everyone would follow in Aniston’s footsteps (just like they did with “The Rachel” haircut), and TBH, I’m not not thinking about making tacos for Friendsgiving next year.

So, there you have it, folks. If you want to do Friendsgiving right, take a cue from Aniston and incorporate some heartfelt toasts and a non-traditional feast. Oh, and it helps if you have some A-list friends to invite, too. BTW, since Thanksgiving is all about gratitude, let's all take a moment to give thanks that Aniston finally joined IG this year — surely we have some more FOMO-inducing posts to look forward to around the holidays.