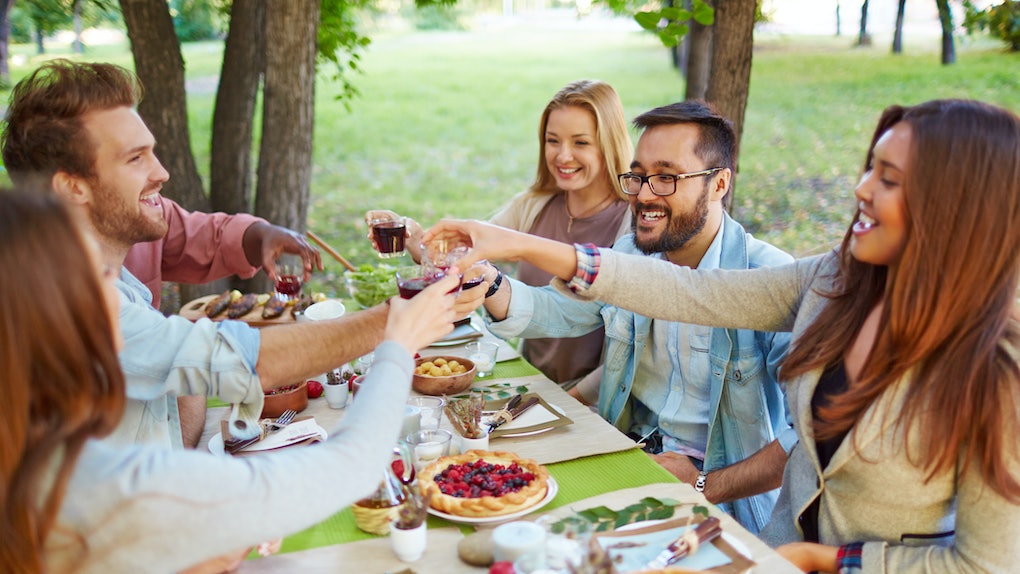 Seeing Your Ex At Friendsgiving? Here’s What Experts Say To Do

Friendsgiving is shaping up to be legendary. Your entire squad is attending, you’ve got your famous vegan apple cranberry crisp recipe at the ready, and you’re even putting together a playlist to set a festive tone for the feast. The only snag? You just found out your ex was invited. Talk about a vibe check. If you know you'll be seeing your ex at Friendsgiving, don’t panic. According to etiquette and relationship expert April Masini, it doeisn’t have to be super awkward.

First thing's first: It's always a good idea to get a little more information. Masini recommends finding out if your ex is bringing a date. That way, you can prepare yourself emotionally. If you've already seen your ex with their new partner, then this may not be a big deal. But if you know or suspect that your former partner is dating someone new, and you haven't met them yet, then you'll definitely want a heads up that they're coming together.

Once you have a better handle on what you're dealing with, Masini recommends thinking about how you can make the experience as positive as possible. If you feel like bringing a date would make you feel more comfortable, that's obviously an option. She notes that even bringing a friend as your "date" might feel comforting. Plus, that way, you can make a pact to go do your own thing if things get awkward.

"Having someone there with you, for support, is going to be a boon to your feelings and a touchstone if you’re not sure what to do," says Masini.

As for what you shouldn't do, Masini advises against downing a fifth glass of sangria when you're feeling nervous. While it's a super common move to seek out some social lubrication, adding alcohol to an emotionally loaded situation can get a tad risky. And as Masini points out, alcohol lowers your inhibitions, so you may end up saying something to your ex or doing something that sober you regrets the next day.

And while we're on the subject of don'ts, Masini says it's important to avoid dredging up the past and discussing your failed relationship at Thanksgiving.

"If you haven’t seen your ex in a while and you left on gnarly terms, it’s easy to want to pick up where you left off — in an argument," she explains. "Refrain. Change the dialogue, and if you can’t, change your seat."

BTW, it may be tempting to say something snarky or passive-aggressive when your ex is talking, but Masini says the best way to maintain your maturity and poise is to stay positive and complimentary. Sure, it might be easier said than done, but the last thing you want to do is add to the tension and make the rest of your friends feel uncomfortable.

"If you need more closure, and your ex is open to resuming the conversation after the holiday weekend, then go for it," she tells Elite Daily. "But not at Friendsgiving."

If you start feeling awkward (and it's totally understandable if you do), Masini says there are a few tactics you can try. One idea is to bust out an activity.

"Having a game or something else to focus on will remediate the awkwardness by taking the focus off of the relationship dynamic and putting it on group bonding," she explains.

Another option is to excuse yourself to make a phone call, take a walk around the block, or even chat one-on-one with a friend who's in attendance. Masini notes that taking a breather can allow you to gain a fresh perspective, and you may be able to come back to the situation feeling stronger and more grounded.

The holidays can be a tough time to see your ex. After all, nostalgia is in the air, and you may find yourself feeling particularly sentimental about the relationship you once had together. If this is the case, don't give yourself a hard time. If you’re going to have to be around your ex, it might as well be while you’re surrounded by friends who love and support you, right? Besides, Thanksgiving is a holiday about gratitude, so when you find yourself feeling a little weird, just take a moment to appreciate all the wonderful people you have in your life, rather than obsessing over the one person you don’t.

More like this
Shanna Moakler's Zodiac Sign Explains So Much About Her Reaction To Travis & Kourtney
By Rachel Shatto
How You Love To Be Spoiled, According To Your Zodiac Sign
By Roya Backlund
Travis Barker Reportedly Covered Up His Shanna Moakler Tattoo
By Lydia Wang
Stay up to date