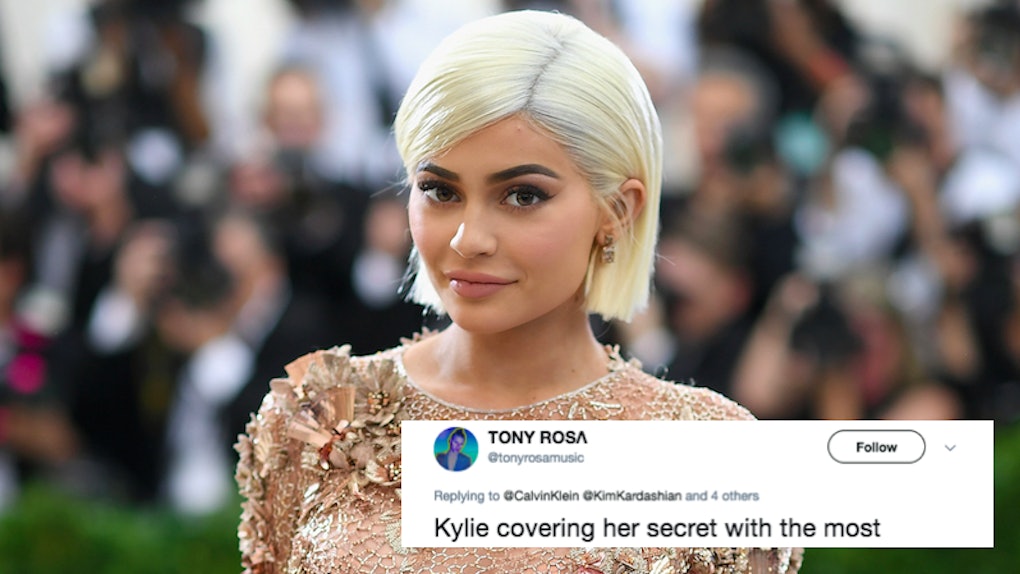 I mean, Kylie Jenner knows she's really making it seem like she's actually pregnant, right? This latest photo just confirms what we believe to be true - her reported pregnancy might be the real deal. In a sexy photo shoot with her sisters, why on earth would Jenner be the only one hiding her stomach? Fans were quick to notice this in new photos of Kylie Jenner in Calvin Klein's campaign.

It's been exactly four months since we first heard the news that Jenner might be expecting her first child with her boyfriend, Travis Scott. Since then, the world has been on one big race to spot her baby bump or be the first to receive confirmation from Jenner herself. Her family has kept their mouths shut, including Kris Jenner.

For me, when the rumors first broke, I looked to the family matriarch first. If there's one thing I know to be true, it's that Kris Jenner hates when false information is circulating about her family. I assumed if this was fake news then Kris would have been all over it. Instead, she gave us one weird comment the day after the story broke and has remained tight-lipped ever since. Even Jenner's sisters dodge the topic in interviews.

Now, the Kardashian/Jenner Calvin Klein photo shoot is basically Jenner's latest way of messing with all of us. Like, girl. We see you.

Let's see. Kim Kardashian's bellybutton? Check. Kendall Jenner's abs? Check. Khloe Kardashian's rib cage? Check. Kourtney Kardashian's side boob? Check. Kylie Jenner's.... upper arm? That's a check, boss. Doesn't it seem particularly suspicious that the whole point of this photo shoot seems to be showing off all of the sister's torsos? In each image, Kylie is very clearly covering her midsection, as if to say, "Ya'll know what I"m doing."

In the first picture, she is dressed in all black and meticulously holding a quilt over her stomach. In the second image, she's wearing a conservative denim shirt and laying in the background behind her sisters. I mean, she's not even in the third photo at all, and in the last image, she's the only sister covering up entirely. With all of this hype, how on earth is she going to actually announce her pregnancy, if and when the time comes?

While we all certainly want to respect Jenner's personal pregnancy process, the crowd is getting a little restless. Lots of people are fed up with the secrecy and just want the truth already.

The photo shoot gained a lot of attention on Twitter.

Some people noticed she was also barely showing off the brand.

Still, even though we're tired of the "is she or isn't she?" conversation, people can't help but love Jenner and her family.

If we think pressure from the public is going to get Jenner to crack, we're idiots. The heat she must feel from social media and the press has to be overwhelming, and honestly, kudos to her for keeping her life so private.

One source claims Jenner won't be telling us anything until her reported baby is actually born. So if you're holding your breath, keep holding. The insider told People magazine,

Kylie wants to disappear and be out of the spotlight and focus on her health and happiness... Kylie isn’t going to publicly address her pregnancy until she gives birth. She’s not doing any public appearances and just wanted to take six months off.

Has it been six months yet? Anyone?