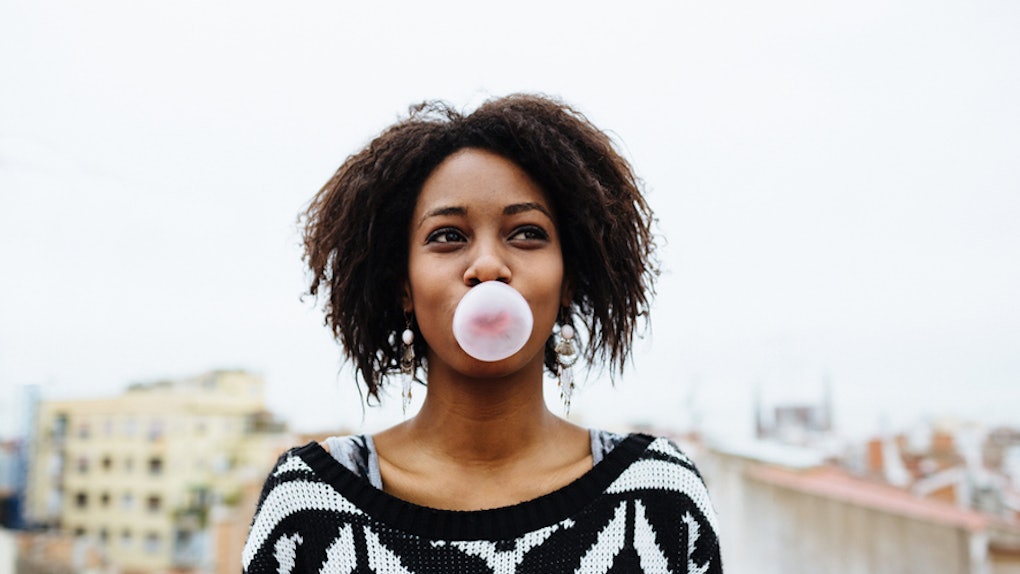 Sugar, spice, and everything nice. You're always feeling so sweet on your besties. It doesn't have to be Galentine's Day for you to constantly show your girls some love. Sure, that unofficial holiday does come with discounted candy and bottomless mimosas at brunch — but, you have a stash of memes in your camera roll ready at all times. What more could anyone ask for in a friend? You always try to give the best gifts, and truly want to be like Leslie Knope from Parks and Recreation, but your competition is fierce. The sweet girl is always so thoughtful, especially when it comes to birthday presents, but she really wants you to know a few things before you call her the cotton candy of your crew.

She's the one who wouldn't hurt a bug no matter how big and scary, and would just let it go outside. Growing up, everybody in school loved her because she always had something nice to say. She'd do anything for anyone, but also puts herself first. Over the years, she's fine-tuned her people-watching skills, and knows just when to leave the party for something way better. She's sweet, but getting called "cute" over and over again gets really old. To you, she might seem shy, and you've assumed she's even a bit introverted. But, before you go further, you should know these seven things that she probably wouldn't ever tell you herself.

This girl will always speak up, and not just to give a stranger a compliment from the other side of the street. When something really bugs her, she'll come out of her shell and call anyone out in her crew. Truth is, as sweet as she can be, it's all rooted in being the girl who cares too much, too.

You'll honestly love realizing this strong side of the "sweet" girl. She forever comes across as shy and optimistic, but being bold is her style, too. Don't be surprised if she ruffles some feathers from time to time, or lets her true colors show amongst a crowd. She'll have something positive to say at the end of it all, but her mind is sharp and she won't ever let it go to waste.

Seriously, don't mess with the girl who is always sweet. She's not all spring flowers and lollipops, and won't be afraid to break out the leather jacket in her world, as well. Nobody likes drama, especially when it comes to our girl crews. We're supposed to be lifting each other up, not tearing each other down! This girl knows that fact the best.

She'll be the first one to try and come up with a compromise, and call out whoever's in the wrong. Being 20-something is complicated enough, and the sweet girl understands that adulting is better when we're doing it together. She loves to keep the peace, kind of like a Libra, and strives for the beauty of balance in her life. So, anything that disrupts that calls for the daring side of her soul.

Social situations is where this girl is the sweetest. She loves surrounding herself with people — even the ones she doesn't know yet — and will always attract the brightest in the crowd. Holding conversations comes easy for her, and she'll use compliments and the like to get to know you a bit more. It's not all about being positive, and she loves making new friends wherever she goes.

Since she seems a little shy at first, you may assume that she's a bit introverted. Sure, she likes her alone time in the morning when she's still brewing her cup of coffee. But, on a Saturday night, she wants to be snuggled up with her besties or hitting the bar scene. Her boldest energy source is the inspiration she gets from living life in her beautiful world.

Out of everyone in her crew, though, she loves herself the most. She'll be down for every movie marathon and wine night with the girls, but she'll also take herself out to coffee shops and do some soul-searching in between.

Loving yourself is so key when you're in your 20s. Maybe you just landed your first job and are looking to stick to your self-care routine, or you don't want to fall into a risky relationship. The "sweet" girl compliments herself just as much, and she's always putting herself in that positive self-love mindset. She's learned that finding the bright side has made her life so much better, and plans on following all her passions just the same.

5. She Knows Her Worth

The girl with the sweet soul knows her worth, and that being somewhat of a "nice" girl comes with a tricky territory. People don't always show us the same kind of love that we deserve, and she's probably learned first-hand that life has a way of making you tough.

Whether it comes to her workplace or her relationships, she has her standards set and isn't going to get pushed around. Being sweet doesn't mean you can't be strong, and she'll speak up when somebody just isn't treating her right. In this way, you love this girl because she always stands up for herself and can hold her own. You don't have to worry that the world will get the best of her at any point in time — she has all of that self-love to keep her going and headed toward what's good.

This girl hates knowing that she didn't handle a situation the right way, or was the one to start the drama. After all, she really wants to keep the peace. She'll say sorry at some point, but she'll take time to process all of her emotions. Apologizing is most definitely her style, but she needs to be OK with herself before she can open up again and move on.

You'll rarely see this girl get into any sort of confrontation for this reason. Maybe she'll seem a little passive aggressive to her roommates when they don't do the dishes for the millionth time, or when her friend flaked on that coffee date. Her intentions are always good, but she's really just trying to never be in the wrong.

The girl you always call "sweet" loves paying attention to the little things. Once again, she's your fiercest competition in a gift exchange because she's always so thoughtful and listening to her friends. She'll give you something for your birthday that you mentioned one time during a shopping trip, and loves seeing your surprised face the second you realize what she did.

On any given day, she'll show up at your office with a cup of your favorite coffee or a sweet treat from a dessert spot down the street. Or maybe she'll send you a meme that she knows will make you laugh. Truth is, her thoughtful side is what constantly makes this girl so sweet and such a good friend to have around, too. You can't imagine not having someone who's always one step ahead of you, leading you into the best parts of life.

So, before you assume anything else about this girl, be sure to know a few things. Calling her "sweet" is so overrated, but she'll never tell you that herself, OK?