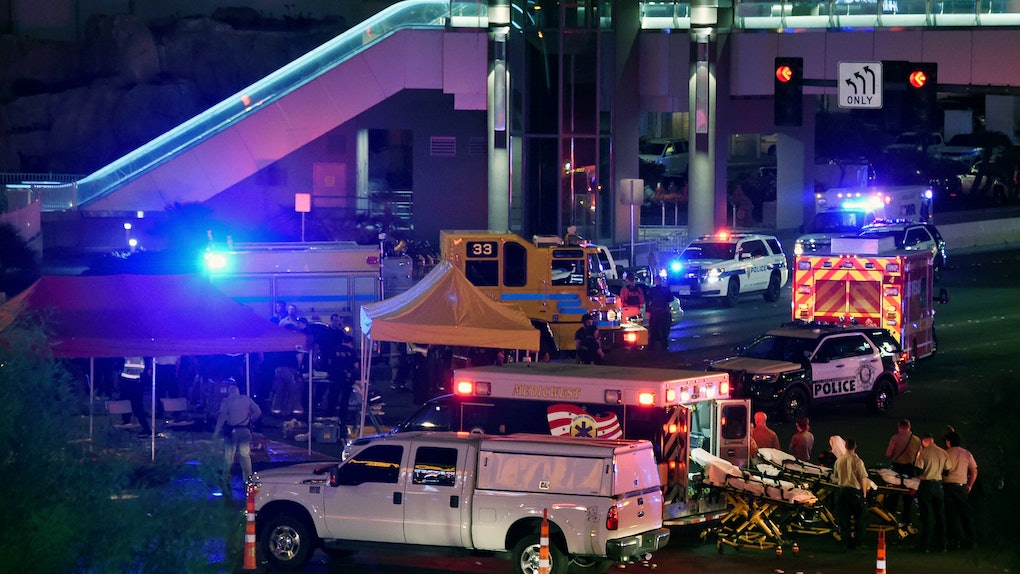 The NRA Response To Las Vegas Shooting Has Yet To Come, But Here's What We Know

On Sunday, Oct. 1, a gunman open fired from a Las Vegas, Nevada hotel in what has now been recognized as the worst mass shooting in U.S. history. According to Las Vegas Police Department Sheriff Joe Lombardo, at least 58 people have been confirmed dead, and over 515 were injured in the attack. The shooter has also been confirmed dead and is not believed to have a connection to any terrorist group. In the wake of this numbingly tragic incident, people are impatiently waiting for action to be taken by the National Rifle Association (NRA). While the NRA response to the Las Vegas shooting has yet to come, Hillary Clinton put out a call to action for the powerful gun lobbying organization in a series of tweets Monday morning, demanding that people need to take a stand, and something must be done.

The former Democratic presidential candidate began by offering her deepest condolences to everyone involved in the massacre and to the emergency response teams for their brave and speedy response to the scene.

Clinton then began to focus on "standing up to the NRA," urging people everywhere to demand greater gun control from the organization.

The NRA is the most influential gun rights lobbying group in the country, but we have yet to hear a response from the organization in regards to the Las Vegas shooting.

Las Vegas, we are grieving with you—the victims, those who lost loved ones, the responders, & all affected by this cold-blooded massacre.

The crowd fled at the sound of gunshots. Imagine the deaths if the shooter had a silencer, which the NRA wants to make easier to get.

Our grief isn't enough. We can and must put politics aside, stand up to the NRA, and work together to try to stop this from happening again.

Clinton's tweets have widely circulated the internet in just the span of a few hours, while the NRA remains silent on the matter.

However, NRA spokesperson and conservative radio host Dana Loesch did take to Twitter this morning to offer her condolences to the victims, but still left the NRA's official position on the recent events unknown.

Though it was expected, Loesch had no statement on the issue of gun safety.

Loesch did, however, advise one Twitter user to "temper their desire for politics" when they attempted to make their voice heard on the tragic Las Vegas shooting.

Searching through tweets of other NRA members and spokespeople won't do any good in getting information on their stance either. For example, if you look at Wayne LaPierre's Twitter page (LaPierre is the NRA's CEO and executive vice president), you'll see that it has been inactive for over five months.

His page is as inactive and silent as the NRA itself appears to be in this situation, with LaPierre's most recent tweet simply congratulating and praising President Trump back in April for defending the Second Amendment at an NRA convention.

Since taking the Oval Office, Trump has always made it clear that he fully supports the NRA, despite widespread criticism of the organization to take preventative action in response to the ever-growing, and ever more disastrous mass shootings like the one we just saw last night in Las Vegas.

Recently, the NRA began lobbying to make it easier for people to purchase gun silencers. According to Politico, South Carolina Rep. Jeff Duncan introduced a law in January that would accomplish this, and the bill is supposed to be up for a vote in the House soon.

With that in mind, waiting for the NRA's response to the Las Vegas shooting will probably continue to be frustratingly silent, especially since they've typically waited more than 24 hours to respond to serious events in the past.

However, if you'd like to help the victims of this tragedy while you wait for more information, there's so much you can do.

Aside from donating blood, you can also make your voice heard on the huge issue of gun control by contacting your congressmen and congresswomen, writing directly to the NRA, or contacting them at (800) 672-3888.

If you want to help the victims and others who have been affected by the mass shooting in Las Vegas in other ways, you can learn more here.