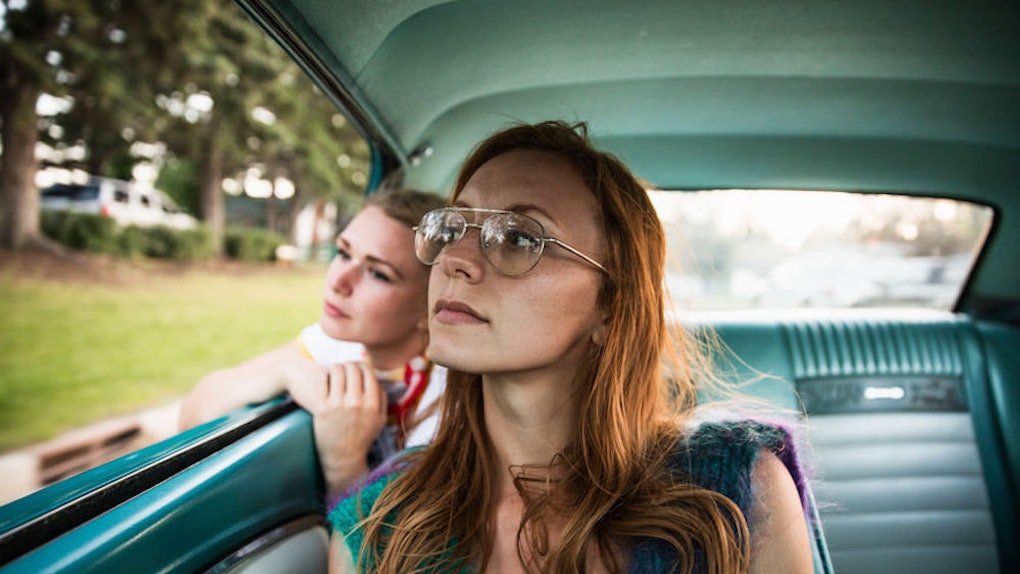 A girl in your friend crew is a bit old-fashioned. She's quite possibly the next Molly Ringwald, and puts that faded filter on all of her Instagram photos. She isn't a huge fan of technology; she'd rather take road trips and see the world in her spare time. All in all, she has such a unique personality, and you want to understand her world just a little bit better. Right now, you're assuming it's all about vintage clothes and quaint coffee shops. But, there are some key things you should know about the girl who is old-fashioned, because that's not quite the case.

Yes, she is the one you want to take along when you go thrift shopping. But, there's a lot more to this girl than being able to find a one-of-a-kind Balenciaga jacket from the '70s at a discounted price. She may have grown up with Audrey Hepburn as her role model, and isn't the only person on this planet who was probably born in the wrong decade. You'll never find her following a crowd, and she's memorized lines from all of her favorite black and white films. Truth be told, she may have a bit of an artsy side, too.

What you don't know about her, though, is that beyond the surface, she's a quirky individual you really need to get to know. Some would probably call her a "flower child," and it shows in her carefree spirit and old-fashioned soul. Here are seven things you should know about her, especially if you want to be her friend.

1. She Was Probably Born In The Wrong Decade

This girl was likely born in the wrong decade, and she knows it. She loves vintage records and furniture, and always has a polaroid camera on hand. Not to mention, she's always listening to music that's a little bit off the mainstream. She'll put on those oldies hits from bands like The Beatles or The Rolling Stones, and some people in the crowd won't know even a single word. (Ugh! Is time travel a thing, yet?)

2. She Hates The Modern Dating Scene

The old-fashioned girl in your crew is a true romantic. She firmly believes that chivalry isn't dead, and expects her dates to hold open doors and take her out dancing on a Saturday night. It's not that she's unaware that dating nowadays is a bit different; she just hates the modern scene that's all about finding love over apps and screens. Her style is more sipping milkshakes at a local diner with the cute neighbor who's always been hanging next door.

3. She'd Rather Stay In On A Saturday Night

Staying in on a Saturday night instead of hitting up a bar is so underrated (in my personal opinion). But, the girl who's a bit old-fashioned started this trend, and sticks to it almost every single weekend.

She's still quite the social butterfly, and has a big group of friends who love her for all of her quirks. But, she'd rather pop in an old film like Breakfast at Tiffany's and watch her idol, Audrey Hepburn, fall in love with New York City. These stories never get old, no matter how many times she's seen the same movies. Standing in a crowded bar waiting for a drink definitely does, though.

4. She Embraces Her Quirky Side

This girl's quirky side is what makes her such a rad person to hang out with. Being a bit old-fashioned means you're not exactly like everyone else, and that's amazing in itself. I mean, who wants to be a copy when you can be original, right?

Where some may find her sense of humor to be a little outdated, or her fashion to be out of touch with the recent trends, she owns it. Her friends love it, too, and always ask her to go shopping with them because she's a pro at finding those unique pieces. Vintage Coach mini backpack? Check!

5. She Daydreams All The Time

Personally, I can relate to the girl who's a bit old-fashioned because she's a daydreamer, just like me. She's constantly in her head, wondering what it would be like living in another decade and transporting herself through time. She can visualize it all, and is quite often disappointed when she comes back down to Earth.

Imagine what it would've been like to be at Woodstock in the '60s, or run around the city at night like Sarah Jessica Parker in Girls Just Want to Have Fun. I don't know how I'd feel about wearing leg warmers, but I could definitely be down for a dance competition and falling in love.

6. She Has A Pretty Simple Coffee Order

Being old-fashioned means keeping things fairly simple, too. You may feel so overwhelmed by the fast pace of life nowadays, and the fact that your local coffee shop's menu is the size of a novel. But, this girl doesn't bother with all of the fuss, and sticks to a cup of caffeine that others would consider average.

Truth is, you can tell a lot about someone from their coffee order. If a girl orders something with a extra whipped cream, she's probably super positive and fun to be around. The old-fashioned girl will go for a classic hot coffee with cream and sugar, though. This shows that she's low-maintenance and as classic as they come.

7. She Gives The Best Advice

Sometimes tales are as old as time, and the girl who is old-fashioned has the best advice, because she understands that some things never change. Sure, the dating scene may be different now, but falling in love is the same feeling no matter what decade you're in. So, she always knows exactly what to say when her friends come to her looking for a reliable shoulder to cry on.

She'll pull from stories that her grandparents told her, books from classic authors, and old films that have taught her the most about life. Her vintage clothes one day may be totally out of style, but those words of wisdom will always be true.