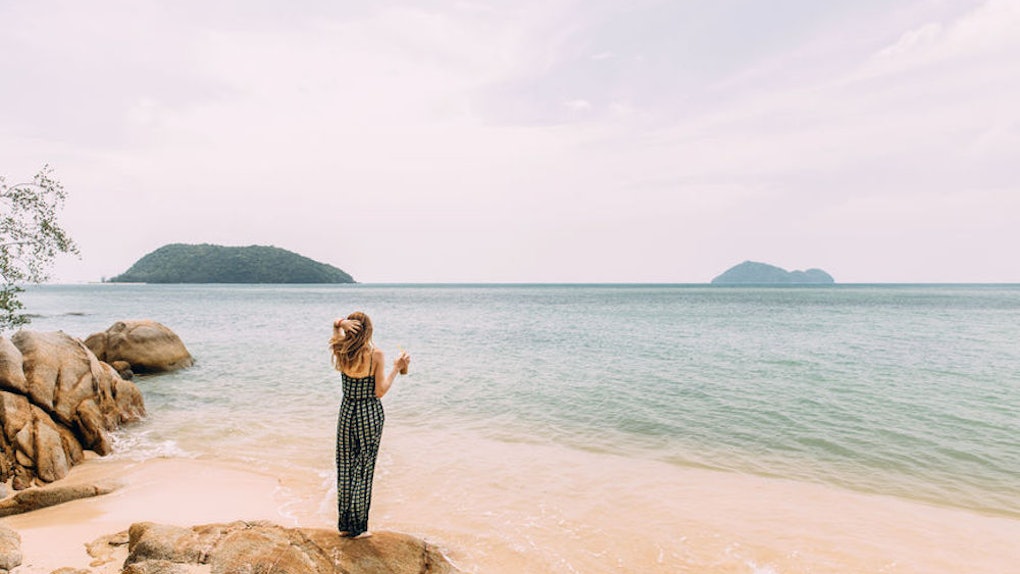 Do you have your head in the clouds? If so, you've probably been called a daydreamer. You spend most of your time in your thoughts, and are always in the midst of some dreamy idea. Out of your friend crew, you may be the creative one, or girl who is so passionate about living life to its fullest. What can you say? There's just a whole world of possibilities out there, and most of them already exist in your head. When you're a daydreamer, you know that there are some things that are just too true. Don't worry, though, you're not the only one.

I've been a daydreamer for as long as I can remember. I'd get caught spacing out in school sometimes, and my friends would have to bring me back down to Earth. Most of the time, I was thinking about traveling or where in the world I wanted to be. The streets of Florence were always so lovely, or even somewhere tropical when it was the peak of winter. It's safe to say, those visuals haven't changed much over time.

Maybe you're imagining similar things, too, or just have pizza on your mind. It's going to sound cheesy, but I honestly love daydreaming, and I like to think it's OK sometimes to have your head in the clouds. If all of this already sounds super familiar, then these seven things are probably pretty relatable, as well. Read them before you take flight again, OK?

1. You Fall In Love So Easily

If you're a daydreamer, then you're likely falling head-over-heels on the reg. Whether it be with people, places, or just the little things (like how the barista at Starbucks knows your order) — you just can't seem to slow down your feels.

Some would say you're constantly looking at life with a pair of rose-colored glasses, and I guess you can't quite disagree. Living life with a lot of love, though, makes it pretty blissful. You love those moments that feel like a movie, and have accepted your emotions for everything that they are.

2. You're A Very Visual Person

Daydreaming means that you have images running through your head all day long. Maybe some are inspired by posts you saw on Instagram, and others are just you wandering around Europe instead of being stuck at work. You're always trying to make the picture perfect, and tend to respond best to visuals and colors in the real world, too.

Personally, I rely mostly on my eyes when I'm trying to understand just about anything. I'm bound to pick up an idea way better if you drew me a picture, than if you told a story. It's just how my brain works, being a daydreamer and all. If this sounds familiar, then you know it's just too true.

3. You Play Out Conversations Before They Happen

Leave it to a daydreamer like you to always have the right words to say. That's because you've likely played out the conversations in your head way before they've even happened. You know the people in your crew well enough to imagine what they'd say, and then immediately create responses. I suppose that means you're always prepared, and never truly caught off guard in the moment.

However, you're still human and often leave some things left unsaid. Sometimes the dialogue doesn't go quite as according to plan, or even happen at all. Well, maybe next time, huh?

4. You're Always A Little Disappointed

Sometimes, reality just doesn't live up to our daydreams, and you've sort of learned to expect that by now. When you're a daydreamer, you're always imagining the best possible scenario. You're picturing what it would be like if you finally got out of your own way and moved to the West Coast, or found your soulmate. Sure, those things may happen someday. But, it's hard not to get let down when you realize that in the moment that's just not reality.

As a daydreamer, though, you've learned to keep your head up. You know that these things are still totally possible, and work every day to make it so. Where you may be a little disappointed, you've also found a purpose.

5. You Can Be Unpredictable

As soon as you get an idea in your head, you have to run with it. That's just part of being a daydreamer. But, it's lead your friends to believe that you can be a bit unpredictable. You may flake on plans to chase after an adventure that seems more ideal and inspiring, or book a trip totally out of the blue. You just want reality to finally mirror what's happening in your head.

For me, it's always when I get a creative vision going that I can't seem to let go, and become a little whimsical. In those moments, my brain is totally focused on anything but reality, and somebody has to bring me back down to Earth.

6. You're Not So Good At Living In The Present

On the one hand, living in the present probably isn't your forté if you're a daydreamer, like me. As much as you try to soak in the moment, you just always seem to find your mind drifting off. Especially when you're in a particularly boring situation, how could you not dream about pizza or meeting someone like Paolo from The Lizzie McGuire Movie in Rome?

On the other hand, though, you can be incredibly good at disconnecting. Where some people stick to their screens like glue, you don't mind leaving your social media apps behind for some relaxation or a better version of reality. Truth is, there's always something dreamy going on in your head that could never be truly captured on the 'Gram.

Being a daydreamer means you're constantly doing your own thing. You've never been interested in following the crowd, and probably won't change down the road. You have your own dreams and passions that you can pretty perfectly visualize. All you have to do is get to them, and you have the energy and strength to do that, too.

Sure, some people will be totally content working nine to five, but you have bigger plans. You don't ever want life to feel boring or unoriginal, so you'll be relying on your own idea of the real world from here on out. I don't doubt that you'll absolutely get to where you're going. After all, I'm a daydreamer, and know that these things are true, too.