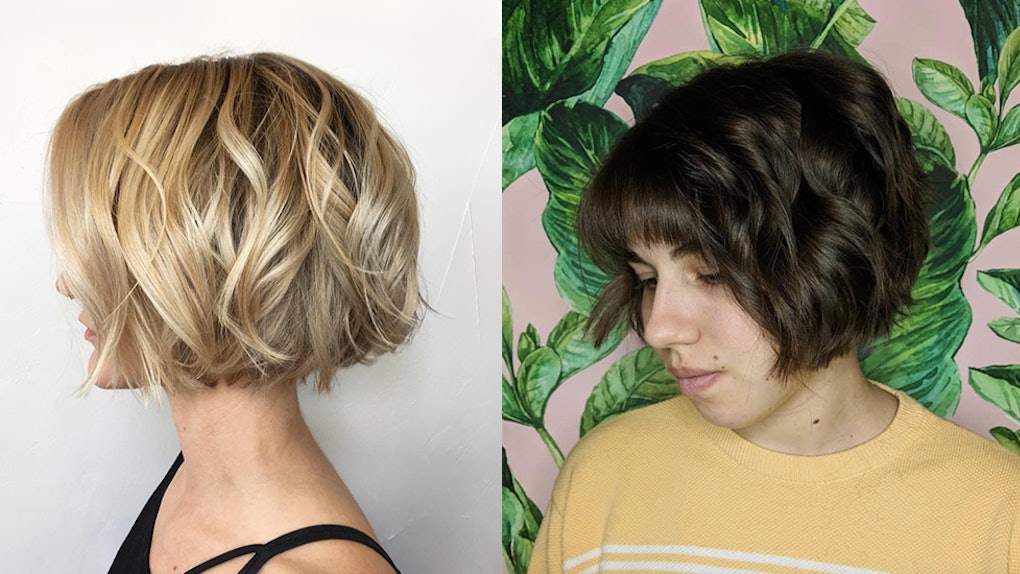 The Chin-Length Bob Haircut Trend Is Taking Over, So Expect Short Cuts On Everyone In 2019

You know that scene in Mean Girls where one girl says, "I saw Regina George wearing army pants and flip flops, so I bought army pants and flip flops?" Something similar is happening in the hair world right now, because as soon as I saw Hailey Baldwin (ahem, Bieber, sorry) chop her hair off earlier this week, I instantly felt the urge to do the same. The chin-length bob haircut trend is about to reach the same level of popularity in 2019 that the lob achieved in 2018 — and while a lob was a not-to-dramatic change from longer locks, a chin-length bob is only for the bold.

If you were trying to grow out your locks to rock long, beachy waves by summertime, prepare to be disappointed, because celebrities are definitely proving that shorter strands are in. Hailey Bieber is no stranger to short hair, and she just recently took her lob look even shorter with a few extra inches off the bottom, resulting in a super short chin-length bob. Of course, the model pulls it off effortlessly, not that I ever doubted she could. In fact, the chop actually draws more attention to her fab jawline, and even though I don't have a fab jawline myself, I'm starting to think I might need to book a haircut.

Like I said, Bieber (Hailey, not Justin!) is no stranger to a short cut:

But while I've got your attention, I'd like to just point out that as usual, my girl Kim K did it first! TBT to her middle school 'do:

According to Linda de Zeeuw, Master Stylist at the Rob Peetoom Salon in New York City, it's not just celebs who are opting for dramatic haircuts this season: based on her client's requests, it's clear that bobs are back in a big way for just about everyone. "A frequently requested hairstyle is the blunt bob," says de Zeeuw. "Chin length or just above the shoulders and everything in between, with some soft texture in the top layers to create dimension and movement."

My personal favorite thing about the bob? It's the easiest way to instantly part with all those crispy split ends weighing down your hair:

I'm especially into super short bobs with some fringe, because seriously, how chic and French does a bob with bangs look?

Too scared to get the chop? There are a few ways to test it out in advance and determine if short hair will suit you before you grab the scissors. You could pull a Jordyn Woods and create a faux-bob by tucking your locks into the opening of a turtleneck to create the illusion of bobbed hair. Or, copy her BFF Kylie and invest in a cute, chin-length wig.

Jordyn does this trick a lot in photoshoots as a way to change up her look:

Kylie's icy blonde bob paired with a red beanie is such a good winter mood, IMHO:

But to be clear, my own personal fascination with the chin-length bob began way back in May, when Zendaya slayed the Met Gala with her Joan of Arc-inspired look:

My original hesitation about going super short myself was that it wouldn't be interesting — you can't do too much for a bob in terms of styling, after all. I felt like a lack of ponytails or braids would leave me bored and consistently looking the same. However, the more I deep dive into the world of beautiful bobs on Instagram, the more I realize that color and texture can really spice up the look of a chin-length cut.

Like hi, I dare you to tell me this bright bob is boring:

And I'm sorry, but it's just a known fact that luscious curls make every look better:

But I will say, something about a stick-straight, no-nonsense short bob is just so sophisticated and glam:

Hailey Bieber's new chop has definitely reignited my love for the chin-length bob, and while I personally still have cold feed about dramatic haircuts, there's no doubt this is one we'll be seeing a lot of in 2019. Will I end up saying "thank u, next" to my long hair and trying out this celeb-approved cool-girl cut? Probably not because I'm boring AF, but hey, at least I can admit it.

More like this
Olivia Rodrigo Debuted New Bangs Ahead Of Her "Deja Vu" Release
By Margaret Blatz
Cardi B Is Dropping A Hair Care Line Sometime In 2021
By Margaret Blatz
How To Get A Trendmood Box, AKA The Next Big Thing In Beauty Box Subscriptions
By Bella Gerard and Theresa Massony
Stay up to date