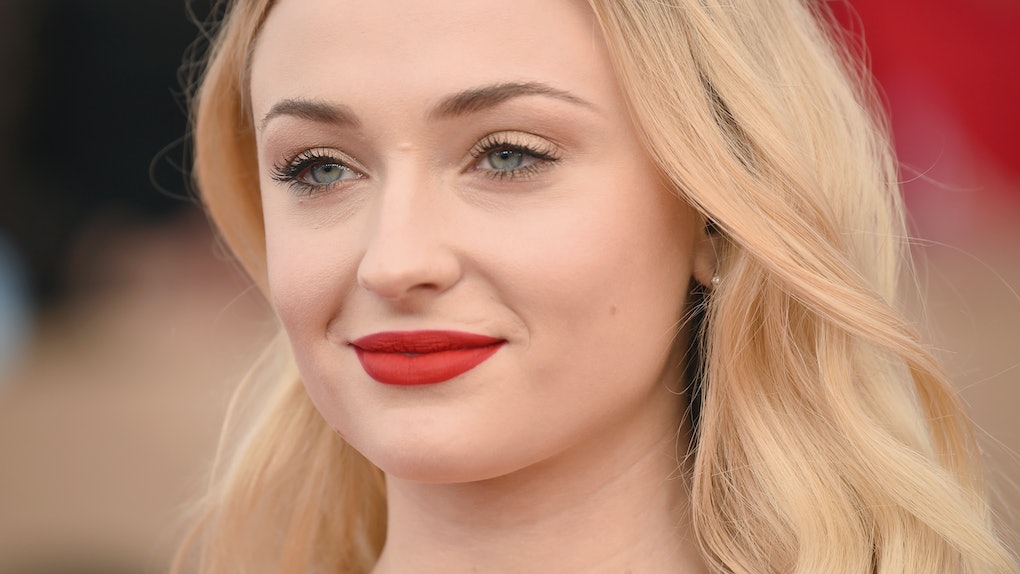 Sophie Turner's Reaction To Joe Jonas' Proposal Is So Sweet

Sophie Turner and Joe Jonas are engaged, and I couldn't be happier. With all the breakups and messed up sh*t happening in Hollywood, it's great to see a blossoming and healthy relationship. Their engagement was just publicly announced on Oct. 15, and I already want to know every little detail about it. More specifically, Sophie Turner's reaction to Joe Jonas' proposal — how does one respond to a Jonas brother getting on one knee? As it turns out, Turner was actually really surprised and her response was so, so sweet.

According to a source from Us Weekly, Jonas definitely had the element of surprise on his side. Reportedly, the engagement was not expected by Turner and he "totally surprised" the Game of Thrones actress. The source spilled,

You know when your celebrity crush actually turns out to be as sweet and considerate as you dreamed they would be? Yeah, I'm kind of having that moment.

The couple announced the big news via matching Instagram posts. The photo featured Jonas and Turner holding hands with the new engagement ring sparkling front and center. Turner's post was captioned with "I said yes." Jonas also opted for a simple phrase, writing, "She said yes."

The pear-shaped diamond floats above a double band that is wrapped in diamonds. According to gemologist appraiser Deborah Villepigue from The Jewelry Appraiser, as reported by Teen Vogue, Turner's three carat (and then some) diamond ring costs somewhere between $25,000 and $30,000. Only the best for the new bride.

Turner and Jonas seem very much in love and happy with each other. Speaking with U.K.’s The Sunday Times in July, Turner mentioned Jonas when she said, “I’m in a relationship, but it’s a very private relationship.” She added,

I very much isolated myself for a while and forgot what was fun. Going out with friends, going out to eat, not really having a care. And people I've met recently in my life have drawn me out of that. It really helps you own those insecurities. The things I tortured myself about before, I can forget about.

She continued, “I’m happier than I’ve been in a very long time."

So sweet. One thing that connected Turner and Jonas was being in the entertainment industry. They truly understand each other's schedules and what it's like to be in the public eye.

In the May 2017 issue of InStyle magazine, Turner noted again that she prefers to “keep things pretty private” relationship-wise, but did explain the upside of dating another celebrity. Turner explained that it's helpful to have someone who really understands,

Totally makes sense. Turner and Jonas received an outpouring of support after revealing the big news of their engagement. Nick Jonas was quick to retweet the photo of the pair's engagement announcement with the caption,

Ahh! Congratulations to my brother... and sister in law to be on your engagement. I love you both so much. @joejonas @SophieT

Sister-in-law Danielle Jonas chimed in with congrats, and both Jonas parents also posted about how excited they were to have Turner join the family.

Ugh, can I also join the Jonas family? Nick is my only hope. OH GOD, I MUST GET TO LOS ANGELES, STAT. Although that will probably never happen for me, Turner and Jonas' engagement is definitely on track and I could not be more excited.

Congrats to Joe and Sophie. Wishing you both the very best!

More like this
Is Taylor Swift's "Mr. Perfectly Fine" About Joe Jonas? Sophie Turner's Instagram Has Fans Curious
By Brandy Robidoux
Olivia Rodrigo's Reaction To Getting Her First Parking Ticket Was Priceless
By Brandy Robidoux
This 2021 'Game Of Thrones' Season 8 Trailer Is So Confusing... & So Good
By Ani Bundel
Stay up to date